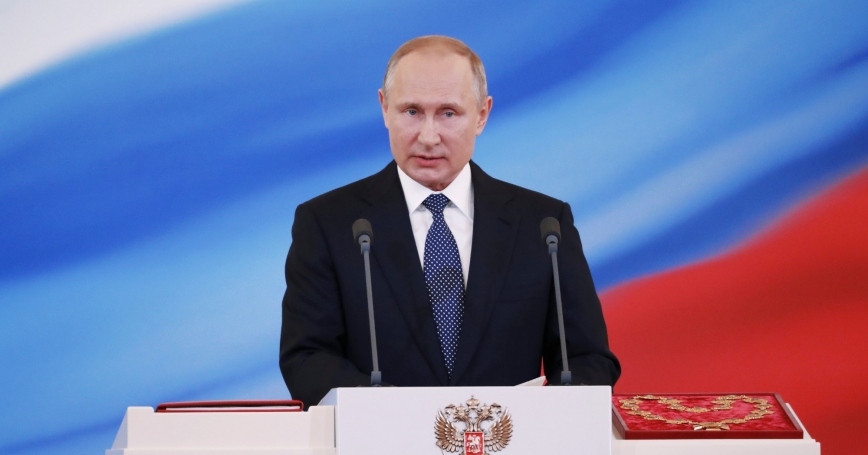 Vladimir Putin is sworn in as president during an inauguration ceremony at the Kremlin in Moscow, Russia, May 7, 2018

On the eve of his visit to Washington, French President Emmanuel Macron sent a strong signal to the Kremlin. He told Fox News, “We should never be weak with Russian President Vladimir Putin. When you are weak, he uses it." But at its peril, the Kremlin often seems hard of hearing when it comes to listening to Europeans.

Speaking on March 27 about the expulsion of Russian diplomats by European countries in protest against the chemical weapons attack on British soil against former spy Sergei Skripal and his daughter, Russian Foreign Minister Sergei Lavrov dismissed the reactions as the result of U.S. “colossal blackmail.” Aside from insulting the Europeans, Moscow underestimated their independence and will.

Perhaps because of the character of its own power, Russia overrates the efficacy of the military and underrates the value of political and economic assets. Seen through this outdated prism, Europe appears to the Kremlin as America's weak sister. This miscalculation has led Russia repeatedly to err, as shown by decades of frustrated efforts to divide Europeans and split them from the United States.

Russia overrates the efficacy of the military and underrates the value of political and economic assets.

Tens of thousands of Europeans protested in the streets against the NATO plans, but the alliance maintained consensus. All five basing countries deployed the NATO weapons. Without European steadfastness, the treaty signed in 1987 to destroy all such missiles on both sides would not have been possible.

In the 1990s, Moscow sought to frighten Europe from enlarging NATO's membership to take in Poland, the Czech Republic, and Hungary — all former members of the Warsaw Pact communist alliance. Despite bellicose Kremlin rhetoric, Europeans remained firm.

Enlargement proceeded in 1999 and continued in several more stages, thereby guaranteeing security to more than 100 million people in the newly democratic Central and East European countries. The value of this security was made clear when in 2014 Russia invaded Ukraine.

In 2016 amid debate in Germany about its acceptance of one million refugees, Russian propagandists falsely claimed that a 13-year-old Russian-German girl had been raped by migrants. Even after German police proved the story to be fake, the Kremlin disinformation did not let up. Resentment of such tactics by Moscow has contributed to a decline in Russia's, and Putin's, image in Germany.

This remarkable arrogance by a country that has helped destroy Syria can only set back Moscow's hopes of garnering EU support.

In January this year Vladimir Chizhov, Russia's representative to the European Union, warned that Europe would “bear responsibility” if it failed to dispense “dozens of billions” of euros to rebuild Syria. This remarkable arrogance by a country that has helped destroy Syria can only set back Moscow's hopes of garnering EU support.

Enveloped by a cocoon of anti-Western propaganda, Russian decisionmakers may have difficulty separating fact from fiction. Often possessed by a Soviet, zero-sum mindset, they seem to understand Europe poorly. Putin's only extended exposure to Europe was as a KGB agent in communist East Germany, a place far from representative of today's Germany.

These mistakes help European governments maintain unity of purpose in dealing with Russia. In 2014 after Russia's illegal annexation of Crimea and its onslaught in eastern Ukraine, some worried the EU consensus on sanctions, which must be renewed every six months, might falter.

Four years later the sanctions not only remain in force but have been strengthened. NATO has reinforced its troop rotations in Poland and the Baltic states, and militarily non-aligned Sweden and Finland, worried by Russian bellicosity, have concluded close partnerships with the North Atlantic alliance.

Meanwhile, the struggle for hearts and minds continues. In both Western and Central Europe, support for Putin's authoritarian rule persists among populists of both the Right and Left. The outcome of recent elections in Italy is particularly troubling. Moreover, Moscow is actively trying to undermine struggling new democracies in the Balkans, hoping to prevent their joining the Euro-Atlantic community.

Overall, however, Russia's foreign policy has stiffened Europe's will. As in the Soviet period, Europeans and Americans can thank the Kremlin for shoring up Western resolve.

William Courtney, adjunct senior fellow at the RAND Corporation and executive director of the RAND Business Leaders Forum, was U.S. ambassador to Kazakhstan and Georgia and special assistant to the president for Russia, Ukraine, and Eurasia. Michael Haltzel, senior fellow at Johns Hopkins University's Center for Transatlantic Relations, was Democratic Staff Director for Europe on the Senate Foreign Relations Committee and advisor to Joseph R. Biden, Jr. The views and opinions expressed in opinion pieces do not necessarily reflect the position of The Moscow Times.

This commentary originally appeared on The Moscow Times on May 9, 2018. Commentary gives RAND researchers a platform to convey insights based on their professional expertise and often on their peer-reviewed research and analysis.