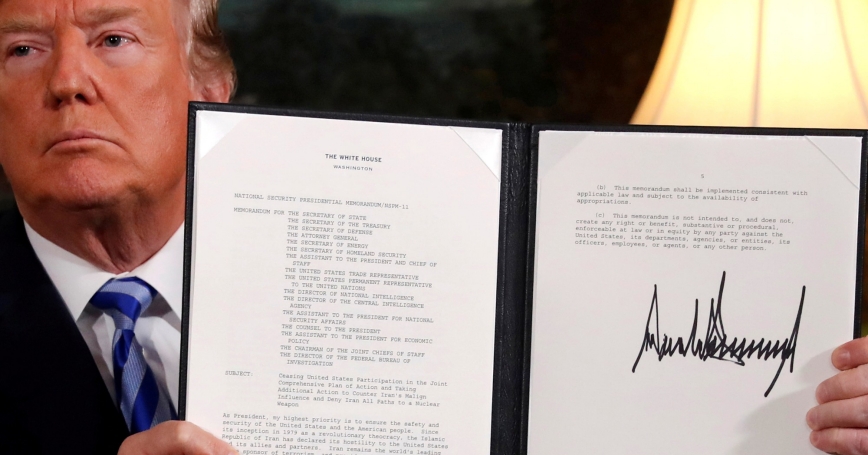 U.S. President Trump signed a proclamation declaring his intention to withdraw from the JCPOA Iran nuclear agreement at the White House, May 8, 2018

Many regard the invasion of Iraq as the worst foreign policy move in the history of the American republic. Now we arguably have a competitor. The decision to abandon the nuclear agreement with Iran isolates the United States, reneges on an American commitment, adds to the risk of a trade war with the United States' allies and a hot war with Iran, and diminishes the prospects of a durable and truly verifiable agreement to eliminate the North Korean nuclear and missile threat.

The worst consequences would be a nuclear-armed Iran or a war with Iran, or conceivably both. These outcomes may yet be averted. At this point the initiative has moved to the other six signatories of this agreement and particularly the European NATO allies. Britain, France, and Germany have stated that they will continue to abide by the accord and will seek to persuade Iran to do the same. Iran has agreed to do so as long as the Europeans can ensure that Tehran continues to secure the full benefits promised by the agreement. Doing so will require the Europeans to rebuff American efforts to punish their companies from trading with Iran.

This situation is not unprecedented. In 1982, responding to the imposition of martial law in Poland, President Ronald Reagan sought to punish companies helping to build a gas pipeline between the USSR and Western Europe. The Europeans threatened to retaliate against American firms and Reagan eventually backed down. In 1996, this pattern was repeated. Congress passed a law penalizing European investors in Cuba. The Europeans filed a case in the World Trade Organization and threatened retaliation. President Bill Clinton backed down.

President Donald Trump has shown less regard for Western solidarity than any of his predecessors.

It took months of transatlantic confrontation before these two disputes were resolved. It's likely to be harder this time around. The volume of trade potentially affected is now much larger, the transatlantic relationship is already much worse than it ever was under Reagan or Clinton, and President Donald Trump has shown less regard for Western solidarity than any of his predecessors. This time the breach may not be healed.

Trump is right to point with concern to Iran's destabilizing regional behavior, but the attention he devotes to it seems out of proportion to the actual threat to American interests. Islamist groups affiliated with Islamic State and al Qaeda are presently conducting insurgent campaigns in Nigeria, Mali, Niger, Somalia, Libya, Egypt, Syria, Iraq, Yemen, Afghanistan, and the Philippines. U.S. troops are engaged in 10 of these countries, all except Egypt. Of these 11 conflicts Iran is engaged in only three: Syria, Iraq and Yemen. It is backing the opposite side from the United States in only one, Yemen. Curbing irresponsible Iranian behavior is a valid objective, but it will do little to address the threat to the U.S. homeland and is hardly the key to a more tranquil Islamic world.

Saudi Arabia and Israel back Trump's decision. As support goes, that is about it. No European or Asian ally supports the U.S. withdrawal. No major power supports it. No member of the G-7 or the G-20 supports it. Absent such international backing, it is hard to see how the U.S. administration can achieve any of the goals for its new policy Trump announced on Tuesday.

James Dobbins is a senior fellow and Distinguished Chair in Diplomacy and Security at the nonprofit, nonpartisan RAND Corporation, a former assistant secretary of state, and the author of “Foreign Service: Five Decades on the Frontlines of American Diplomacy.”

This commentary originally appeared on Reuters on May 9, 2018. Commentary gives RAND researchers a platform to convey insights based on their professional expertise and often on their peer-reviewed research and analysis.