The Quad: Second Verse, Same as the First? 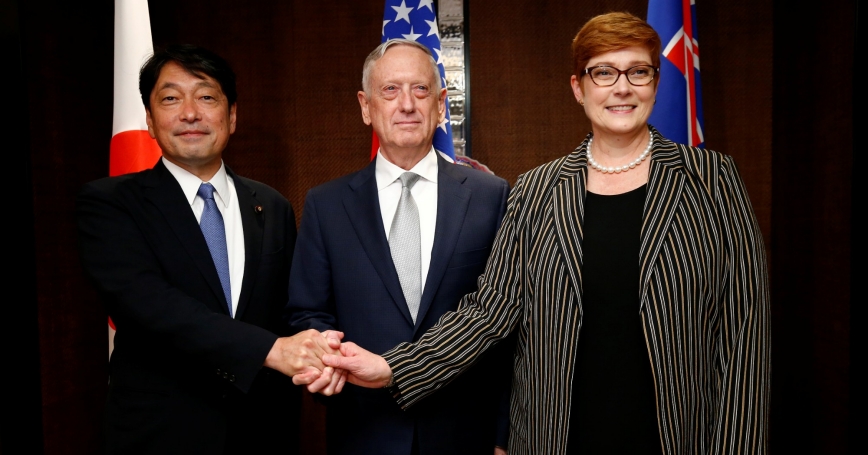 The recently concluded Shangri-La Dialogue focused heavily on China's conduct in the South China Sea, unfolding developments in nuclear diplomacy with North Korea, and the potential strategic contours of “a free and open Indo-Pacific.” Little mentioned, however, was the quadrilateral security dialogue — known as “the Quad” — an informal collaborative arrangement among the United States, Japan, India, and Australia. J. Berkshire Miller, a senior visiting fellow with the Japan Institute of International Affairs, tweeted shortly after the gathering's conclusion that it received “almost no institutional backing [in] high-level speeches.” While a compact of this nature would seem sensible, especially amid growing concern over the postwar order's erosion, it has once again failed to take flight.

Conceived a little over a decade ago to facilitate greater strategic coordination and cooperation between four of the world's democratic pillars, the Quad foundered over Australian concerns about ruffling China. The construct appeared to have gained a new lease on life, however, when officials from the four countries met on the sidelines of the Association of Southeast Asian Nations Summit this past November. As during its first incarnation, though, its members have proven incapable of adopting either a shared understanding of or unified policies toward China.

The United States has explicitly cast China as a rival: the Trump administration's national security strategy concludes (PDF) that “China seeks to displace the U.S. in the Indo-Pacific region,” and the Pentagon's defense strategy goes further, predicting (PDF) that it “will continue to pursue a military modernization program that seeks… displacement of the U.S. to achieve global preeminence in the future.” While the two countries had taken modest steps last month to avoid a trade war, President Donald Trump is set to impose $50 billion worth of tariffs on Chinese exports in retaliation for discriminatory Chinese technology policies, and has further announced that recently enforced U.S. tariffs on steel and aluminum imports from the European Union, Mexico, and Canada would also be applied to any such imports from China.

None of the other three countries in the Quad endorse aggressive trade measures of this kind. In addition, while each has serious concerns about China's strategic ambitions, their policies reflect its growing economic heft: Beijing is the second-largest trading partner for Japan and the top trading partner for India and Australia.

Tokyo, for example, has avowed that Beijing's attempts to alter the status quo in the East China Sea “are absolutely not acceptable,” and has expressed support for the Trump administration's Indo-Pacific framework — of which China is leery. Still, it has agreed to help finance Beijing's flagship geoeconomic project, the Belt and Road Initiative (BRI). Wang Yi's visit to Japan in April, meanwhile, marked the first such trip by a Chinese foreign minister since November 2009, one of a few recent developments that suggest a thawing of Sino-Japanese ties.

New Delhi, too, has significant tensions with Beijing. Last year saw a 73-day standoff between the two countries' armed forces in a remote stretch of the Himalayas. More recently, India declined to endorse the BRI at an April meeting of the Shanghai Cooperation Organization's foreign ministers, because one of the initiative's major components, the China-Pakistan Economic Corridor, runs through a disputed area of Kashmir. India is, nonetheless, the second-largest shareholder of the Asian Infrastructure Investment Bank and a member of another significant BRI component, the Bangladesh-China-India-Myanmar Economic Corridor.

For its part, Canberra is undergoing a painful debate over its relationship with Beijing. Its 2017 foreign policy paper warned (PDF) that “China is challenging America's position” in the Asia-Pacific, and government officials and thought leaders have increasingly warned that China is subverting the country's democratic institutions. But other influential voices in Canberra caution that it should proceed judiciously, taking care not to jeopardize economic ties: in 2016–17, close to 30 percent of Australia's exports went to China (PDF).

There are numerous areas in which the United States, Japan, India, and Australia can intensify their collaboration.

There are numerous areas in which the United States, Japan, India, and Australia can intensify their collaboration. The Diplomat's Ankit Panda notes that officials from the four countries identified seven priorities at their last meeting, ranging from “freedom of navigation and overflight in the maritime commons” to “the North Korean threat and nonproliferation.” Grouping them under the Quad heading, though, overstates both the level of strategic convergence that exists among them now and the level that they should be expected to achieve. For starters, given Trump's preference for bilateral dealings, it is unclear how much the United States would invest in a multilateral grouping of this nature while he is in office. And, as suggested above, the countries are of different minds on handling China's resurgence. Seeing Beijing's technological progress as a growing national security challenge, Washington is inclining toward a more zero-sum conception of bilateral relations. Tokyo and New Delhi are sustaining increasingly difficult balancing acts with aplomb. Canberra, meanwhile, is highly conflicted about how to proceed.

Senior officials from the Quad convened again on June 7, and Asia-Pacific watchers will be closely monitoring what substantive outcomes, if any, emerge from their conversations. So long as the aforementioned differences persist, though, there is little reason to believe that the present iteration will fare much better than its predecessor.

This commentary originally appeared on The Diplomat on June 15, 2018. Commentary gives RAND researchers a platform to convey insights based on their professional expertise and often on their peer-reviewed research and analysis.