Is India the Weakest Link in the Quad? 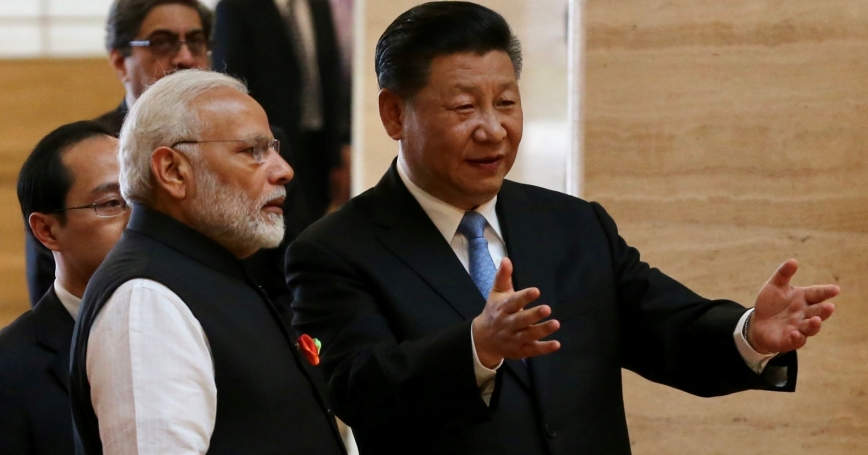 Since the Trump administration's announcement that it seeks a “free and open” Indo-Pacific, observers have spilled much ink on the revival of the Quadrilateral Security Dialogue, or Quad, to achieve this objective. The Quad—an informal consultative mechanism comprising the United States, Australia, Japan, and India—is quietly opposed to China's continued militarization of and attempts to control strategic waterways throughout the region, namely the South China Sea. The group met most recently last November, and again in June, after 10 years of inactivity.

But the fate of the Quad is still fragile. Indeed, the first attempt at the Quad died on the vine because then-Australian Prime Minister Kevin Rudd withdrew over concerns that the Quad needlessly antagonized China. Today, however, following a burst of concern about Chinese influence, Australia is all in. So are the United States and Japan. That leaves India, where New Delhi may be getting cold feet.

For starters, India seemed less enthusiastic about the Quad following the Wuhan summit. In April, Chinese President Xi Jinping invited Indian Prime Minister Narendra Modi to Wuhan, China, for an informal summit. Xi's decision proved to be exceptionally deft diplomacy. Bilateral relations had reached a nadir in 2017 primarily stemming from the monthslong military standoff at Doklam, which probably hastened India's decision to re-engage the Quad in the first place. Although the two leaders did not issue a joint statement—underscoring their deep differences—they also agreed to find ways of working together.

Australia, the United States, and Japan are all in. But India may be getting cold feet.

Shortly after Wuhan, New Delhi decided to reject fellow Quad member Australia's request to participate in Malabar military exercises along with the United States and Japan. To be sure, this was the fourth year in a row India had rejected Australia's participation, but the timing—the day following Wuhan—has widely been interpreted as a concession to Beijing. While there are reasonable Indian explanations for the decision, the timing seems unfortunate. Bringing Australia into Malabar for the first time would have sent a clear message that the naval component was active and that the Quad was unified, and rejecting Canberra sent the exact opposite message.

The second indication of trouble for India's participation in the Quad arrived in June at the annual Shangri-La Dialogue in Singapore. Modi gave the keynote address, and while he spoke of the need to ensure a peaceful and stable Indo-Pacific region, matching Quad objectives, he nevertheless declined the opportunity to invoke the Quad and instead noted that “India does not see the Indo-Pacific Region as a strategy or as a club of limited members.” He further avoided criticizing or even mentioning China's military expansion and growing assertiveness in the South China Sea. Modi's comments stood in marked contrast with U.S. Defense Secretary James Mattis's speech, which heavily criticized Chinese actions.

Instead, Modi offered: “In April, a two-day informal summit with President Xi helped us cement our understanding that strong and stable relations between our two nations are an important factor for global peace and progress. I firmly believe that Asia and the world will have a better future when India and China work together in trust and confidence, sensitive to each other's interests.” These words effectively crystallized the connection between Wuhan and an apparent softening of India's position on the Quad.

The following weekend, Modi attended the Shanghai Cooperation Organization (SCO) summit in Qingdao, China, for the first time as an official member of the group and met with Xi again on the sidelines. Modi and Xi agreed to find a project that they could work on collaboratively in Afghanistan and to engage Pakistan to reduce regional tensions.

But perhaps the most important development at the SCO summit was New Delhi signing onto the Qingdao Declaration, which noted that “economic globalisation is confronted with the expansion of unilateral protectionist policies.” This line has particular salience given the Trump administration's ongoing trade frictions with multiple countries, including both China and India. Recent reports have since speculated that New Delhi may find it convenient to use bilateral trade as a crutch and “insurance policy” against Washington, should it need to do so. If true, Beijing would probably insist on India first leaving the Quad to fully benefit from this arrangement.

Most recently, in early July, reports surfaced that New Delhi planned to brief China and Russia on its Indo-Pacific policy. India used the opportunity of the second maritime dialogue with Beijing to elaborate on its vision of the region, first laid out at the Shangri-La Dialogue by Modi. A key theme is that the Association for Southeast Asian Nations (ASEAN) should be central to the Indo-Pacific, implicitly meaning not the Quad or any single country.

Taken together, these developments are no doubt troubling for the future sustainability of Indian participation in the Quad. But New Delhi has equal—if not more persuasive—arguments to remain a member and an active one. Regardless of any agreements reached at Wuhan, the reality is that India and China still have serious misgivings about each other. New Delhi reaffirmed its rejection of Xi's signature Belt and Road Initiative and awkwardly broke annual consensus at the annual SCO summit over the issue. India believes that the initiative is targeting investment, trade, and infrastructure cooperation with small South Asian countries traditionally within India's geostrategic orbit—such as Nepal, Bangladesh, the Maldives, and Sri Lanka—and New Delhi has vigorously pushed back by shoring up ties with these nations.

India is aggressively seeking port access and joint development agreements with maritime states throughout the Indo-Pacific to deal with China's growing influence. The strategy envisions countering Beijing's establishment of a naval base at Djibouti and preventing additional access to new facilities. In the last year alone, New Delhi has been racing to forge agreements in diverse places including Duqm (Oman), Assumption Island (Seychelles), Chabahar (Iran), and Sabang (Indonesia). But eventual Indian Navy operations alone within this network will probably not be enough to ensure the entire Indo-Pacific remains stable and peaceful. Having the Quad members available to supplement and reinforce Indian operations at and via these ports could increase deterrence.

The ASEAN maritime countries—Modi's apparent barometer for tailoring Indian behavior in the Indo-Pacific—are becoming increasingly skeptical of and activist against China's military expansion in the South China Sea. For example, New Delhi's closest defense partner in the ASEAN, Vietnam, has been sounding the alarm for years and is modernizing and professionalizing its military for potential combat in the region.

India has supported Hanoi in this endeavor, recently hosting an unprecedented joint naval exercise in the South China Sea. In addition to working with New Delhi at the strategic port of Sabang, Indonesia has also recently agreed to boost defense and maritime security cooperation. And the surprise election in Malaysia appears to signal at the very least less tolerance of Beijing's growing naval presence in the region (to be fair, same goes for Washington's as well) and its Belt and Road practices. Thus, India's sustained membership in the Quad would certainly fit with the goal of balancing against China to deter it from further militarizing the Indo-Pacific.

Even if New Delhi one day officially exits the Quad, it is unlikely to alter its bilateral and multilateral cooperation with the Quad members. Indian defense relations with the United States, Japan, and even Australia—despite the Malabar decision—have never been better. Trilateral arrangements have also borne fruit as shown by the Malabar joint naval exercises among India, the United States, and Japan. Additionally, the India-Australia-U.S. trilateral security mechanism appears to be in good health, having met in December 2017.

But given all this, at the end of the day India could still very well wind up leaving the Quad to avoid antagonizing China. As demonstrated at the SCO summit, global trade frictions could leave New Delhi with little choice but to embrace further economic entanglement with Beijing in spite of the growing bilateral trade imbalance of $51 billion favoring China and India's suspicions of Belt and Road.

Furthermore, because Modi may face a tough re-election campaign, keeping Doklam under wraps until after 2019 to avoid possible defeat will be imperative. This likely puts an even greater priority on maintaining bilateral stability. More broadly, India's foreign policy from its inception has been famously nonaligned, suggesting that the Quad will never be a good fit. India could swing either way—and both decisions would be equally understandable.

This commentary originally appeared on Foreign Policy on July 23, 2018. Commentary gives RAND researchers a platform to convey insights based on their professional expertise and often on their peer-reviewed research and analysis.