Time to Make a Deal on Syria 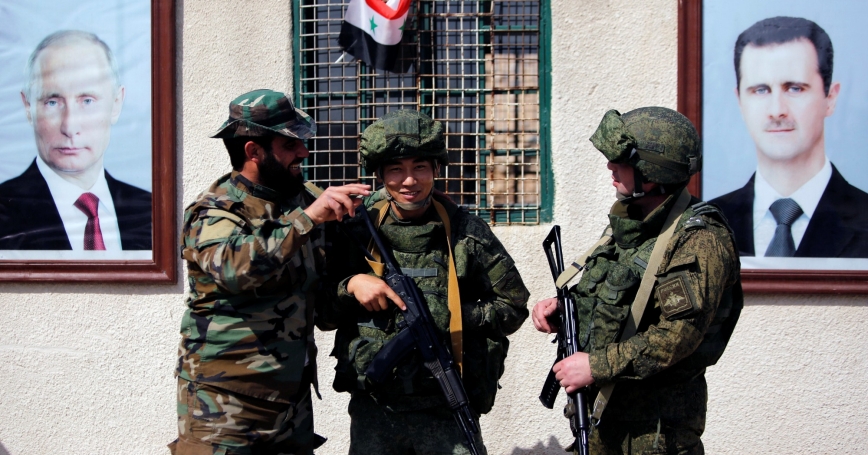 Syrian and Russian soldiers at a checkpoint near Wafideen camp in Damascus, Syria, March 2, 2018

by Samuel Charap and Jeffrey Martini

President Donald Trump is reportedly considering making a deal on Syria with Russia's Vladimir Putin during their July 16 summit in Helsinki. In principle, this would be a positive development. The Bashar al-Assad regime's ongoing assault on one of the few remaining areas controlled by the opposition underscores the urgent need for the United States to pursue a diplomatic solution if it is to preserve its interests in the conflict, namely maintaining the gains made against the Islamic State and constraining Iranian influence in the country.

Over the past four years, the United States has enjoyed a luxury in Syria that will soon disappear: The top U.S. priority (defeating the Islamic State in the eastern part of the country) was compatible with the Syrian regime's top priority (defeating insurgents in the western part of the country). In practical terms, this meant that Damascus acquiesced to U.S. operations and de facto control in the east while Washington — gradually under President Barack Obama and then quickly under Trump — gave up on the opposition in the west. However, this unwritten arrangement is now coming undone as both sides shift their objectives.

Many analysts assumed that the Assad regime only cared about “useful Syria,” a term that refers to the populated western spine that runs from Daraa in the south through Damascus, Homs, Hama, and north to Aleppo. Seven years into the conflict, it turns out that Assad and his allies actually care a lot about water, agriculture, electricity, oil, and control over borders — all of which are found in the country's east. The assault on the southwest over the past few weeks is a preview of what can be expected east of the Euphrates River, where the United States supports the Syrian Democratic Forces as the authority on the ground.

Cutting a deal with Syria's Russian patrons might prompt Russia to dissuade Assad from seeking to retake the entire country by force.

The Assad regime, with the support of Iranian-aligned groups and Russian mercenaries, has already tried to establish beachheads on the eastern side of the Euphrates. It is now only a matter of time before it challenges U.S. allies in the east even more aggressively. Cutting a deal with Syria's Russian patrons while there still is a deal to be made might prompt Russia to dissuade Assad from seeking to retake the entire country by force.

Just as the Syrian government's goals are evolving, so too are Washington's. Now that the Islamic State has largely been defeated, the Trump administration has set its sights on “kicking Iran out of Syria.” This rhetoric signals the ascent of the more hawkish anti-Iran camp within the administration, which is split between those who favor a reduction in U.S. commitments overseas and those who favor the application of military force against regional adversaries. What kicking Iran out means in practice is unclear, but without maintaining a military presence in Syria indefinitely, which Trump apparently does not want to do, this objective will have to be realized at the negotiating table.

Although U.S. leverage is much diminished by the Assad regime's recent gains, there are still opportunities for Washington and Russia to achieve a settlement that preserves some U.S. interests. The Kremlin does not want to continue its air campaign in Syria indefinitely in support of an outcome that mainly serves the interests of Assad and Iran. Russia could therefore be expected to support a political settlement that meets its bottom line: no regime change in Damascus and no permanent U.S. military presence in Syria. Many in Moscow would prefer this outcome to helping the Syrian military and the Iranians brutally recapture all rebel-held areas. Indeed, if Russia enabled Assad to reconquer the entire country, Moscow would actually lose some leverage with the Assad regime by making its continued support less critical.

For the Trump administration, such a settlement would hardly be a major concession. And such a deal could also deliver on Washington's bottom line — preventing the re-emergence of the Islamic State and denying Iran a free hand to expand its influence in the Middle East. Russia is also wary of allowing Iran to dominate Syria and has no interest in allowing the Islamic State to flourish. And Washington's closest front-line partners, Israel and Jordan, have similar objectives. They are deeply opposed to any Iranian-aligned forces operating in their vicinity. This is fertile ground for a settlement, and it is good that the Trump administration is pursuing it. But if it wants to succeed, the administration should condition any future withdrawal from eastern Syria on Russian commitments to constrain Iranian influence in Syria.

It is counterproductive to pursue this settlement while threatening a U.S. military withdrawal from eastern Syria.

It is counterproductive to pursue this settlement while threatening a U.S. military withdrawal from the eastern part of the country, where the United States has some bases and has enlisted Kurdish partners to help fight the Islamic State. An agreement between Trump and Putin could create the conditions for withdrawal, but giving leverage away in advance is probably not a winning strategy.

The Trump administration rightly seeks to limit Iranian influence in Syria, but it would do well to recognize that the United States cannot force a complete Iranian withdrawal. As for Israel, it has the capability to wear down Iranian forces in Syria through airstrikes. But it does not possess the absolute air supremacy or the intelligence, surveillance, and reconnaissance capabilities to track and target all Iranian-affiliated units operating in the country.

Russia could not oust Iran either, even if it were to agree to broker an Iranian withdrawal, which is unlikely. Tehran and Damascus have been allies since the Iran-Iraq War in the 1980s, and Iranian manpower has helped turn the tide of the Syria conflict. Removing the threat of Iran opening a new front on the Israeli border and preventing Iran from establishing bases in Syria would be a win for the United States. Expelling Iran entirely from Syria is a fantasy.

Despite these challenges, there is every reason to test the proposition that Russia would be open to a deal that ends the bloodshed, preserves some autonomy for eastern Syria, prevents the country from falling fully under Iranian control, and allows for continued counterterrorism efforts against the Islamic State. If Trump can convince Putin to commit to such an arrangement at their summit, it would be a major accomplishment.

Samuel Charap is a senior political scientist and Jeffrey Martini is a senior Middle East researcher at the nonprofit, nonpartisan RAND Corporation.

This commentary originally appeared on Foreign Policy on July 10, 2018. Commentary gives RAND researchers a platform to convey insights based on their professional expertise and often on their peer-reviewed research and analysis.