Bringing Back Sanctions Will Hurt U.S. Allies and Iran, but Will It Help the U.S.? 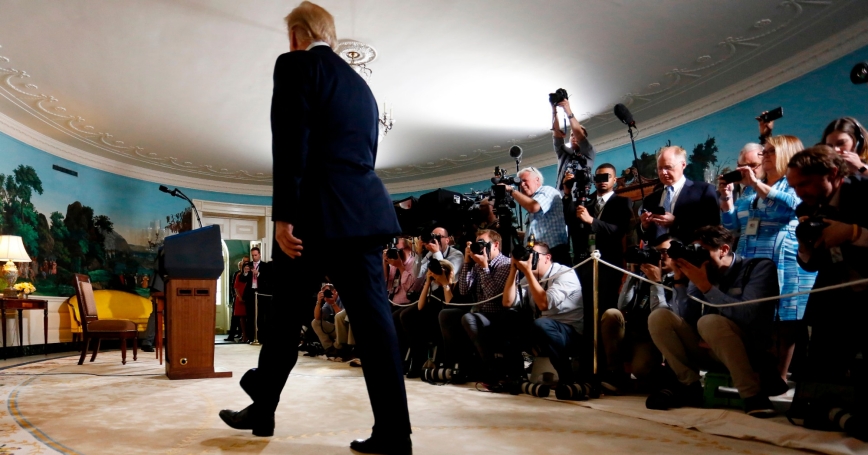 U.S. President Trump arrives to announce his decision to withdraw from the JCPOA Iran nuclear agreement in the Diplomatic Room of the White House, May 8, 2018

After decertifying the Iran nuclear agreement last October and announcing the withdrawal of the United States from the agreement in May, President Trump's snap back of sanctions this week comes as no surprise.

More will come in early November, when the United States will try to force the complete halt to all Iranian oil exports. This is, to be clear, a campaign of maximum pressure to bring the nuclear agreement to collapse.

This is no longer a drill or some Trump-era theater in which the president tweets and few take his threats seriously. The United States has in fact left an agreement that most of the world, and all of its other parties and the International Atomic Energy Agency, believe is working.

Now it's the real deal, with material consequences on global oil markets, international trade and of course the Iranian people. There is no question the result will be particularly painful for Europe and Iran.

But is there any way it could be good for the United States and its interest in keeping the Iranian challenge contained? Unfortunately, the answer is almost certainly no.

Let's start with the impact on Europe. The Iran nuclear agreement was embraced across Europe as a major international achievement, restraining the Iranian nuclear program for at least 10 years with a robust inspection regime that, while not perfect, was far better than the minimum constraints that existed before the deal.

The agreement did not address other areas of concern about Iran that Europeans share with the United States, particularly ballistic missiles that can reach much of Europe and support for extremist groups fighting wars throughout the region.

They have vowed to protect European companies' ability to continue trade with Iran as promised in the deal, including reinstating statutes that aim to challenge U.S. enforcement of secondary sanctions — measures not seen from Europe since the transatlantic dispute over Cuba in the 1990s.

While few doubt European governments' intent to preserve investment in Iran, their ability to do so in practice is questionable. European companies do not want to take the risk of losing the American market, and the uncertainty created from the U.S. withdrawal has already led major companies like France's Total to leave Iran.

With the reality of the reimposition of U.S. sanctions, the European Investment Bank head said it can't play a role in Iran, raising doubts about the ability of European governments to protect their companies and maintain investment in Iran given the dependence on the U.S. dollar.

The Trump administration rejected requests by the major European powers to grant exemptions last month and continues to signal a zero-tolerance policy for business with Iran.

Unlike in 2012–2015, when the United States was able to attract multilateral buy-in from Europe and other major powers for sanctions to help bring Iran to the negotiating table, sanctions compliance this time around would be the result of U.S. coercion.

The sanctions may “work” in keeping European (and Japanese and South Korean) business out of Iran, but at what cost? New friction is inevitable in already frayed relations with longstanding allies.

When it comes to the impact on Iran, devastating consequences can be expected. While nearly half of Iran's oil exports go to China and India, Iran still risks losing over a third of its exports to European and Asian markets when the second round of sanctions kick in.

With the value of Iran's currency cut in half since last spring, rapid inflation and high unemployment, it's hard to argue that such a disruption won't hit the Iranian economy hard and destabilize world oil markets — even with a likely Saudi increase in oil exports to compensate.

But while it's clear the sanctions tool will work in creating pain for Iran, will it lead to any significant changes in their regional policies or make them more willing to go back to the negotiating table and settle for less than what they had before? Not likely.

First of all, while Iran will struggle economically, China, Iran's largest trading partner, says it will not comply with U.S. sanctions. India and Turkey (which gets 49 percent of its imports from Iran) are also signaling they will only comply with U.N.-mandated sanctions, not unilateral U.S. sanctions. Iran may be able to muddle through.

Such blunt sanctions are likely to hurt average Iranians more than Iran's corrupt leaders, who in the past have found ways to benefit from such economic coercion.

What will be the incentive of Iran's leaders to go back to the negotiating table? What could the United States possibly give Iran that would come at an acceptable cost to its current leaders?

This raises the question of whether the intent of this extreme pressure is about destabilizing Iran in the hopes that the sanctions will spur protests. There's no question that the protests in Iran since last December reveal the vulnerability of Iran's leadership to widespread discontent over the poor management of the country.

But will sanctions that hurt ordinary people bolster the existing protests in ways that could threaten the regime? Or, will Iranians resent the United States for imposing the suffering they are facing as much as they resent their own leaders, leaders who have demonstrated an ability to brutally and effectively suppress domestic opposition when it threatens their own survival?

So yes, going back to the sanctions game plan may well force Europe out of Iran and hurt Iran and its people. But then what? If leaving the Iran deal and attempting a maximum pressure plan does not lead Iran to change its behavior or the regime to collapse, what's next?

The Trump administration may find that it's a lot easier to break a deal than to replace it with something better.

Dalia Dassa Kaye is director of the Center for Middle East Public Policy and senior political scientist at the nonprofit, nonpartisan RAND Corporation.

This commentary originally appeared on The Hill on August 7, 2018. Commentary gives RAND researchers a platform to convey insights based on their professional expertise and often on their peer-reviewed research and analysis.