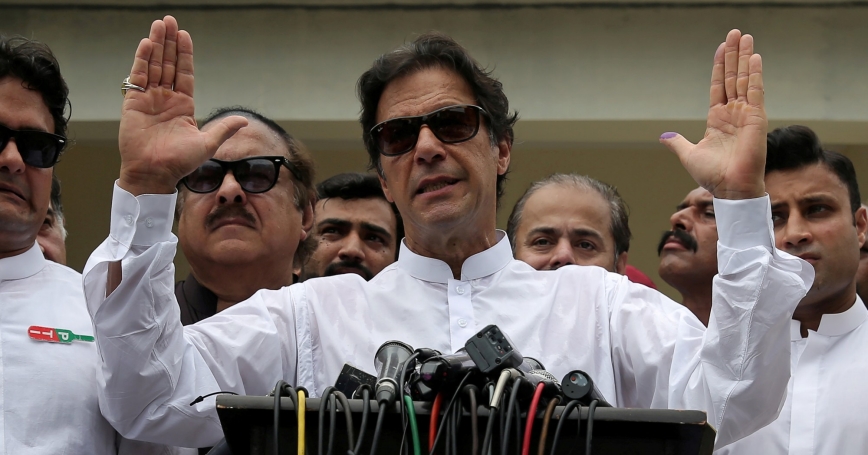 Imran Khan, chairman of Pakistan Tehreek-e-Insaf, speaks to members of media after voting in the general election in Islamabad, Pakistan, July 25, 2018

by Rafiq Dossani and Jalal Awan

In the midst of scorching summer heat, multiple suicide bombings and dramatic arrests of Pakistan's ex-premier Nawaz Sharif and his daughter on corruption charges, the country witnessed a historic general election in late July. A relatively new player in the political arena, the Pakistan Tehreek-e-Insaf (PTI) party—or “Movement for Justice”—led by Pakistani cricket legend Imran Khan came out victorious overall, tumbling entrenched political dynasties in strongholds across north and south and in the wealthiest and most populous province, Punjab.

In the charged political environment leading up to the election, opposition parties voiced concerns about the fairness of the electoral process, hinting at the “invisible hand” of the country's strong military establishment secretly supporting Khan. These concerns were not ill-founded. An independent-observer mission of the EU overseeing the process noted a “lack of equality of opportunity” for all political parties in the lead-up to the election. Nevertheless, neutral observers including the EU mission observed no evidence of rigging on election day. Whether the establishment influenced the pre-election process in a significant manner will likely remain uncertain. However, the overwhelming feeling in the country is one of relief and hope for a fresh start with a clean slate.

Khan rode the anti-corruption populist wave for more than two decades. His first breakthrough came in the 2013 election when his party won a majority in Khyber-Pakhtunkhwa (KP), considered to be one of the country's difficult provinces to govern, and which borders Afghanistan. Five years later, his party again claimed victory in KP, largely by delivering on two promises: running a clean government and transforming hospitals and schools. This was made possible because technocrats and educated Pakistanis joined Khan's call for “justice across the board” and transitioned from passive political spectators to change-seeking lawmakers. Altruism, a concept that seems to be alien to most political leaders in the subcontinent, also reigned supreme in KP during Imran Khan's governing.

Perhaps the victory was due to the combination of the performance of Khan's party in KP and its appeal for a corruption-free, “new Pakistan”—a cornerstone of Khan's campaigns—that rallied an overwhelming number of women, youth and expats around him. Widespread media awareness acted as a catalyst. Women, who comprise 44 percent of the electorate, historically self-exclude from the election process due to societal and cultural constraints on mobility and political activism. But they turned out to vote in unprecedented numbers, many for the first time.

What might America's policy toward Pakistan look like? On terrorism, Khan espouses an overall pacifist outlook, vehemently opposing U.S. drone strikes and calling for dialogue with extremist elements as the only way to achieve peace. Yet his party's governance in KP shows he is likely to be flexible. Pakistan's all-powerful military establishment has taken a hard line on terrorism in recent months, and Khan's campaign rhetoric will probably self-calibrate once the work of statecraft begins.…

This commentary originally appeared on The National Interest on October 16, 2018. Commentary gives RAND researchers a platform to convey insights based on their professional expertise and often on their peer-reviewed research and analysis.