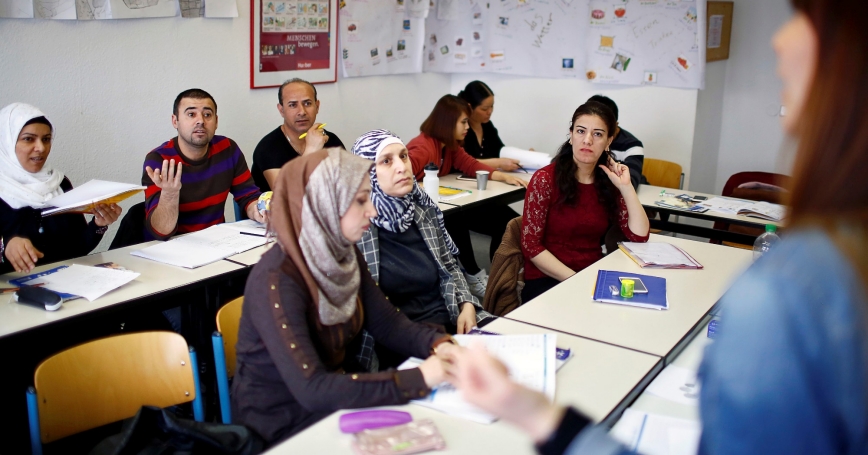 Migrants attend a lesson at the “institute for intercultural communication” in Berlin, Germany, April 13, 2016

Since 2009, 3.4 million irregular migrants—asylum seekers or economic migrants entering without a visa or confirmed asylum status—entered the European Union. They arrived on flimsy boats by sea or crossed land borders. As numbers peaked in 2015, some EU leaders and observers worried that the migration crisis was an existential threat to the EU itself. Migration sparked bitter debates about social integration, culture, values, security, and national identity. Member states were not able to agree on important steps like a common asylum policy to distribute refugees among countries, calling into question the effectiveness of EU institutions and leadership. Far right parties gained political ground in many countries and moved platforms of more traditional parties to the right. Moreover, skepticism about internal EU migration fueled the United Kingdom's vote to exit the EU, commonly called the Brexit.

Since then, the EU has taken several steps to address irregular migration. This led to greater EU capability to manage migration through developing institutions, policies, and foreign policy approaches. EU actions also led to significant drops in numbers of new irregular migrants, from 1.8 million people in 2015, to 206,000 in 2017 and 104,000 in 2018 through September. However, these steps have also not fully addressed EU migration challenges in the long run, such as opening the EU up to criticism about complicity in human rights abuses along migration routes, poor integration of new migrants into European society and labor markets, and remaining migratory pressures from Africa and the Middle East.

Here are five strategies that the EU has adopted to address irregular migration, some signals about the effects of these strategies, and the remaining issues that the EU could now focus on addressing.

An initial response to the migration crisis was an EU effort to update its common asylum policy to distribute asylum seekers across EU member states and coordinate reception approaches. Even though Brussels had been working on this issue for over a decade, the EU repeatedly failed to agree on a common asylum policy. Meanwhile, a large number of irregular migrants stressed the ability of even the most generous countries to live up to their obligations regarding asylum rights, and other countries resented accepting additional migrants.

Shelly Culbertson is a senior policy researcher and Charles Ries is vice president, International, at the nonprofit, nonpartisan RAND Corporation.

This commentary originally appeared on The National Interest on December 1, 2018. Commentary gives RAND researchers a platform to convey insights based on their professional expertise and often on their peer-reviewed research and analysis.