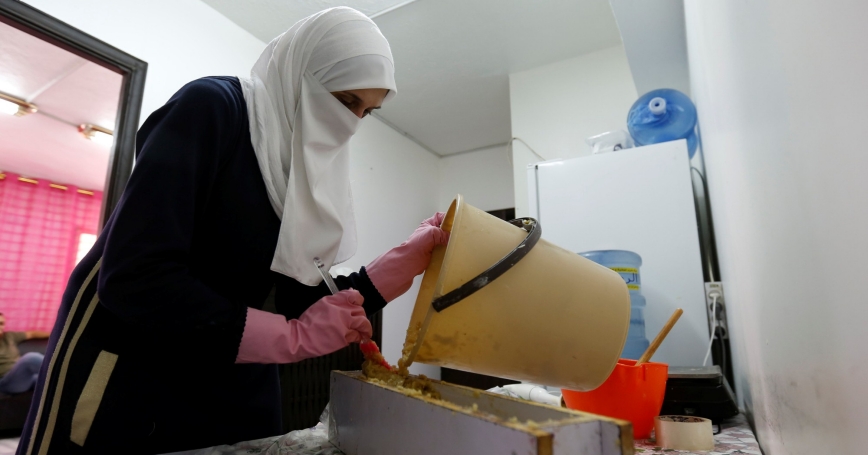 For Syrian women living as refugees in a Middle Eastern host country, the pressing need to work has had an unexpected upside for many of them—a feeling of empowerment and liberation because they can contribute to the well-being of their families in a meaningful way.

Before the Syrian civil war broke out in 2011, around 13 percent of working-age women in Syria were members of the labor force, a rate that was among the lowest in the world. But as refugees, the share of Syrian women who report being in the labor force is significantly higher than it was in their home country, according to our recent RAND Corporation study of employment opportunities for Syrian refugees.

The labor force participation rate generally measures the share of working-age people who are working or are willing to work. In surveying about 1,800 households across three host countries, we found more than a quarter of Syrian refugee women in Turkey and Lebanon and more than half of those in Jordan reported being part of the labor force.

As refugees, the share of Syrian women who report being in the labor force is significantly higher than it was in their home country.

Some Syrian women—and men—in our focus groups viewed opportunities for women to work as newly empowering and as being more socially accepted, necessary and respectable. A Syrian refugee woman in Beirut echoed that sentiment: "Women are capable of earning their own money and being financially independent [in Lebanon]. In Syria, we didn't have this privilege of being exposed to the world. I don't have to wait for my husband to give me money to buy food and other things I need. Women can depend on themselves. Women feel empowered after coming to Lebanon, having to work, and being independent."

While more Syrian women express willingness to work, their workplace challenges as refugees include long hours, poor work conditions and low pay. About half reported a lack of reliable and safe transportation to work, and about half also reported that women fear sexual harassment in the workplace.

The absence of opportunities for both Syrian refugee women and men can be partially traced to the poor-performing economies of the three countries in our study. All three countries have been affected by the conflict in Syria because of the lack of security and the closing of trade routes. Syrian women also bear the bulk of child-care responsibilities, limiting their ability to participate in the labor force.

However, there are several ways that the conditions of Syrian women refugees working in the host countries could be improved. Humanitarian programs could focus more on child care to free up time for women to work and earn a living, and governments in the region could improve enforcement of existing labor laws regarding workplace safety to improve safety for all workers, but particularly women. Lack of enforcement of basic workplace safety conditions leaves women vulnerable to sexual harassment.

Employers could work with local transportation providers to develop safe, female-only transportation options to help them reach their places of employment. Partnering with large employers—particularly those that employ many female workers, such as large textile factories in Turkey and Jordan—could be cost-effective for employers and benefit both host country nationals and Syrian refugees.

Improving the chances of safe and dignified work opportunities for Syrian women in [Jordan, Lebanon, and Turkey] could yield broad positive social benefits for refugees and their host communities.

Finally, donors could identify opportunities for self-employment of Syrian women by promoting small business programs likely to provide a steady source of income. Many Syrian women in Turkey, Jordan and Lebanon are engaging in self-employment activities that involve preparation of baked goods and other ready-made meals, handicrafts and other items. Providing micro-financing, financial advising and marketing services may help these women reach more consumers and new markets that could allow them to earn a modest livelihood.

Improving the chances of safe and dignified work opportunities for Syrian women in the trio of host countries could yield broad positive social benefits for refugees and their host communities. It could increase Syrian refugee investment in their families' health and education, mitigate the factors that drive desperate families to allow early marriage and exploitation of vulnerable women and children, reduce refugee reliance on aid support—and ultimately enhance and maintain each woman's physical, mental and emotional well-being.

Louay Constant is a senior policy researcher, Shanthi Nataraj is a senior economist and Fadia Afashe is a production editor at the nonprofit, nonpartisan RAND Corporation.