Opioids and a Crisis of Unintended Consequences 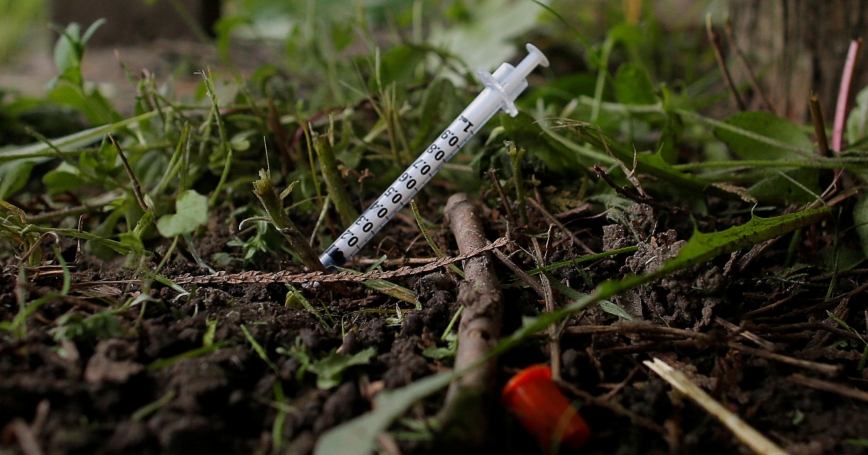 A used needle sits on the ground in a park where there were raids to break up heroin and fentanyl drug rings in Lawrence, Massachusetts, May 30, 2017

It is well-known that misuse of the opioid OxyContin has ruined millions of lives, especially in rural America and Rust Belt states. Far less known are the pernicious side effects of the effort to make the drug harder to abuse.

The makers of OxyContin, one of the most widely-abused prescription painkillers, changed the drug's formula in 2010 as the opioid crisis spun out of control. The move by Purdue Pharma certainly made sense: In its original form, OxyContin could be crushed to deliver highly concentrated amounts of oxycodone that could be ingested, inhaled or injected. The new version made it difficult to crush or dissolve the pill, cutting off some of the most dangerous methods of abuse.

But the reconstitution of OxyContin—and the role it has played in the evolution of the opioid crisis—offers a sobering example of a reasonable policy that backfired and made other public health problems worse.

Before 2010, the opioid crisis was driven primarily by misuse of prescription opioids, such as OxyContin and Vicodin. Heroin overdose rates were relatively low and stable during a period when opioid overdoses were soaring.

But after the reconstituted form of OxyContin went on the market in 2010, that balance changed. Prescription opioid death rates began to slow, but overdoses involving heroin more than quintupled. They rose more sharply in Massachusetts, Montana, Wisconsin and other states with high rates of OxyContin abuse before reformulation, as recent research completed with colleagues at the University of Pennsylvania and the nonprofit RAND Corporation shows. Our study suggests that many people simply turned to the black market for heroin.

Heroin deaths linked to OxyContin's reformulation surged. But the increased heroin use resonated in another significant and far-reaching way.

Heroin is typically injected, and drug injection rates are linked to increased transmission of infectious diseases, such as hepatitis C. Since 2010, reported rates of acute hepatitis C infections have tripled. And, like the pattern in heroin deaths, hepatitis C infections grew faster in states that had higher rates of OxyContin misuse before it was reformulated.

Hepatitis C infections grew faster in states that had higher rates of OxyContin misuse before it was reformulated.

My colleagues and I examined the rate of new hepatitis C infections in each state, using data collected by the Centers for Disease Control and Prevention between 2004 and 2015. We found that the states with the highest rates of OxyContin misuse before it was reformulated experienced a 222 percent increase in the hepatitis C infection rate. The states with lower misuse rates had a comparatively modest 75 percent increase.

The gap between the high- and low-abuse states widened rapidly starting in 2011—the first full year after OxyContin was reformulated. The divide continued to grow through 2013.

The spike in hepatitis C cases is cause for high alarm. Hepatitis C is responsible for more deaths in this country than any other infectious disease. In 2015, it claimed nearly 20,000 lives—more than the total number of fatalities from the other 60 infectious diseases reported to the CDC. Authorities estimate that 3.5 million U.S. residents have chronic hepatitis C.

The spread of hepatitis C is a slowly ticking bomb. Many of the health problems associated with the virus, such as liver failure and cirrhosis, arise 10 to 40 years after the initial infection. The estimated average lifetime medical costs to treat it exceed $200,000 per patient. Multiplying that cost by the number of infected persons suggests an enormous burden on the health care system in the future.

The dramatic upswing in hepatitis C cases is evidence of a pivotal turn in the opioid epidemic, one that could lead to rising rates of other infectious diseases tied to injection drug use, such as HIV.

Making addictive drugs more difficult to abuse may have beneficial effects that have yet to be quantified. For example, the change in OxyContin may have discouraged some individuals from misusing opioids in the first place.

One approach to the dilemma could attempt to provide an accessible alternative to switching to black markets by coupling policies that restrict access to abusable opioids with broader access to effective treatment.

As policymakers consider additional approaches to curb opioid abuse, they should be mindful that any strategy may have unintended consequences—and be prepared to respond.

David Powell is a senior economist at the nonprofit, nonpartisan RAND Corporation and Research Fellow at the RAND Opioid Policy Tools and Information Center.

This commentary originally appeared on The Hill on February 20, 2019. Commentary gives RAND researchers a platform to convey insights based on their professional expertise and often on their peer-reviewed research and analysis.