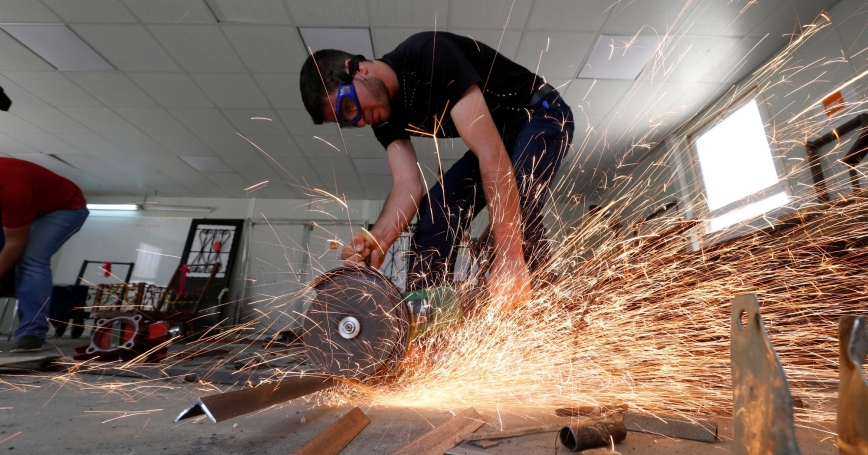 by Shelly Culbertson and Krishna B. Kumar

This past December, the United Nations General Assembly voted to ratify the U.N. Global Compact on Refugees (PDF), the first comprehensive agreement on managing refugee situations since the 1951 Refugee Convention. The document marks a major conceptual shift among the global community by recognizing that displacement is usually not temporary. In fact, according to the U.N., it can last around two decades (PDF) on average. That's why, the compact says, the world needs to focus on supporting self-reliance for the world's nearly 69 million displaced people, the importance of jobs in facilitating economic empowerment and well-being, and easing the pressure on host countries.

About 13 million of the world's displaced are Syrians. To understand their potential opportunities and employers in Middle Eastern labor markets, specifically Lebanon, Jordan, and Turkey, we at the RAND Corporation recently administered a unique and detailed survey of 1,800 Syrian refugee households and 450 employers, conducted 36 focus groups with Syrian and host country workers, interviewed 60 government and humanitarian leaders, and spoke at length with a dozen businesses.

So far, the civil war in Syria has displaced an astonishing 60 percent of Syria's population. Half of those people are living outside the country. Turkey hosts 3.6 million registered Syrian refugees, Lebanon 1 million, and Jordan another 660,000. The remainder live mainly in Europe, Iraq, and Egypt. With the war nearing the end of its eighth year—and the imminent return of most Syrian refugees to their homes unlikely—the Syrians need more than humanitarian aid. As we surveyed Syrian refugees, time and again, they recounted the same wants and needs. They craved the self-reliance, dignity, and hope that would come from holding a job. In turn, the overburdened host countries of the Middle East may need to see economic benefits from continuing to host the refugees.

Many Syrians are already working and finding ways to get by in their host countries, according to our research. In Turkey, Lebanon, and Jordan, the share of Syrian refugee men who are working or willing to work hovers around 90 percent. In our sample, of those willing to work, the share of Syrian men actually working ranges between 58 and 88 percent. Far fewer Syrian women refugees work, but many more have jobs than before the war. In our focus groups, some Syrian women said earning money for their families had given them newfound empowerment.

Despite legal constraints that limit formal Syrian work, businesses are hiring them. Turkey and Jordan allow Syrians to obtain permits so they can work legally, and Syrians are also permitted to work in a few sectors in Lebanon. Businesses in our survey in Jordan and Lebanon said they anticipate growth (particularly in manufacturing) and plan to continue to hire Syrians. Turkey's large economy has already absorbed many new workers, our survey showed, although not all Syrians who wanted jobs could find them.

Despite local resentment about the presence of the large numbers of Syrians—and occasional reports of tensions between refugees and locals—these countries have remained largely stable. In our surveys, Syrians generally reported feeling respected. They also report that they do not face discrimination at work. Host country workers and businesses, meanwhile, viewed the Syrians as hard workers and often expressed compassion for them.

At the same time, however, there are still significant challenges to sustainable employment for Syrian refugees in Lebanon, Jordan, and Turkey.

The Syrian refugees we surveyed craved the self-reliance, dignity, and hope that would come from holding a job.

The trio of economies was slowing even before the refugee influx. Unemployment rates among host country workers are high, and the Syrians we surveyed also reported an absence of job openings. Even before the arrival of the refugees, each of the host countries was having a hard time generating investment and business growth in the aftermath of the Great Recession of 2008 and the cutting off of trade routes from wars in Syria and Iraq.

Further, well-intentioned national frameworks that allow Syrians to work legally are not functioning as planned. Instead, most Syrians are working without permits (and without legal protections) because of the cost of the permits, permit requirements that make businesses reluctant to hire, and the difficulty of navigating each country's bureaucracy. Syrians and businesses surveyed in all three countries cited difficulty getting a work permit or maintaining residency permit as an obstacle to employment. And working without the legal protections that come with permits has left the Syrians vulnerable to poor working conditions. Another complication is that each host country limits the sectors in which Syrians are allowed to work legally.

In turn, according to our survey, most Syrian refugees in Jordan, Lebanon, and Turkey are working in low-wage, low-skill jobs. This may be because they are less educated overall than host country workers. Syrian refugees in our surveys had lower educational levels than Syrians in Syria before the war, perhaps because many educated Syrians had already left for Europe and because a generation of young Syrians have missed out on educational opportunities. In addition, few refugees surveyed held the same type of job as they had in Syria. Many said their job hunting was hampered by their not having proof of their qualifications or lacking legal rights to work in their fields. Many Syrians said they were frustrated that they were working below their skill levels.

The situation is complicated by geographic mismatches between Syrian refugees and jobs. The refugees are concentrated in capital cities, which are overburdened due to fast population growth, and in rural areas near the Syrian border, where unemployment is high even among the locals. In contrast, many job openings are in secondary cities or special industrial zones, but few options exist to match workers and employers.

Job-matching assistance or training relevant to the local labor markets could go a long way toward easing these employment challenges. But few such programs exist, and the vocational training programs for Syrians funded by the international humanitarian community do not appear to meet market needs. In Turkey, Syrians and businesses reported Turkish language training as a great need, but only around 10 percent of Syrian survey respondents reported receiving it.

Host governments, international development agencies, and donor countries like the United States could take several steps to improve Syrian refugee employment—and therefore increase self-reliance of Syrian refugees and ease pressures on host communities. In addition, maintaining and developing skills through jobs will be important if the time comes that Syria is stable enough for its refugees to return.

One strategy would be to provide job matching for both refugees and host country workers. Workers could be matched with jobs in specific zones or regions, and refugees could be incentivized to move to where the jobs are. Germany and Sweden have instituted such programs, which has helped meet employer needs in secondary cities, allowed refugees to find better jobs, and reduced strains on capital cities.

Another strategy would be to provide job-specific training for refugees and host country workers. This might include offering language training for Syrian workers in Turkey and developing approaches for credentialing Syrians so that they have proof of their skills and qualifications. Another approach could be to make it easier for refugees to secure work permits by allowing any person with registered refugee or temporary protection status to automatically have the legal right to get a job or by decreasing the requirements and fees. Boosting general economic health, particularly in Jordan and Lebanon, through large-scale foreign investment in aging and overburdened infrastructure also would likely create many construction-related jobs. And taking steps to improve the business environment could create opportunities for all.

Shelly Culbertson is a senior policy researcher focusing on refugees at the nonprofit, nonpartisan RAND Corporation. She is the author of The Fires of Spring: A Post-Arab Spring Journey Through the Turbulent New Middle East (St. Martins, 2016). Krishna Kumar is a senior economist, the director of international research at RAND, and the director of the Pardee Initiative on Global Human Progress at the Pardee RAND Graduate School.

This commentary originally appeared on Foreign Policy on March 8, 2019. Commentary gives RAND researchers a platform to convey insights based on their professional expertise and often on their peer-reviewed research and analysis.