Trump's Latest Move on Afghanistan Is a Repeat of Obama's 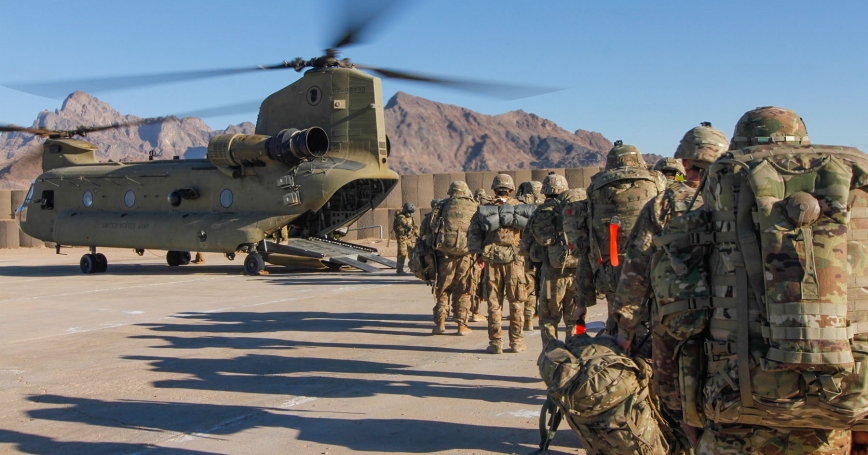 Soldiers load onto a helicopter to head out and execute missions across Afghanistan, January 15, 2019

American officials are reportedly consulting allies on a plan to cut American troop strength in Afghanistan by half in the near term (from around 14,000 to 7,000) and to withdraw them entirely within three years.

This is nearly identical to what President Obama announced five years ago. In May 2014, he decided to cut the 34,000-soldier American force in Afghanistan by 70 percent, to under 10,000, before reducing that number to 5,500 within a year and then withdrawing U.S. troops entirely by the end of 2016.

One week after Obama's announcement, the U.S.-trained Iraqi Army collapsed. The Islamic State had burst out of Syria and marched to the gates of Baghdad, where they were stopped and eventually pushed back by the Iraqis, only with significant American and Iranian assistance.

Obama's 2011 withdrawal from Iraq suddenly looked like a bet gone bad, and in the end, he chose not to run a similar risk in Afghanistan.

President Trump initially increased the American force in Afghanistan to 14,000. Now he intends to go back to the level he inherited from Obama and then to zero by 2022. This timetable is reportedly intended to support the peace talks that Trump's special envoy, Zalmay Khalilzad, is trying to jump-start.

How likely is it that this withdrawal schedule will be kept this time around? To the extent it depends on peace in Afghanistan, not very. So far, the Taliban have only been willing to talk about arrangements for American withdrawal, not about peace with its Afghan opponents.

How likely is it that Trump's withdrawal schedule will be kept? To the extent it depends on Afghan peace, not very.

Assuming this obstacle can be overcome, those Afghan-to-Afghan negotiations will be difficult and time-consuming. So too will be the implementation of any agreement that might result. This process is not likely to be completed within three years.

A more proximate possibility is that peace talks collapse or drag on unproductively, in which case it seems quite possible that President Trump would accelerate the full withdrawal. Other NATO troops would also likely leave, as would many Western civilians.

Financial assistance would contract, the Kabul government could begin to lose authority, and the country would likely descend into a much more violent multi-sided civil war as it did following the Russian withdrawal 30 years ago.

Of course, Obama did not condition his 2014 decision on peace. Whoever is president in 2022 might not either. In the absence of peace, however, that president will face the same choice as Obama and Trump, not a choice between winning and losing, but rather the choice between losing and not losing.

In the end, Obama chose not to lose. So far, Trump has chosen the same. As time goes on and the American public's patience grows shorter, that choice becomes more difficult. So far, however, each president has chosen to pass that decision on to his successor.

This commentary originally appeared on The Hill on March 8, 2019. Commentary gives RAND researchers a platform to convey insights based on their professional expertise and often on their peer-reviewed research and analysis.