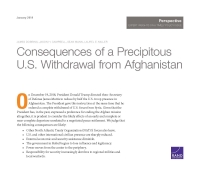 Consequences of a Precipitous U.S. Withdrawal from Afghanistan

In December 2018, President Donald Trump directed the Secretary of Defense to reduce the U.S. troop presence in Afghanistan by half. In this paper, the authors consider the likely effects of an early and complete or near-complete departure unrelated to a negotiated peace settlement. Among the consequences described are that the government in Kabul will begin to lose influence and legitimacy; the Taliban will lose interest in negotiating peace with the United States; and extremist groups will gain additional scope to organize, recruit, and initiate terrorist attacks. Winning in Afghanistan may not be an available option, but losing certainly is, and a precipitous departure, no matter how rationalized, would mean choosing to lose.

This project is a RAND Venture. Funding was provided by gifts from RAND supporters and income from operations. The research was conducted by the International Security and Defense Policy Center within the RAND National Security Research Division of the RAND Corporation.