The Syrian Civil War Is Coming to an End 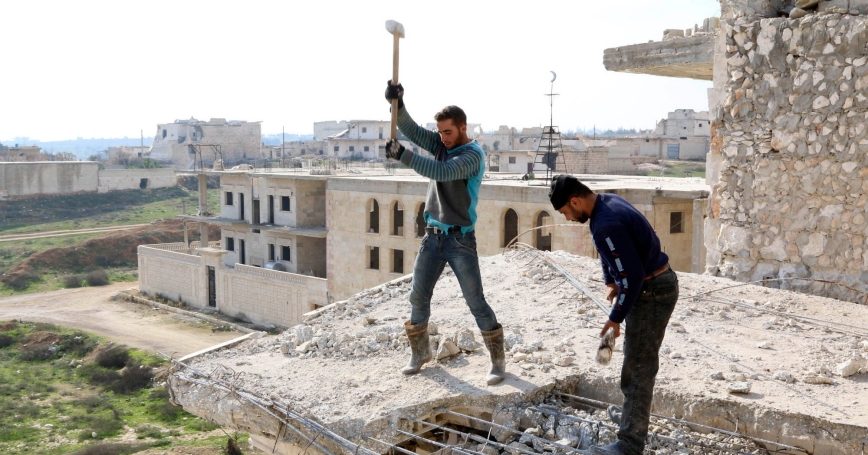 In late March, after a four-year, American-backed operation, coalition forces finally drove the Islamic State militant group (ISIS) from its final patch of territory in Syria.

The bigger challenge, however, will be ending the ongoing civil war and rebuilding Syria to bring home millions of refugees and internally displaced people. This means creating a state that can provide safety, security, and opportunity that forestalls further rebellion and devastation.

It's a daunting task, unlikely to happen anytime soon. The nature of Syria's government and the likely shape of any war accords portend an empty peace, if not a frozen conflict, and years of further suffering, potentially fomenting further conflict in the region and providing a continued haven for terrorists.

The cost of the Syrian civil war has been immense. Almost half a million people have been killed, half the population has been displaced, and the cumulative loss to the gross domestic product from 2011 through the end of 2016 has been estimated by the World Bank to total $226 billion. As yet, there have been no definitive estimates of the cost of reconstruction, although the Syrian government wishfully has mentioned $400 billion.

But as long as Bashar al-Assad remains in power, nothing close to that will come into the country. Instead, reconstruction will be piecemeal. The government will likely use its revenues to support projects by cronies in favored areas. People throughout Syria may use remittances and any income they have to rebuild houses. Russia and Iran will restore selected assets—oil and gas infrastructure, for example—and engage in some rebuilding when they can get funding and perhaps an ownership interest. But future sanctions may stall even these paltry efforts.

As long as Bashar al-Assad remains in power, reconstruction in Syria will be piecemeal.

In the right circumstances, Syria would benefit from multilateral assistance, bilateral assistance, and private-sector participation from the wealthy Western countries. Indeed, the Syrian and Russian governments have made clear that they would like the United States and the European Union to contribute substantial amounts.

However, the United States, Germany, and France have all explicitly said no or avoided saying yes. And the Americans and Europeans are so far committed to the unanimously approved United Nations Security Council Resolution 2254 (PDF), which calls for “credible, inclusive and nonsectarian governance … free and fair elections … to the highest international standards of transparency and accountability,” none of which are likely under the Assad government.

Notably, without the United States and EU, there is likely to be no large-scale participation by the World Bank or other multilateral institutions. And neither Russia nor Iran have the resources to fund massive reconstruction.

With its Belt and Road efforts to connect the Eurasian landmass, Africa, and other parts of the world, China would seem to be a candidate for providing reconstruction funding. But Beijing tends to be cautious with investment in war zones, and its funding comes largely in the form of loans for infrastructure construction projects, often carried out by Chinese companies, rather than grants or investment. (Information from Pakistan and Kenya, two sites of Chinese-funded activity, suggest that loan terms can be onerous.)

The Gulf states and other Arab countries are also limited. In August 2018, Saudi Arabia contributed $100 million, but this was for stabilization to provide basic services in northeast Syria rather than to help the country reconstruct and thrive. And Riyadh has its own budget difficulties, preferring to do business with friendlier, more stable countries.

So Syrians themselves will likely need to fund some level of their own reconstruction. Wealthy businesspeople are likely to invest in projects, perhaps with overt or unstated government participation, in government-controlled areas and likely involving land stolen from refugees and other displaced Syrians. And people receiving remittances from abroad will use them for personal reconstruction projects, such as rebuilding homes.

The real challenge will be whether the West will take further steps to block any activity in Syria if Assad stays in control. In January, the EU added 11 prominent businesspeople and five entities to its sanctions list on the grounds that they were building on land expropriated from displaced Syrians. And the U.S. Congress is likely to approve a rigorous Syria sanctions bill, a previous version of which gained the support of the White House.

Bringing a stable peace to Syria requires reconstruction that knits the country together. With Assad in control, that seems unlikely. Instead, Syrians will see the kind of strict internal security measures that triggered revolts in the first place, providing fuel for more unrest—and a security challenge to the region for years to come.

Howard J. Shatz is a senior economist at the nonpartisan, nonprofit RAND Corporation.

This commentary originally appeared on Newsweek on April 5, 2019. Commentary gives RAND researchers a platform to convey insights based on their professional expertise and often on their peer-reviewed research and analysis.