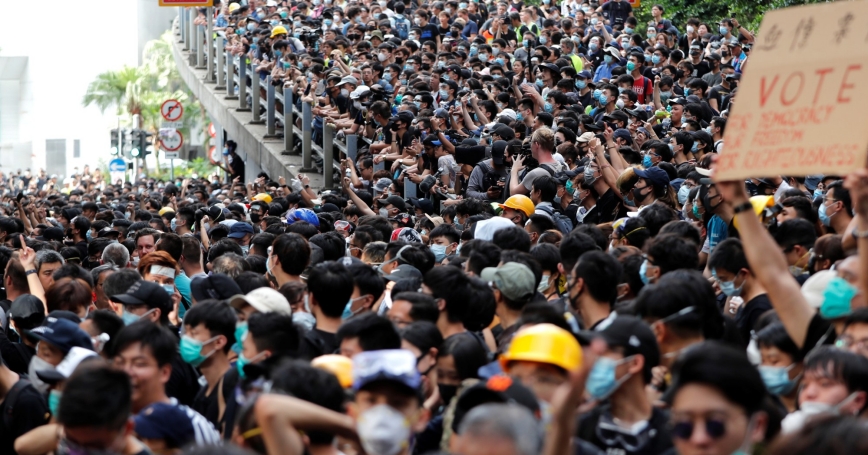 Protesters outside police headquarters demand Hong Kong's leaders to step down and withdraw the extradition bill, in Hong Kong, June 21, 2019

The enormous protests in Hong Kong since this spring have led to fresh fears about the viability of China's “one country, two systems.” On June 10, the U.S. State Department expressed concern that “the continued erosion of the 'One Country, Two Systems' framework puts at risk Hong Kong's long-established special status in international affairs.” Created in the early 1980s by Deng Xiaoping, China's “one country, two systems” policy aims to peacefully integrate (or reintegrate, from Beijing's unique perspective) formerly colonized territories by granting them semiautonomous status in exchange for recognizing the existence of “One China.” It's an idea that Macau and Hong Kong officially subscribe to and Taiwan fiercely resists—but one increasingly questioned from all sides.

To mark the 20th anniversary of the Hong Kong handover from British to Chinese rule in 1997, Chinese President Xi Jinping in July 2017 pledged to “unswervingly implement the policy of one country, two systems” in Hong Kong. But the protests against a controversial new extradition law pushed forward by Hong Kong Chief Executive Carrie Lam mark only the most recent instance when the difference between Beijing's vision of two systems and Hong Kongers' perspective has been exposed.

Beijing's strict vetting of candidates for the chief executive position by late 2014 led to the Occupy Central or Umbrella Movement protests to call for universal suffrage, which is a long-term goal of Hong Kong's Basic Law. Under obvious duress from Beijing, the local government in Hong Kong has also taken a number of actions that have greatly unnerved the population, including removing duly elected lawmakers for their pro-democracy stances, imprisoning pro-democracy activist leaders, banning the Hong Kong National Party for its pro-independence agenda, and targeting those who are critical of Beijing's handling of Hong Kong.

That inspires little confidence in nearby Taiwan—the prime target of Beijing's messaging over one country, two systems. The ambition on the mainland side has long been “peaceful reunification”—a voluntary submission by Taiwan, sold under the promise that the island would retain its own systems of law and government. On Jan. 2, Xi commemorated the 40th anniversary of China's “Message to Compatriots in Taiwan” by equating, for the first time, One China with the so-called 1992 Consensus. The 1992 Consensus was an agreement allegedly reached between Chinese officials and Taiwan's then-ruling (now opposition) party, the Kuomintang (KMT), acknowledging the existence of One China, but with the KMT subsequently noting each side could hold “different interpretations” of what One China means. Up until Xi's speech, Beijing had allowed for the KMT message to proliferate, but he clearly dispensed with that approach. In addition, Xi, as all Chinese leaders have done since Deng, reiterated the importance of one country, two systems as the only viable model for cross-strait relations.

Even the missteps, whether in Hong Kong or Taiwan, have not diminished Xi's gusto for implementing 'one country, two systems' on his strict terms.

The 1992 Consensus was already a shaky prospect for Taiwan, especially under President Tsai Ing-wen. Responding to Xi's speech, Tsai said that “we have never accepted the 1992 Consensus” and “Taiwan absolutely will not accept one country, two systems.” Elected in 2016 as the candidate of the independence-leaning Democratic Progressive Party, Tsai has turned out being an extremely pragmatic president—neither pursuing independence nor ceding ground to China on Taiwan's sovereignty, all while shoring up U.S.-Taiwan ties.

She is now emboldened to pursue this path further following her primary victory over her former premier, the pro-independence candidate William Lai. Tsai awaits the KMT challenger, who will likely be a more pro-China-leaning candidate, in the January 2020 election. Beijing had the opportunity to bolster the KMT's chances after the party's landslide win in local elections this past November, but instead, Xi chose to double down on the 1992 Consensus and one country, two systems—both extremely unpopular positions in Taiwan. It remains unclear how the KMT will campaign on these issues, but the party has already rejected Xi's speech, and Tsai's most likely KMT rival, Han Kuo-yu, has done the same.

The lone success story for the policy is Macau, which had been a Portuguese colony until its handover to Beijing in 1999. To be sure, academics have warned of rising censorship resulting from Macau's incorporation into the framework, and police in 2014 shut down an attempt by pro-democracy activists to push forward a national referendum on the reelection of Chief Executive Fernando Chui, who was running unopposed for his second term. For the most part, however, there has been little tangible resistance to one country, two systems. And, significantly, Macau's judicial system appears undisturbed (PDF).

One key driver could be Macau's comparatively limited interest in maintaining a favorable international business environment through Western-style laws, given its primary focus on the gaming industry and the proliferation of casinos on the island. Another possibility is that the people prioritize the economic development China can bring to Macau rather than the maintenance of their civil liberties. The answer may be historical: Following protests that rocked the colony in 1966, the Portuguese, well in advance of the handover, agreed to incorporate Chinese Communist Party elements into Macau's governance, leaving the island with little tradition of resistance.

But one far less discussed yet perhaps highly significant future battleground for one country, two systems in the coming years is the Taiwan-administered island of Kinmen, also known as Quemoy. Located just off the shore of mainland China, Kinmen tends to align more closely with China than Taiwan. Prior to Taiwan formalizing the “Three Links” to mainland China—transportation, postal services, and trade—in 2008, Kinmen had already established its own “Three Small Links” by January 2001, underscoring that it has been consistently out ahead of Taipei on cross-strait relations. More recently, it has accepted Beijing's infrastructure development assistance in the form of a fresh drinking water pipeline from the mainland.

Moreover, the newly elected county magistrate of Kinmen, Yang Cheng-wu of the KMT, has expressed his support for additional Chinese plans to supply gas and electricity to the island and to construct a bridge to connect Kinmen with China's Xiamen Airport in the future—known as the “New Three Links.” Yang also wants tourism between Kinmen and the mainland to rise from an expected 2 million travelers this year to 30 million by the time his term ends in 2022. In January, he traveled to Fujian province to discuss these proposed areas of cooperation.

Although these steps are a far cry from supporting one country, two systems, Yang's acceptance of China's elevated role in Kinmen's affairs has to worry Taipei. This would not be the first time Kinmen has had pro-China leadership. Before departing as deputy magistrate, Wu Cherng-dean last August urged Kinmen to not oppose one country, two systems. He also sought to increase the number of Chinese permanent residents living in and buying property in Kinmen, and to switch over to the Chinese renminbi currency. Wu has also argued that Kinmen should “become a peninsula” of China, in part because Taiwan does not value Kinmen, in his view.

Comments like this only embolden Chinese views that one country, two systems just needs time and maybe a bit of coaxing to eventually succeed. Even the missteps, whether in Hong Kong or Taiwan, have not diminished Xi's gusto for implementing the formula on his strict terms. Why he is doing so is unclear. It could be linked to Xi having to demonstrate strength internally to maintain control or simply be the result of overconfidence in China's abilities to expand Beijing's administrative grid. Either way, the framework is here to stay.

Yet it would also appear that Beijing's one country, two systems policy only holds promise when left completely unchallenged, as in Macau. The prospects for voluntary adoption in Taiwan or Taipei-governed Kinmen are bleak, despite some local enthusiasm in Kinmen. Hong Kong was forced to integrate into the formula, and this has resulted in disaster for Chinese leaders, who clumsily attempted to offer counternarratives—blaming foreign forces, of course—to explain away perhaps one of the largest protests in world history occurring on their watch.

Going forward, the United States and the West as a whole should keep a wary eye on Chinese activities within this arrangement and work together with the people of Hong Kong to rein in Beijing's excesses. They should further support Taiwan's decision to reject one country, two systems, and were that ever to change, they should ensure it is a freely made decision uninhibited by Chinese coercion.

This commentary originally appeared on Foreign Policy on June 21, 2019. Commentary gives RAND researchers a platform to convey insights based on their professional expertise and often on their peer-reviewed research and analysis.