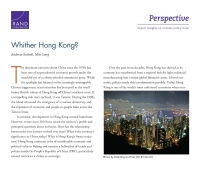 This Perspective considers the future trajectory of the Special Administrative Region in light of the 2014 prodemocracy street protests and their aftermath. First, it examines economic and political trends in Hong Kong–China relations; second, it considers the issues triggering these recent protests; third, it considers the effect of the protests; fourth, it explores possible future scenarios; and lastly, it offers some concluding observations.

This study was made possible by the Cyrus Chung Ying Tang Foundation and was conducted the RAND Center for Asia Pacific Policy (CAPP).