India and Kashmir, Now One 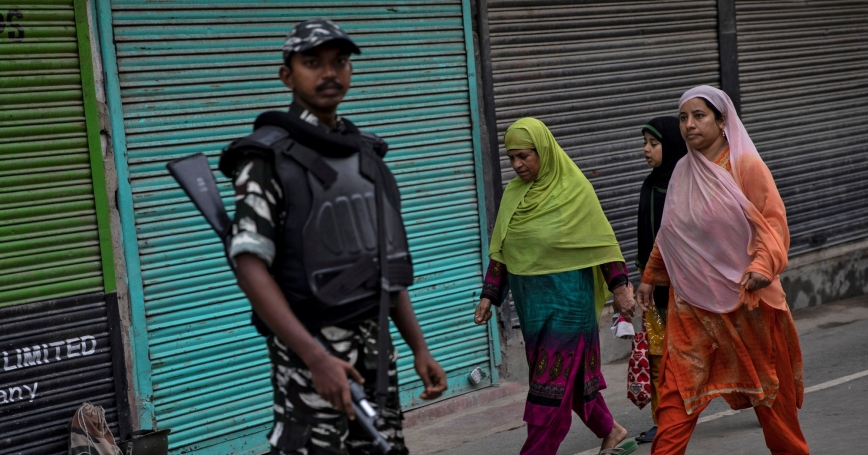 Kashmiris walk past Indian security personnel during restrictions after the scrapping of the special constitutional status for Kashmir, in Srinagar, August 11, 2019

In a legally risky move already having consequences on the ground, India's government on Aug. 5 scrapped Article 370, the part of the 1956 Constitution that gave the state of Jammu and Kashmir special autonomous status after independence. How consequential is this for India, and how should the international community react?

Largely seen as an incentive to accede to India rather than Pakistan at the time of independence, Article 370 said that the federal laws of India, which apply to all typical states, would only apply to Jammu and Kashmir with the consent of the state legislature. It was intended to be temporary and subject to further revision, but Article 370 became a “deemed” permanent feature when the state's constituent assembly was dissolved in 1956 without renegotiating it. As a result, changing Article 370 had been interpreted to be impossible in law.

There are practical reasons that argue for revoking Article 370. The first is that it acknowledges the geopolitical reality that Jammu and Kashmir is a permanent part of India. And yet the state's residents have been subject to different rules. For example, one component of Article 370 is Article 35A, under which Jammu and Kashmir got to define who may be a permanent resident. The state has only ever approved original residents of the state to be permanent residents. Citizens from elsewhere in India living in Kashmir could not buy property or vote there. Scrapping Article 370 will change that. Hence, in the interest of having a system of common laws across the country, it makes sense to do away with Article 370.

Article 370 has also failed to serve the interest of the state's residents and led to interference in the state's affairs by New Delhi from the start. The national government under the Congress party used a continual stream of executive orders, imposition of federal rule, and the army to undermine state autonomy. There were two periods of genuine autonomy in Kashmir—in 1952-54 and in 2002-08—both negotiated with local politicians in response to long periods of turmoil. These should have been used by both sides to secure a permanent resolution of Kashmir's status, but were not.

New Delhi also asserted control of Jammu and Kashmir by fostering and supporting corrupt local politicians. The first five years of Prime Minister Narendra Modi's rule (2014-19) were no different from the erstwhile period of the Congress party rule, with alliances with corrupt local politicians and the heavy use of the army. The result was a clear trend of increasing violence and civilian deaths.

As a result, nearly all of the last seven decades have been marked by a political battle between New Delhi and the people seeking the right to determine their own future. On the ground this manifested as a clash between the army and the people of Jammu and Kashmir, who lost their lives and equity in ever-increasing numbers.

Pakistan has been a player, too, particularly from 1990 to 2002, supporting the local insurgency with finance, training and, allegedly, boots on the ground. India is a strong, federal state, however, and to blame Pakistan as the primary source of trouble is foolish. This has been mostly an internal battle in India.

The biggest sufferers have been the residents of Jammu and Kashmir. At independence, it was one of India's richest states. It is now the poorest and has the lowest human development index among Indian states. This suggests that it will take decades, even if the uncertain prospect of peace is realized, for it to recover.

The revocation of Article 370 likely will be challenged in the courts. There is the old argument that the Union has no legal authority to revoke Article 370. Also, under Article 3 of the Constitution, Parliament can only consider a bill that diminishes the area of a state or changes its name after the president refers it to “the legislature of that state for expressing its views thereon.”

It could be argued that, rather than follow this basic principle of federalism, the Modi government introduced the change in stealth, preceding the move by closing down land-line and mobile services and all internet access, banning public meetings, putting leading politicians under house arrest, and increasing the presence of the army. Further, its directive stripped Jammu and Kashmir of its status as a state altogether. It is now a Union Territory, administered directly by New Delhi. The Modi government says this status is intended to be temporary—but of course, it could be as “temporary” as Article 370 was.

India's Supreme Court, however, will put off making any key decisions for years if its recent record is any guide. By that time it will likely be too late to revive Article 370.

The Modi government could use its new, direct authority to invest in human development and clean governance in Jammu and Kashmir, attracting national and international goodwill.

For the last week, protests have erupted in Jammu and Kashmir despite tens of thousands of soldiers on the streets—and despite a news blackout, images of the violent crackdown are making their way out. Still, the protesters aren't likely to find much support for reversing course on scrapping Article 370. Because the deaths and violence rarely spill beyond the state boundaries, the rest of India has so far been apathetic to Kashmir's plight. They are likely to welcome the opportunity to try something different.

The Indian government seems unworried about adverse international reaction. Pakistan has—expectedly—protested the move; it downgraded diplomatic ties and said it would halt trade with India. But some of Pakistan's key financial sponsors, including some Gulf states, have stated that they view the changes as India's internal matter.

Despite U.S. President Donald Trump's recent offer to mediate on Kashmir, the U.S. administration appears likely to remain silent as well—as it has on most internal matters in India. (The exception being the widespread abuse of human rights in Kashmir, on which it has been a regular, if ineffective, commentator.) China has opposed India's move, but only because the directive also carves out another new Union Territory, called Ladakh, from the erstwhile state of Jammu and Kashmir—and part of Ladakh is claimed by China.

The Modi government, which is seen by Kashmiris to have little political interest in winning their hearts, says it is keen to revitalize the economy of Kashmir and focus on the development of its residents. Local residents fear that this means that, with Article 35A revoked, it will rebalance the territory's Muslim majority by supporting an influx of migrants from the rest of India. If that happens, local resistance and national suppression will result in Kashmir remaining a police state.

The Modi government could more productively use its new, direct authority to invest in human development and clean governance in Jammu and Kashmir, attracting national and international goodwill in the process. Its five-year record in New Delhi has been mixed on these counts, but the massive mandate Modi received in his recent re-election suggests that the Indian people think he is still the best bet for the future. Hopefully, that will be true for Kashmiris as well.

Rafiq Dossani is a senior economist at the nonpartisan, nonprofit RAND Corporation, where he directs its Center for Asia Pacific Policy.