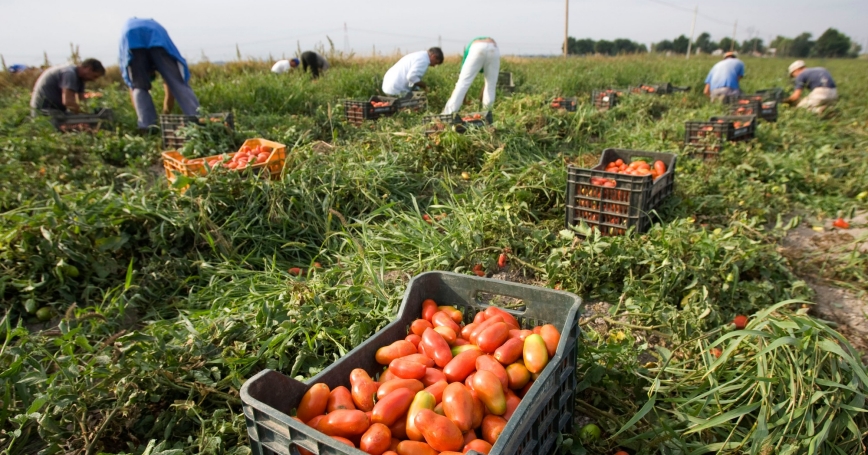 Farm workers pick tomatoes in the countryside near the town of Foggia, southern Italy, September 24, 2009

Thousands of seasonal strawberry pickers in Spain are women from Morocco on temporary visas. To supply markets in the United Kingdom and elsewhere with fresh berries, they work 12-hour shifts in overheated greenhouses, live in overcrowded rooms and according to lawsuits, some were victims of human trafficking, sexual assault, and rape.

In Turkey, the Syrian refugees who pick most of the world's hazelnuts live in roadside plastic tents and get paid with IOUs until the end of harvest. Child labor is common. In Southern Italy, the mafia recruits African migrants directly from shelters to labor in citrus or tomato fields. Gangmasters then seize whatever identity documents they have and threaten violence against them if they leave.

Those at the bottom of the agricultural supply chain are vulnerable to horrible abuse—slavery, at the extreme. But the same was true in the tomato fields of Florida in the United States until not too many years ago—and the solution developed there may offer a roadmap for doing right by those who put food on the market shelves.

Those at the bottom of the agricultural supply chain are vulnerable to horrible abuse—slavery, at the extreme.

Florida's tomato fields were declared “ground zero for modern-day slavery” by one U.S. government prosecutor in the early 2000s. Like the conditions now being reported on in Europe, in Florida, farmworkers were subject to rampant abuse and even held against their will and coerced or physically forced to work in the fields.

Farm owners kept the treatment of workers at arm's length by using middlemen to lure workers from Haiti, Mexico, Central and South America, but also the United States, with promises of high wages for hard work. The reality was hours of unpaid work and dangerous conditions. Hiring and transportation fees and exorbitant prices for food and housing led to inescapable debt.

In Florida and the recent European cases, it is migrant farmworkers from other countries who are particularly vulnerable. They are physically isolated in remote rural areas and socially isolated because most don't speak the local language. Armed guards, threats of violence, visible beatings, sexual abuse and a culture of racism complete the trap of isolation and fear.

When the first egregious cases of farmworker slavery came to light in Florida in the mid-1990s, law enforcement officers and U.S. attorneys were ill-equipped to handle them. They didn't know how to interview workers who followed the seasonal crops and were threatened if seen talking to authorities. Cases could drag on for years. Just three Department of Labor inspectors were assigned to enforce labor laws for all the farms in the state. Its offices were open 9 a.m. to 5 p.m. weekdays, when a farmworker would be in a field closely watched and far from a phone. Even if someone managed to call, they would have reached an answering machine with a message in English.

So it is in Europe today, where farmworkers are ignored or worse by government officials. In Italy, African workers without residency permits are demonized by politicians and regarded as ineligible for legal protection. The mafia (particularly the 'Ndrangheta in the region of Calabria) maintains a parallel “legal system” with little sympathy for a cheap labor force that organized crime profits from. In Spain, those few Moroccan women willing to report the sexual crimes against them find themselves locked in an interminable legal process.

The situation on Florida farms reached a turning point in late 2010. The Coalition of Immokalee Workers, a group of farmworkers who had been organizing around the town of Immokalee, had laid the issue of farmworker abuse directly at the feet of the buyers of most tomatoes: fast-food chains like Taco Bell and Burger King, then later grocers like Whole Foods and Trader Joe's. With their reputation with consumers at stake, those companies agreed to buy tomatoes (and now, increasingly peppers and strawberries) only from growers that signed on to strict standards for tracking hours and wages, providing rest breaks, and preventing sexual harassment and verbal abuse.

The coalition's Fair Food Program essentially created a new model for agricultural labor and corporate social responsibility—and transformed the tomato fields from Florida to New Jersey. All parties—workers, growers, and buyers—have benefited. Tomato pickers in Florida get paid more and are safer. Wage theft, physical violence, and sexual assault have ended. At the same time, growers have a more stable and productive workforce. Retailers gained a more reliable supply chain and maintained trust with their customers.

Today every worker in every row in every field is a monitor ensuring crew leaders and farm owners comply with the Fair Food Program rules. A worker-to-worker education program teaches them about their rights and responsibilities and a 24/7 hotline is answered by people who speak the many languages of U.S. agricultural workers. A third party, called the Fair Food Standard Council, handles audits, disputes, violations, and corrective plans.

The Fair Food Program has been so successful in ensuring the human rights of farmworkers that it has been recognized by the United Nations, the Organization for Security and Cooperation in Europe, and the European Commission's Horizon 2020 program. Despite those plaudits, so far there are no parallel Fair Food Programs operating in Europe.

Dutch supermarket giant Ahold Delhaize (Albert Heijn, Stop and Shop) and the German ALDI group (Aldi supermarkets and Trader Joe's) have Fair Food Agreements in the United States and could lead the way in extending the principle of human rights for farmworkers in European markets. If they won't, consumers could also hold multinational corporations—including fast-food chains such as Subway and McDonald's that have big footprint on the continent—accountable. As Florida's tomato farms show, it's possible to transform European agriculture from a situation rife with exploitation to one that benefits every partner.

Susan L. Marquis, the dean of the Frederick S. Pardee RAND Graduate School, is the author of “I Am Not a Tractor! How Florida Farmworkers Took on the Fast Food Giants and Won.”