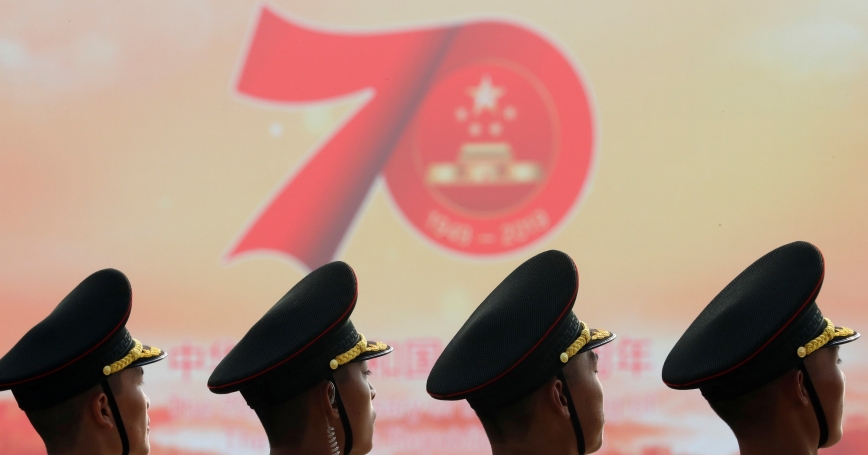 People's Liberation Army soldiers are seen in front of a sign marking China's 70th anniversary before a military parade in Beijing, October 1, 2019

The 70th anniversary of the founding of the People's Republic of China (PRC) provides an opportune moment to reflect on how the country's recent history has at every stage left its mark on the broader international community. And as it nears the long-held aspiration of national revitalization, the coming decades may see China's impact on the world reach unprecedented heights—if it can surmount imposing domestic and international hurdles.

China's “National Day,” held on October 1, commemorates the founding of the PRC under Chinese Communist Party leadership in 1949. Authorities regard the 70th anniversary as a hugely important occasion, and have accordingly planned a massive military parade featuring the latest weaponry and the participation of more than 10,000 troops. China will also hold a gala, a civilian parade featuring floats, and commemorative events around the country. To whip up public enthusiasm for the event, authorities have even banned “non-patriotic” shows on TV and instead ramped up patriotic programming.

For the world, the occasion may be regarded as a convenient marker of a third act in the PRC's revitalization as a great power. The Cold War provided the setting for the first act. In its first decades, a newly established government suffused with ideological fervor engaged the world through defiant provocation, with occasional wars along its borders, backing for communist insurgencies across Asia, and intense ideological confrontation with the United States and the Soviet Union.

The country's turn to reform and opening up in 1979 occasioned the start of the second act, one that lasted through the 2010s. Abandoning Mao's utopian fervor, Chinese leaders led by Deng Xiaoping sought stable, peaceful relations with the international community. China's integration revolutionized the global economy, as foreign companies expanded operations to take advantage of cheap labor, political stability, and improving infrastructure. With the emergence of a globalized network of production, the United States, Europe, Japan, and the developing world found their economies inextricably linked to China's. All parties faced a strong incentive to uphold stable ties despite the occasional tensions over the Tiananmen Square massacre, and festering disputes over human rights, Taiwan, and other issues.

Beijing faces the daunting challenge of improving China's dominant position as a global leader, or risk sinking into stagnation.

China's ascent as a manufacturing powerhouse upended and reconfigured the global economy. But the next 30 years may see its impact on the world reach new heights. In this third act of China's revitalization, Beijing faces the daunting challenge of improving its dominant position as a global leader, or risk sinking into stagnation. The country's soaring ambitions can be seen in the massive Belt and Road Initiative to integrate the Eurasian landmass. The pursuit of technological leadership, embodied in the controversial “Made in China 2025” program, could, if successfully implemented, profoundly reorder trade relations and production networks.

A bid for a greater role in global governance also underpins efforts to reshape norms and rules in international bodies such as the United Nations, the World Bank, and the International Monetary Fund. And where existing institutions fail to satisfy its demands, Beijing has set up alternatives (PDF) more amenable to Chinese preferences. As China's economic interests span the globe, the increasing presence of the People's Liberation Army (PLA) abroad raises the likelihood of greater Chinese military activity in distant lands. In 2017, the PLA established its first overseas military base in Djibouti.

Internationally, the trade war with the United States continues with little hope of ending any time soon, adding to the economy's woes. Tensions over technology transfer, Hong Kong, Taiwan, and other hot-spot issues have spurred worries that the world's two largest economies could be headed towards a new Cold War.

Xi's signature “Belt and Road Initiative” has come under fire as well. Critics warn it will exacerbate problems of global warming and mire countries in debt. Acknowledging the formidable array of challenges, Xi recently urged the party to adopt a "fighting spirit" in a cadre training session.

The PRC has proven impressively durable, especially when one considers the fact that its communist comrades in the ill-fated Soviet bloc disintegrated long ago. Despite the perennial predictions of looming collapse, the possibility that the country might fall to the “70-year itch” that doomed other autocratic states seems remote.

But endurance may not be good enough in coming decades. To achieve its goals of national rejuvenation, China needs to become a true world power. But with its economy softening and its politics gridlocked, an increasingly besieged China seems less and less likely to realize all of its goals. The China Dream has never seemed closer, and never more elusive.

Timothy R. Heath is a senior international and defense researcher for the nonprofit, nonpartisan RAND Corporation.

This commentary originally appeared on The Hill on October 1, 2019. Commentary gives RAND researchers a platform to convey insights based on their professional expertise and often on their peer-reviewed research and analysis.