Bad Idea: Assuming the Small Wars Era Is Over 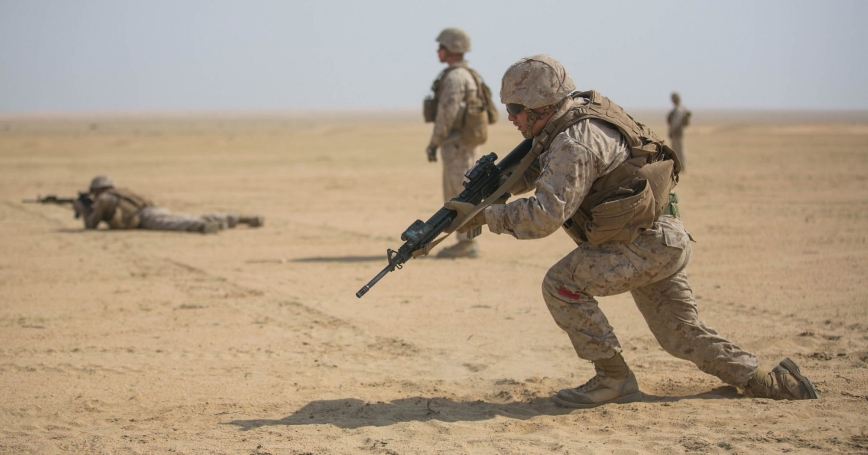 To see where the foreign policy winds in Washington are blowing, look to D.C.'s graduate schools, where aspiring civil servants and future defense strategists compete for national security jobs. In 2010, entering students studied counter-insurgency strategies and terrorist networks, polishing language skills in Arabic, Pashto, and Dari. In 2015, their successors enrolled in classes on grey-zone warfare and limited interventions in order to get to the field's cutting edge. Security studies students matriculating in 2020, however, know the market demands have shifted. What Washington wants now is expertise in strategic competition.

“After being dismissed as a phenomenon of an earlier century, great power competition [has] returned,” the 2017 National Security Strategy (PDF) declared. Concerned by Russian revanchism in Eastern Europe and growing tensions with China in Asia, U.S. scholars, commentators, and policymakers alike have convened conferences, tested historical metaphors, and probed the origins of the term itself. “For all the acrimony in Washington today, the city's foreign policy establishment is settling on a rare bipartisan consensus: that the world has entered a new era of great-power competition,” Center for a New American Security CEO Richard Fontaine recently wrote in Foreign Affairs.

This revived interest in great power politics (and the attending risk of major war) comes with an important, if oft unstated, corollary: the problem of small wars, waged between asymmetric adversaries and through low-intensity but often prolonged campaigns, is now of secondary importance. From President Obama's declaration that “America must move off a permanent war footing” and his administration's vaunted “pivot to Asia,” to President Trump's rhetoric of ending “endless wars,” the message is the same: the era of counter-insurgency, humanitarian interventions, and peacekeeping is fading, and a new period of great power competition (PDF) has begun.

As the United States braces for the “needed course correction,” force planners have placed a corresponding emphasis on redesigning force structure to “deal with a potential great-power threat. This will require making significant changes in the way the U.S. military is sized, shaped, postured, employed, and developed.” Were these changes to be fully realized, current trends suggest that they could come at the expense of the United States' low-intensity capabilities.

We do not question that substantial reforms and investment are needed to restore the United States' competitive advantages and prepare American forces for the risk of a major war with a peer or near-peer competitor. Achieving these aims will require accepting uncomfortable trade-offs. But in framing the United States' options as incongruous, the conversation may soon risk swinging too far in the other direction—inhibiting our ability to understand and manage a range of state and non-state threats in the near-future. In seeking greater attention to the pressing challenges presented by peer and near-peer adversaries, those advocating for a strategic reorientation have (even if inadvertently) contributed to the dangerous notion that the United States need not continue to prepare to fight weaker adversaries like non-state militants and irregular forces and to conduct operations that fall below the threshold of major war. Intended as a prudent reprioritization, the dramatic shift in demand for more “great power gurus” threatens to shelve the experience and institutional knowledge accumulated over the last two decades.

We have had this debate before. During the 1990s, the Clinton administration's embrace of humanitarian interventionism spurred a backlash from those who argued the new peacekeeping and stability missions were eroding the military's ability to conduct conventional operations. On the campaign trail, George W. Bush pledged to withdraw U.S. troops from Haiti and the Balkans and advanced the argument that the United States' interventions abroad were symptomatic of a dangerous strategic drift that weakened the United States' ability to maintain conventional strengths. Then came the 9/11 terrorist attacks, which brutally revealed the power of a new generation of irregular threats and the costs of the United States' failure to generate tools to manage the low-intensity conflicts that had fueled al-Qaeda's growth.

The failure of the United States' “big small wars” in Iraq and Afghanistan, the seemingly intractable conflicts in Syria, Yemen, and Libya, and the ongoing erosion in long-held American competitive advantages have strengthened the Pentagon's desire to return to what it does best: high-tech, large-scale conventional conflict paired with targeted SOF operations. Counterintuitively, though, the techniques, tactics, and procedures associated with low-intensity warfare are only growing more important as the risk of a major confrontation with a peer or near-peer competitor increases.

The common assumption that a great power conflict would be conventional is flawed. No one denies that Russia and China are investing substantially in artificial intelligence, cyber assets, and space technologies—as well as missiles and air defenses—in an effort to winnow the U.S. advantage and bolster their anti-access/area denial capabilities (PDF). However, as former Secretary of Defense James Mattis is fond of pointing out, the enemy also “gets a vote” in how the next war will be fought. Aware their militaries cannot hope to win a conventional battle against the United States in the near term, both Russia and China are also investing in substantial asymmetrical resources to exploit existing American vulnerabilities laid bare over the last two decades. From its “little green men” in Georgia and Ukraine to its proxies in Syria and Libya, the Kremlin has demonstrated a hybrid maneuver strategy that involves deploying Russian advise-and-assist teams to support indigenous units, who bear the brunt of the fighting while receiving support from Russian conventional forces. Likewise, Chinese strategists continue to emphasize asymmetric strategies, and the Science of Military Strategy 2013 (PDF), a leading Chinese military tract, advocates the use of a variety of domains of conflict when engaging U.S. conventional forces. Beijing's use of “little blue men” to enforce its territorial claims in the South China Seas offers a preview of how it might mobilize civilian mariners in a future conflict. Should a future war reach land, it takes little imagination to conceive of the challenges of conducting urban warfare in Taiwan, Hong Kong, or Shanghai.

And weaker adversaries are also investing in asymmetric capabilities. Iran has long compensated (PDF) for its conventional weaknesses by developing robust paramilitary and surrogate forces and a formidable arsenal of low-cost assets to swarm an adversaries' superior naval or ground forces. Years of fighting in Syria, where Iran has deployed its own IRGC-Quds force, worked alongside its partner Hezbollah, and organized Shi'a militias on the ground, have only honed this strategy further. Neither sanctions nor negotiations have blunted Tehran's asymmetric capabilities. The recent attack on an Aramco facility in Saudi Arabia demonstrates that Iran's irregular tactics can force the United States onto its backfoot.

Moreover, U.S. policymakers' stated desire to refocus on conventional adversaries like China, Russia, and Iran does not change the reality that a host of non-state actors continue to sow unrest throughout Central Asia, sub-Saharan Africa, and the Middle East, undermining regional stability and threatening U.S. and allied interests. Longitudinal data show that the vast majority of armed conflicts today are internationalized civil or sub-state conflicts, rather than conventional interstate wars. The historical record is rife with instances in which localized crises escalated into wars between great powers, whether through alliance commitments, national rivalries, or miscalculation. A succession crisis in Spain sparked the Franco-Prussian war; political instability in the Balkans triggered the First World War. And there have been near misses, like the 1973 Yom Kippur War, which could have triggered a nuclear exchange. Even the “long peace” of the latter half of the twentieth century sowed bloody proxy confrontations between the United States, the Soviet Union, and its surrogates across the Global South.

Whether today's insurgencies, sectarian conflicts, and other limited wars will escalate remains to be seen. Regardless of whether the United States decides to intervene directly, to work through (PDF) regional partners, or to sit on the sidelines and manage the potential ramifications, any effort to respond to these challenges will require retaining (and improving) specialized knowledge and capabilities designed for low-intensity operations. Similarly, retaining expertise in stability, peacekeeping, and humanitarian operations helps decrease the possibility of escalation. Put simply, peacekeeping is a tool for great power conflict resolution.

The national security community doesn't need to deny the potential for future great power conflict—or neglect to prepare for it—in order to acknowledge the enduring reality of asymmetric threats. Indeed, some analysts are probing past irregular wars for lessons that could inform future confrontations among great powers. Others have found that existing conventional and irregular capabilities and approaches can be dual-use and may be equally applied (PDF) across levels of conflict. But the United States must be vigilant against letting the pendulum swing too far in the other direction by focusing solely on a conventional, symmetric future conflict and would be wise to acknowledge the coexistence of multiple categories of dangerous actors. Containing, resolving, and even preventing smaller conflicts is essential to avoiding bigger ones. Washington may face these wars for many years to come—and could have to prepare for the undesirable tradeoffs. The era of small wars is not over.

Alexandra Evans is an associate policy researcher at the nonprofit, nonpartisan RAND Corporation. Alexandra Stark is a senior researcher at New America.

This commentary originally appeared on Center for Strategic and International Studies on December 13, 2019. Commentary gives RAND researchers a platform to convey insights based on their professional expertise and often on their peer-reviewed research and analysis.