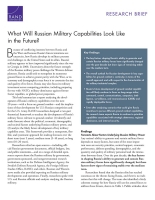 What Will Russian Military Capabilities Look Like in the Future?

Because of conflicting interests between Russia and the West and because Russia's future intentions are uncertain, how Russia develops its military presents real challenges to the United States and its allies. Russia's military appears to have improved significantly since the war in Georgia in 2008. Uncertainty about the future strength of the Russian military poses challenges for Western defense planners. Russia could seek to strengthen its numerous ground forces to achieve greater parity with the West, or its economy and demographics may force it to constrain the size and quality of its forces. Russia may also focus its military investment across competing priorities, including preparing for war with NATO, military dominance against former Soviet republics, or global power projection.

This brief summarizes a report analyzing the development of Russia's military capabilities over the next 20 years — with a focus on ground combat — and the implications of that development for U.S.-Russian competition and for the U.S. Army. RAND researchers designed a two-part theoretical framework to analyze the development of Russia's military forces relevant to ground combat: (1) identify and make forecasts about the political, economic, demographic, and societal factors underlying Russian military power, and (2) analyze the likely future development of key military capability areas. This framework provides a transparent, flexible, and systematic approach for making forecasts over the short term (next 5 years), medium term (5–10 years), or long term (10–20 years).

Researchers relied on open sources —including official Russian government documents, official budgets, law, and public statements — and on a range of detailed open-source reports about the Russian military by government, government-sponsored, and nongovernmental research institutions, such as the Defense Intelligence Agency, the Swedish Defense Research Agency, the Foreign Military Studies Office, RAND, and others. Russian and Western news media also provided reporting on Russian military developments and operations. Finally, researchers spoke with U.S. and Russian officials and analysts studying the Russian military.

Any nation's ability to generate and sustain military forces depends on many factors, but some of the most important ones are security priorities, societal support, economic performance, defense spending, demographics, and the quantity and quality of military personnel and the interactions between them. Over the past decade, the key factors in shaping Russia's ability to generate and sustain Russian military forces have significantly changed, but these factors show signs of remaining stable over the medium term.

Researchers found that the Russian elite has reached consensus on the threats facing Russia, and there is no indication that this will change. The team also identified a fairly coherent strategy for how Russia will use the armed forces to address these threats, shown in Table 1. Public attitudes show support for Russia's government, foreign policies, and the military.

Russia is projected to experience relatively low economic growth of 1–2 percent of gross domestic product (GDP). Russia's military budget has increased substantially, especially because of growing acquisition expenditures, although future military budgets are expected to level out and grow proportionately to GDP. While Russia will not enjoy major population growth, its demographic situation is not crippling. Russia has also built a relatively stable mixed conscript and contract manning system, enabling it to address the quality challenges that undermined its military in the late 1990s and early 2000s.

The overall outlook for Russian development in these key capabilities for ground combat is continuity, in terms of the overall approach and with respect to the characteristics of the military-industrial complex.

Russia's maneuver ground forces are the prime example of the retain-and-adapt approach. The ground forces have received a small proportion of resources for procurement and modernization. Modernized Soviet-era platforms, such as the T-72B3, can be made almost as effective as new platforms by adding new components (such as fire control or active protection systems) at a fraction of the cost. Russia has maintained a massed and area effects threat by retaining a large volume of Soviet-era indirect fire launchers and munitions, with less significant modernization. Russia's rapidly deployed forces — including the Airborne and GRU-Spetsnaz — also build on Soviet-era formations but represent new and dramatically reformed forces, with novel C4ISR systems and other state-of-the art equipment. Russia's internal security forces have been built from pieces of Soviet-era structures within newly created or reorganized institutions.

While Russia has also retained and adapted Soviet designs in acquiring long-range strike systems (i.e., systems used at the theater level, generally with ranges of more than 100km), it has emulated and adapted U.S. operating concepts in its doctrine and approach. But Russia needed the additional resources that became available after 2008 to begin deploying additional air-, sea-, and ground-launched long-range strike systems. Russia's C4ISR represents a combination of legacy Soviet systems and emulation and adaptation of Western concepts and approaches, such as net-centric warfare. Russia's highly advanced air defense systems build on the extensive Soviet-era investment in air defenses, while its electronic warfare is an example of where Russia has invested in capabilities that can asymmetrically counter perceived U.S. advantages.

The RAND team also examined how the Russian government has funded or subsidized the defense industry. In some areas, particularly long-range strike and C4ISR, the Kremlin has invested significant resources in recapitalizing particular enterprises, indicating that it is prioritizing the systems they produce. In other areas, such as air defense and electronic warfare, Russia has provided long-standing support for companies producing strategically significant systems. A third pattern — the collapse and incorporation of troubled enterprises into state-owned holding companies — reflects the fate of Russia's main producers of maneuver ground forces (tanks and infantry fighting vehicles), partly because of weak demand and undercapitalization. A fourth approach involves investing in more-speculative technologies, but these efforts are quite modest.

Russia's development of ground combat capabilities is likely to continue to focus on long-range strike, C4ISR, and rapidly deployable forces. Russia's military forces will generally meet their security goals within available resources. Russia will likely face higher costs for military recruitment because of its declining population of military-age males through 2024 but should be able to find and recruit enough personnel to maintain the current size of its military forces. Russia will continue to focus on achieving regional dominance in its near abroad, emphasizing the readiness and professionalization of a small component of the force. Some expansion and incremental improvements will occur in long-range strike, rapidly deployable forces, C4ISR, and air defense, while relative stagnation will occur in the maneuver ground forces and indirect fires. Russia will pursue continued collaboration with the West in activities such as counterterrorism in the Middle East, while attempting to pivot east toward closer relations, especially with China.

But because the future is unknown, the research team analyzed two changes that could give Russia incentives to pursue different ground combat capabilities: fluctuating energy prices, which could affect economic growth, and changes in Russia's economic growth and security strategy because of shifts in relations with the West or China. After conducting that analysis, the team expects Russia to continue to prioritize capabilities associated with strategic deterrence, regional dominance, and internal security.

Policy Implications for the United States and the U.S. Army

Table 2 summarizes researchers' expectations for Russian developments in the eight capability areas and offers implications for the Army.

Strategic deterrence and internal security are inherently defensive, although strategic deterrent forces could threaten the United States and its allies. Russia clearly sees threats from NATO enlargement and the enhancement of U.S./NATO military capabilities on its borders. Russia's view of the threat could increase, or a crisis could develop that could lead to unintended military escalation. U.S. policymakers should be attuned to Russian perceptions of the threat posed by U.S. force deployments in Europe.

Regional dominance poses a more immediate threat to U.S. interests, given that Russia's primary desired sphere of influence includes former Soviet republics such as Ukraine and Georgia that aspire to join Euro-Atlantic institutions. Given Russia's growing capabilities and greater interests, U.S. support has not — and does not appear likely to be able to — significantly undermine Russia's regional dominance. Still, the U.S. military can explore options to bolster partners' security forces by improving the quality and capacity of niche areas, such as foreign area officers, units focused on providing security-force assistance, information operations, and military medical units.

Russia's expeditionary capabilities pose a complex challenge that will require both flexibility and preparedness for high-intensity conflict with well-armed adversaries. Although Russia has invested in special forces, long-range strike, and air defense, its military is not configured to be globally expeditionary, especially given gaps in expeditionary logistics and standing basing arrangements. Still, Russia may support proxies to undermine U.S. interests. The U.S. Army should investigate options to prepare for this challenge, such as ensuring that forces deployed where a conflict with Russia is conceivable have needed training and equipment and are prepared to take action while avoiding escalation.

Perhaps the most dangerous possibility is a major ground war with Russia. It is highly unlikely that Russia is preparing to initiate such a war, given its security goals and strategy, past decisions to develop key capabilities, and the constraints posed by its economy, demography, and personnel policy. Still, beyond Russia's advantage in the size of ground forces in Europe, existing research shows various ways Russia's current and projected near-term capabilities pose a threat to the U.S. Army in Europe.

Beyond filling Army capability gaps, a joint U.S. military and combined alliance response will be required. For allies who border Russian territory, including Poland and the Baltic states, finding ways to better compete with Russian military forces in possible collaboration with U.S. forces could be invaluable for deterring Russian subversion short of war and high-intensity conflict.