What Does Beijing Want from the Pacific Islands? 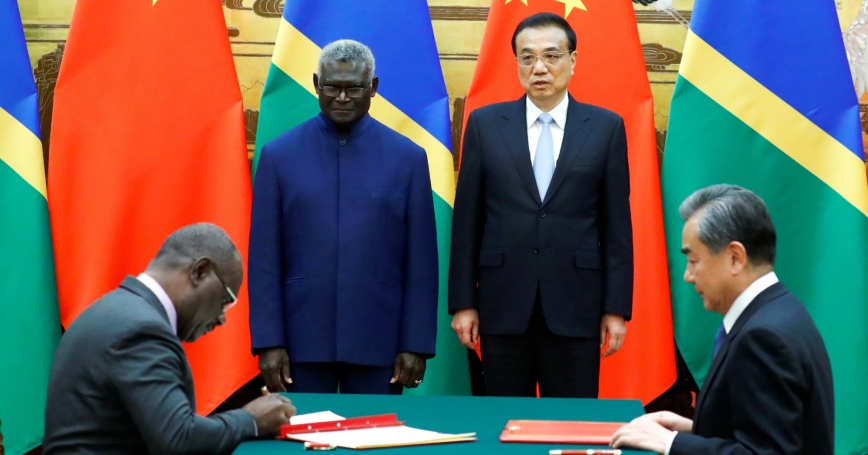 Leaders from the Solomon Islands and China attend a signing ceremony at the Great Hall of the People in Beijing, October 9, 2019

For the first time since the end of World War II, the international community is refocusing its attention on the geostrategic value of Oceania, the vast ocean region composed of Melanesia, Micronesia, Polynesia, and Australasia. The United States, Australia, Japan, New Zealand, France, and Taiwan are reinvigorating their efforts, in part in response to China's growing interest in the region. Beijing's activities over the last couple of months highlight a formidable two-pronged strategy of diplomatic and economic engagement that the United States and its allies and partners will have to vigorously compete against to maintain their preeminence in the Pacific.

In late September, the People's Republic of China (PRC) successfully persuaded the Solomon Islands and Kiribati to switch diplomatic recognition from Taiwan to the PRC, reducing Taiwan to a mere 15 diplomatic partners worldwide (including four in Oceania). Beijing clearly seeks to eliminate Taiwan's diplomatic presence to undermine President Tsai Ing-wen and diminish Taiwan's support in international fora. Luckily, as one of us has written, the odds of doing so are remote for the foreseeable future, especially in the Marshall Islands and Palau, who likely would not want to complicate their special agreements—known as Compacts of Free Association—with Washington by switching recognition from Taiwan to China. Regardless, our recent RAND research demonstrates that Beijing continues to be interested in increasing its influence in these Freely Associated States (FAS), along with another FAS country, Micronesia, that already recognizes Beijing.

In mid-October, China sent Vice Premier Hu Chunhua—an exceptionally senior-level Chinese leader—to attend the third China-Pacific Island Countries Economic Development Cooperation Forum held in Samoa. Following the event, Beijing touted the Belt and Road Initiative's (BRI) role in assisting Pacific Island states. Yet it is not only Beijing's trade and infrastructure spending via BRI and efforts to win over Taiwan's remaining official partners that worries the United States and its friends. Rather, it is how Beijing could parlay its political and economic influence into the security domain. Concrete examples already exist, such as in Vanuatu and Fiji, where Australia was concerned about reports of Beijing's interest in building military bases. Recent news that Beijing attempted to lease Tulagi in the Solomon Islands for 75 years also reflects how a diplomatic shift from Taiwan to China can involve security concerns. Excessive Chinese debt throughout the Pacific is another potential problem. Tonga and others are good examples.

And despite its own status as a major polluter, China underscored the importance of cooperation to combat rising sea levels due to climate change. Beijing probably sees an opportunity to exploit the Trump administration's withdrawal from the Paris Agreement—a move that diminished Washington's ability to compete with Beijing on a critical issue that threatens the survival of some Pacific Island states.

Going forward, it could be vital for the United States and its allies and partners to not only coordinate their respective strategies appropriately, but also to better understand and address the interests of Pacific Island nations themselves. Otherwise, Pacific Island states could view heightened interest simply to counter China as disingenuous and ephemeral.

Derek Grossman is a senior defense analyst at the nonprofit, nonpartisan RAND Corporation. He formerly served as the daily intelligence briefer to the Assistant Secretary of Defense for Asian and Pacific Security Affairs at the Pentagon. Michael S. Chase is a senior political scientist at RAND and an adjunct professor at Johns Hopkins School of Advanced International Studies (SAIS).

This commentary originally appeared on ChinaFile on December 9, 2019. Commentary gives RAND researchers a platform to convey insights based on their professional expertise and often on their peer-reviewed research and analysis.