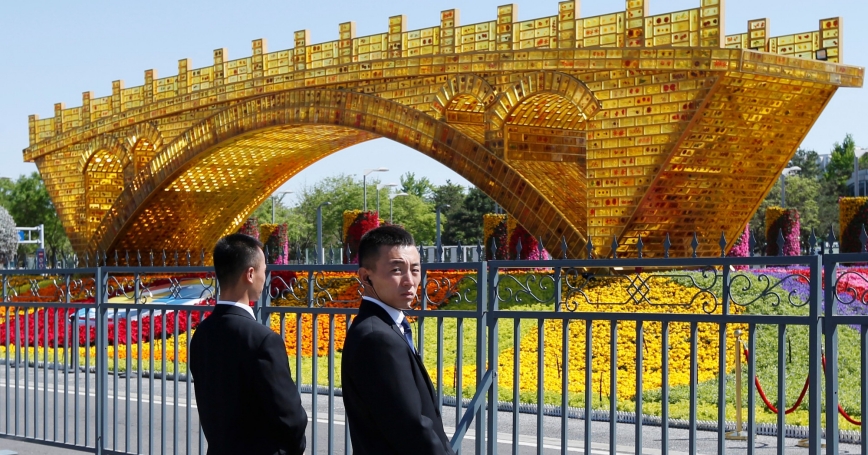 Security personnel stand guard near a “Golden Bridge on Silk Road” decoration for the Belt and Road Forum in Beijing, April 25, 2019

China's efforts to strengthen its economic and technological footprint across Europe may not garner as much coverage as its attempts to reduce its dependence on U.S. technology, or its mass internment of Uighurs. However, those efforts could strongly influence the course of U.S.–China relations.

U.S. alliances and partnerships across the Atlantic and in the Indo-Pacific anchor the postwar order—a system that has long underpinned U.S. preeminence. China assesses that it will be better positioned to compete with the United States if it can weaken those relationships through a combination of economic attraction and coercion. While that undertaking is more readily observable (PDF) in the Indo-Pacific, it is increasingly apparent in Europe as well.

Washington has conveyed to Brussels its concerns about China's strategic ambitions, threats to human rights, and industrial inroads, and its case may be gaining traction. Last February, citing the need to cultivate European champions that can compete more effectively with U.S. and Chinese multinationals, France and Germany published a joint manifesto (PDF) that called for overhauling the European Union's (EU's) regulatory framework. The following month, for the first time, the European Commission labeled (PDF) China a “systemic rival.” And this past October, the EU issued a report warning that “hostile third countries may exercise pressure on 5G suppliers in order to facilitate cyberattacks serving their national interests.”

However, while European countries are increasingly concerned by China's economic advances, they are neither on board with the Trump administration's decision to blacklist Huawei nor prepared to break with China openly. Instead, they are focused on the threats of terrorism and Russian revanchism, as well as the challenges of climate change and financial rebalancing.

The Trump administration's “America First” orientation would have stressed transatlantic ties even if the United States had not aggressively contested China's resurgence. And an economically growing and increasingly innovative China would have reinforced European concerns about U.S. decline even if the occupants of the White House had been avowed supporters of the transatlantic relationship. The confluence of these two phenomena, though, is especially potent.

The more of a foothold China gains across Europe, the more it will be able to challenge political sovereignty and intellectual freedom there.

Besides facilitating Huawei's forays throughout Europe, tensions between Washington and Brussels may be helping China find a more receptive audience for its Belt and Road initiative (BRI). Italy became the first G7 country to endorse the undertaking last March, and the following month Greece joined the “17+1 grouping,” a major initiative aimed at enhancing ties between China and countries in Central and Eastern Europe that many observers consider adjunct to the BRI. The more of a foothold China gains across Europe, the more it will be able to challenge political sovereignty and intellectual freedom there, as it has in Belgium, the Czech Republic, Norway, and Sweden.

One of the central challenges for the United States and Europe will be to forge a more united approach to China's resurgence, lest its growing ambitions and influence erode the foundations of the European and transatlantic projects.

Ali Wyne is a policy analyst and Scott W. Harold is a senior political scientist at the nonprofit, nonpartisan RAND Corporation.

This commentary originally appeared on ChinaFile on January 8, 2020. Commentary gives RAND researchers a platform to convey insights based on their professional expertise and often on their peer-reviewed research and analysis.