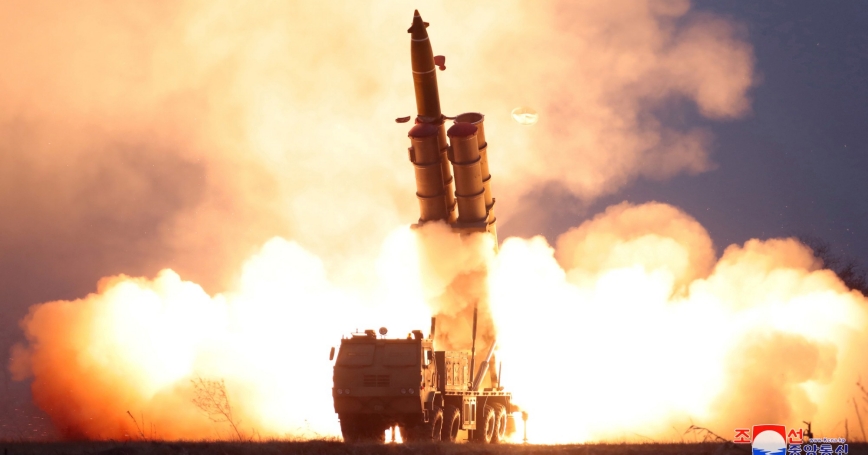 A projectile is fired during North Korea's missile tests in this undated picture released by North Korea's Central News Agency (KCNA) on November 28, 2019

North Korea began 2020 by announcing a shift toward a more hard-line foreign policy approach, declaring that it was no longer bound by the moratorium on nuclear and long-range missile tests it has maintained for two years. While it is bad news for all countries in the region, it is particularly unwelcome for Japan, as it faces possible North Korean missile launches in its vicinity as it prepares to host the 2020 Summer Olympic and Paralympic Games in Tokyo.

A logical step for Japan to deal with this problem is to closely coordinate its policies with its ally, the United States and its neighbor, South Korea. But this cooperation is facing obstacles, with more challenges possibly on the way.

North Korea hardened its position after almost two years of diplomacy with the United States failed to produce the results it wanted. As the prospects of diplomacy dimmed last year, North Korea began expressing its displeasure by testing short- and medium-range ballistic missiles. The test of its new submarine-launched ballistic missile landed in Japan's Exclusive Economic Zone (EEZ) last October—the first one to do so in two years.

When Japanese Prime Minister Shinzo Abe criticized one of North Korea's tests last November—calling it a ballistic missile test rather than a large multiple rocket launcher test as the country alleged it was—North Korea lashed out and warned that Abe “may see what a real ballistic missile is in the not distant future and under his nose.”

Japan's options are now limited, with diplomacy between the United States and North Korea stalled and no sign that North Korea will accept an offer by Abe to hold a bilateral summit without preconditions to solve their many disputes. Chief among their disputes is North Korea's Cold War kidnappings of Japanese citizens. The abduction issue continues to plague diplomatic relations between the two countries. Japan needs to strengthen bilateral policy coordination with the United States and South Korea, as well as trilateral cooperation among the countries to deal with North Korea's belligerence.

Japan and South Korea have yet to find a way to manage their bitter economic and historical disputes, and put their relationship on a more solid footing.

But some aspects of these partnerships are showing signs of strain at a time when Japan needs cooperation. The first sign is that relations between Japan and South Korea—which are often uneasy at best—deteriorated even further last year to their lowest level in decades. Abe met with South Korean President Moon Jae-in in China last month for the first time in over a year. But the two countries have yet to find a way to manage their bitter economic and historical disputes, and put their relationship on a more solid footing.

In addition, South Korea and the United States are struggling to agree on how much South Korea should pay for U.S. troops stationed in the country, after the United States asked for a significant increase in funds. The results of these talks will almost certainly affect Japan, who is already sensitive to any possibility of a reduction in U.S. military capability in South Korea that affects the ability to deter North Korea.

The negotiations are also important for Japan because the country will be holding its own talks with the United States this year about host nation support for U.S. troops stationed in Japan, ahead of the expiration of the Special Measures Agreement in March 2021. Japan's relations with the United States remain strong, undergirded by Abe's cordial personal ties with U.S. President Donald Trump. But Abe will face the challenge of dealing with Trump's forceful demands for an increase in host nation support.

North Korea has a history of exploiting differences between the United States and its allies, and such cleavages make it easier for North Korea to take aggressive actions without consequences.

There is much that is beyond Japan's control, but there are steps that it can take to try to de-escalate tensions. It could show a stronger commitment to improving relations with South Korea through public statements and high-level talks. In addition to continuing the dialogue with South Korea to try resolve some of their differences, Japan could also try to carve out space for working-level military cooperation with South Korea that is out of the limelight and insulated from politics as much as possible.

Whether North Korea will begin flight-testing missiles in earnest remains to be seen. While policy coordination among Japan, the United States and South Korea may not prevent North Korea from doing so, Japan's best shot at dealing with North Korea would be to seek a unified approach with the two other countries.

Naoko Aoki is an adjunct political scientist at the RAND Corporation.

This commentary originally appeared on East Asia Forum on January 25, 2020. Commentary gives RAND researchers a platform to convey insights based on their professional expertise and often on their peer-reviewed research and analysis.