Economic Development: A Recipe for Social Cohesion in India 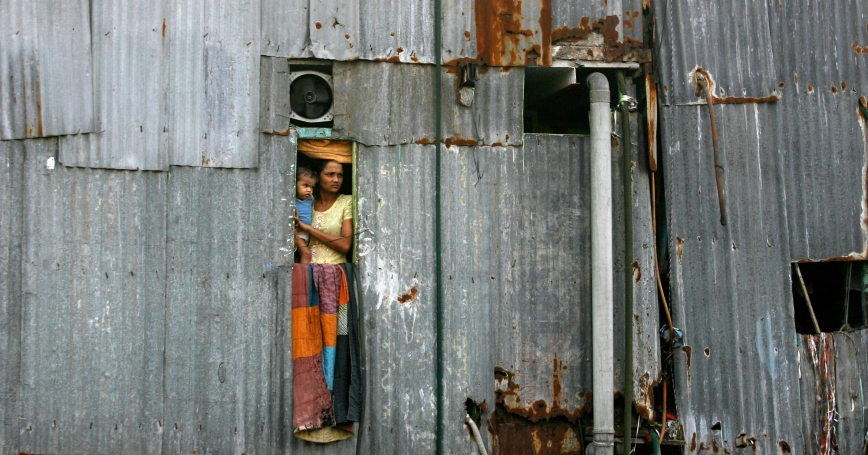 A woman holding a baby looks out of a window from a shanty in Dharavi, Mumbai, India, October 15, 2009

by Krishna B. Kumar and Rafiq Dossani

Even as India was strutting its best stuff for the recent official visit of President Trump, a tragic drama was unfolding in parallel in Delhi. Protests against the Citizenship Amendment Bill enacted a few months earlier, which grants amnesty to non-Muslim illegal immigrants from neighboring countries, turned violent. Dozens were killed. The sectarian violence and the breakdown of the rule of law that brought about this senseless loss of life comes at a particularly precarious time for the country's socioeconomic growth and development. It unnecessarily diverts energy and resources needed to revive an already battered economy.

Economic liberalization in the early 1990s brought rapid growth to the Indian economy and a reduction in poverty. However, after reaching a rate of over 8 percent in 2016, growth has slumped, with the current growth hovering around 4.5 percent, with dangers of further slowdown due to the COVID-19 virus looming. The experience of East Asian countries has shown that sustained growth in the order of 6 percent or more over decades is necessary for a country to become economically developed and eradicate poverty. India's slump over the last few years is a distinct stumble in its push to get on to such a growth trajectory.

Despite the tremendous progress made over the last few decades, even optimistic reports estimate 50 million Indians living under $1.90 a day, the threshold used to measure extreme poverty. Over 45 million children are stunted due to chronic malnutrition, a third of the world's share. India tops the list (PDF) of the number of people without access to clean water close to home: Over 163 million, close to 20 percent of the world's share. And, even as India enters a prolonged period of bulge in its working-age population, there is increasing concern that it is squandering its “demographic dividend” by falling short on providing its population with skills and creating enough jobs.

When economic growth leaves out particular groups, be they certain social classes or those in lower income groups, as has been happening in India for several years now, it creates a vicious circle of reduced capacity to build human capital and narrows economic opportunity. It also contributes to social tension. This would be a problem even in good times, when a rising tide could potentially lift all boats. In the current economic slump, the problem is worsened.

Given the staggering economic challenges that need attention, how may the nation refocus its attention away from sectarian divides to economic development?

Given the staggering economic challenges that need attention, how may the nation refocus its attention away from sectarian divides to economic development? While there is no easy answer, focusing on inclusive growth and development might offer one potential route. Broad-based development would likely decrease resentment among disadvantaged groups, increase their interest in protecting their stakes, and reduce the likelihood that they would be incited into committing acts of violence. Many studies (PDF) show the interconnection between poverty and internal conflicts.

The solutions, like the problem, may need to be both economic and social. On the economic front, Indian policymakers could focus more urgently on the above-mentioned needs in basic infrastructure and human capital, crucial for sustained growth. Addressing basic needs across all segments of society could have its own rallying effect. Continued improvement of the manufacturing sector could create jobs for the millions of youth who enter the labor market every year. Improving governance and enforcing the rule of law also could be critical. Neighborly love cannot be mandated, but good behavior can. Besides decreasing conflicts directly, an expectation that laws will be enforced could increase economic development.

On the social front, an important step forward could be to create independent and empowered watchdog bodies that ensure that all citizens are treated equitably. Bodies such as the National Human Rights Commission exist, but they lack the authority (PDF) to force responses to their complaints or even powers of advocacy. Such bodies could help ensure that unequal access to housing and jobs, and corruption are addressed.

The origins of and reasons for religious and social conflicts in India are highly complex, and it would be naïve to expect them to disappear overnight. But at this critical juncture, an unwavering commitment to development, supported by a commitment to fair practices to ensure that all segments of the society benefit, could improve the lives of millions and increase the odds for social harmony.

This commentary originally appeared on The Hill on March 13, 2020. Commentary gives RAND researchers a platform to convey insights based on their professional expertise and often on their peer-reviewed research and analysis.