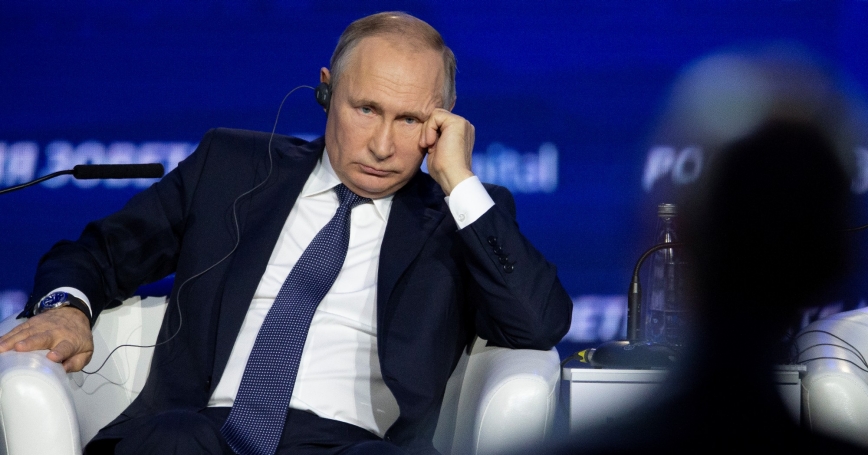 Burdened by coronavirus concerns, Russia's economic growth this year may fall to 1.2 percent, lower even than the 1.3 percent growth of last year, according to the Organization for Economic Cooperation and Development. Deteriorating living standards have put Russians on edge, and fears of economic stagnation have risen. Russia has the capacity to do better.

Some economic policies are outstanding. Prudent Central Bank policy and fiscal restraint have lowered year-over-year inflation to 2.42 percent and eliminated net external debt. Last year the government ran a budget surplus. If Russia were a member of the Eurozone, it might be the zone's best macroeconomic performer.

So why is the economy stagnating? Oil prices are below previous peaks, but factors under Moscow's control are structural barriers and geopolitical tensions.

First, the state controls a large share of the economy, and state-owned companies tend to be less productive than private business. Russia's Federal Anti-Monopoly Service says that prior to the 1998 financial crisis the state's share of the economy was about 25 percent of GDP, but by 2017-18 it may have risen to 60-70 percent of GDP. A lower estimate by the International Monetary Fund may be based on a different methodology.

A second problem is barriers to business activity. In the World Justice Project's Rule-of-law index, Russia ranks in the bottom one-third of countries measured. According to the Global Property Guide, among countries in Europe, only in Ukraine and Bosnia and Herzegovina are property rights less respected. According to Transparency International's Corruption Perceptions Index, Russia ranks in the bottom one-quarter of all countries assessed.

A third structural factor is geopolitics. Tensions between Russia and the West over Ukraine, Syria, election interference and other issues have caused investors to perceive higher political risks. The International Monetary Fund says Western sanctions subtract 0.2 percent from GDP growth each year. Some companies worry about the risk of future sanctions and hold off on making new commitments.

Fourth, Russia has imposed substantial budget austerity, a prudent measure in an uncertain economic climate, but one that has depressed aggregate demand.

In a Levada Center poll last year, 75 percent of respondents viewed Russia as a superpower. In the military domain this is true. In the economic sphere, Russia's GDP is less than Canada's, half that of Germany, and one-third that of Japan. Germany and Japan are arguably great powers but not superpowers. Even in the military domain, Russia risks being outpaced. Among all countries it ranks eighth in military spending, or less than one-quarter of China's expenditures.

A stronger economy ought to be appealing to both economic liberals and great power enthusiasts. Economic stagnation could undermine both popular morale and Russia's global position. Execution of the planned National Projects may provide some economic stimulus.

Deep reforms may be required to achieve sustained higher rates of economic growth.

Deep reforms, however, may be required to achieve sustained higher rates of economic growth. Russia is no stranger to reforms, but many Russians view them skeptically. In the 1990s monetary and privatization reforms were wrenching. In 2000 the Gref plan furthered reform, such as by ushering in tax and land changes and easing the business climate.

If enacted, reforms might again lift the economy and standards of living. They could strengthen the rule of law, property rights and investor protections, and boost competition. Russia could privatize more of the economy and allow private business to compete more effectively with state enterprise. A smaller government role in such areas as energy and heavy industry could increase competition and reduce opportunities for corruption. Reducing state ownership of commercial banks could promote competition in financial services. Corporate governance standards could be further raised.

On the geopolitical front, the West may reduce or eliminate financial sector sanctions if the Donbas war ended. Dialing down political warfare, ranging from election interference to blaming the U.S. for coronavirus, could lessen sanctions risks and calm some investors.

Russia's economy has much under-utilized capacity. Despite the bleeding of talent through emigration, the workforce is relatively well-educated and low-cost. This helps explain Russia's ranking in the top one-third (PDF) of the World Economic Forum's Global Competitiveness Index.

Deeper reforms and lower geopolitical tensions could help Russia unleash more of its potential. Whether or not coronavirus brings substantial harm to the economy, investors are hoping for a wake-up call that spurs the Kremlin to elevate economic priorities.

This commentary originally appeared on The Hill on March 6, 2020. Commentary gives RAND researchers a platform to convey insights based on their professional expertise and often on their peer-reviewed research and analysis.