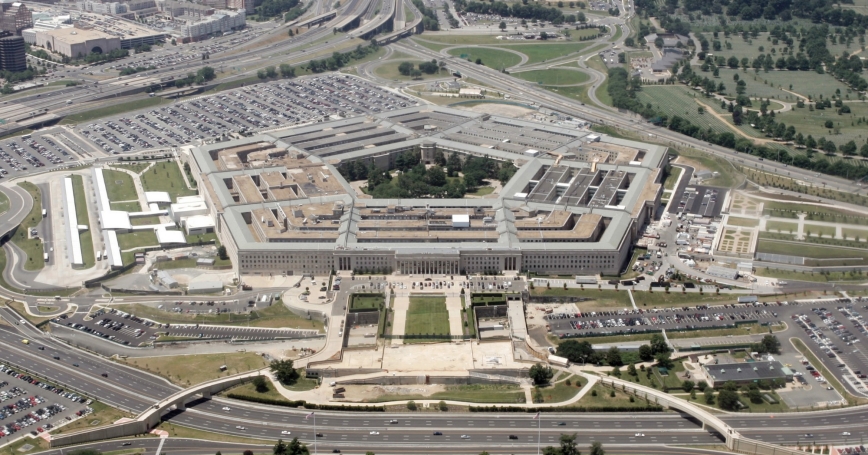 The COVID-19 pandemic is already taking a dramatic toll on the U.S. economy as businesses are shuttered, interstate commerce is restricted, and both domestic and global supply chains are disrupted. We anticipate that this could have significant medium-term implications for the defense budget and that there will be a need for the U.S. Department of Defense (DoD) to find efficiencies that are of at least the same magnitude as the recent sequestration.

Estimates vary widely regarding what COVID-19 could cost the U.S. economy, which totaled $21.4 trillion in 2019. At the higher end, a recent McKinsey analysis (PDF) suggests (in one of their more negative scenarios) that a return to even pre-crisis GDP levels might not occur until 2023. Under these conditions, and assuming that the U.S. economy would have grown at its pre-crisis rate without COVID-19, the economic losses could total as high as $19 trillion over 10 years. At the lower end, more optimistic estimates from JPMorgan assume a steep decline in the first and second quarters of calendar-year 2020, but then a strong rebound to the economy beginning in July 2020, which can be described as a “V-shaped” trajectory. The cumulative economic losses in even this relatively rosy scenario could total roughly $11 trillion over 10 years. Both estimates assume that the growth rate is robust once the initial downturn is over, returning to its pre-crisis growth rate, as it did after the 2008-2009 Great Recession.

Yet, there is reason to believe that both these estimates may be too optimistic. Historical analysis (PDF) suggests that pandemics can have adverse macroeconomic effects that last decades, and some economists are worried that recovery might be slower than current estimates suggest. Indeed, there is great uncertainty over the medium-term costs of the increasingly draconian restrictions on domestic and international movement that have disrupted global commerce, a core driver of economic growth for decades. In addition, the $2 trillion relief bill will expand total U.S. debt by nearly 10 percent, which was already $23.4 trillion at the onset of the crisis, putting defense and other government expenditures under increased pressure.

Beyond macroeconomic effects, the COVID-19 crisis has required expenditures beyond any recent experience for testing and treatment, and there will undoubtedly be severe pressure to overhaul the health care system to prepare for future pandemics. Since the economic crisis is a fallout of a health crisis, this call is likely to be persuasive. And this economic impact has been felt by such a broad swath of individuals and businesses that a “Phase Four” stimulus is already being mooted, which could further ratchet up the debt and claims to resources.

This is a daunting prospect, but what does it imply for defense spending, which totaled $676 billion in the federal fiscal year 2019? To begin with, some simple math can frame the scale of the concern for defense planners. If one assumes that the defense budget as a portion of GDP is held fixed at its current level—3.2 percent—the macro estimates above would result in available resources for the DoD that are $350 to $600 billion lower than current plans over the next 10 years. As a comparison, total cuts to the DoD under the Budget Control Act of 2011, which was enacted as part of the Congressional response to the ballooning deficit resulting from the Great Recession and the resulting economic stimulus packages (PDF), were somewhere closer to $500 billion (PDF) over ten years (though initially projected to be closer to $1 trillion, all in nominal terms). In this simple view, the potential losses to DoD from COVID-19 would be roughly comparable to a second sequestration. And while the Great Recession was unprecedented in modern U.S. history, most indicators suggest that the economic fallout from COVID-19 will be worse.

And there are reasons to see a sequestration-level impact as a lower bound. Far from remaining constant, the DoD budget was already projected to fall as a share of GDP from almost 3.2 percent in 2019 to 2.8 percent in 2030. Furthermore, the COVID-19 pandemic might spur the movement of production out of China, including production of inputs into U.S. defense articles. The scale of this effect is uncertain since there is not sufficient information about how many of the thousands of products that go into U.S. defense articles originate in China or other countries. Even so, with production shifts, DoD procurement and sustainment costs could rise because China is the low-cost producer for many of these items. As production costs rise, so will the final price to the DoD. Therefore, even if the budget were to hold constant, the ability to purchase defense items is likely to fall. Scenarios only become worse if one considers compounded effects from pandemic-related economic slowing and additional stimulus costs.

If looming cuts to DoD seem inevitable, their timing is less clear. Historically, cuts to national security spending have lagged in challenging economic times, and in fact, the Budget Control Act that kicked off the recent sequestration was not signed until the United States had substantially recovered from the Great Recession. In addition, every presidential election year elevates uncertainty regarding the defense budget, since election outcomes can change policy.

While COVID-19 might drive a reprioritization away from the DoD in the medium and long term, the U.S. military is likely to be seen as vital to the crisis response.

Moreover, while COVID-19 very well might drive a reprioritization away from the DoD in the medium and long term, the U.S. military is likely to be seen as vital to the crisis response. The metaphor of fighting a war has been used repeatedly in regard to COVID-19. And the U.S. military has been or potentially could be used directly to combat the crisis, such as using bases for quarantine and naval hospital ships to deal with the increased demand for care, building temporary hospital facilities, and maintaining order if need be. Many states have already activated the National Guard.

Foreign militaries are already playing similar roles, and the DoD made critical contributions in the past to fight Ebola in Africa. The crisis has also seen an escalation in tension between the United States and China. While this has been limited to rhetorical warfare so far, an argument could be made that this is not the time to ease the country's vigilance on the security front. More broadly, the United States has shown both a remarkable willingness (and ability) to defer or moderate fiscal reckoning through assumption of debt and the inclination to preserve national security spending in lieu of other priorities. All these factors are likely to work in favor of shielding defense spending to some degree and for some period.

But, in our view, it seems very likely that the cuts are coming. As with the Budget Control Act (PDF), these reductions could be an opportunity for the DoD to make needed changes and reforms, but only if they can be executed thoughtfully and appropriately. In this regard, the Budget Control Act also provides a cautionary tale of what can go wrong if there is not adequate planning and preparation, as the “salami slice” cuts of sequestration (which mandated across-the-board cuts that would impact programs of all types, essential or not, if agreement on reductions could not be achieved) could have been avoided.

But those trade-offs will not be easy ones to make. DoD leadership could start with a serious planning and analysis process now to prioritize spending, identify efficiencies, and make further hard choices regarding cuts in anticipation of a coming fiscal reality. By doing so, it may be able to use this looming exercise in austerity to shape and preserve U.S. capabilities.

Daniel Egel is an economist, Howard J. Shatz is a senior economist, Krishna B. Kumar is director of international research, and Ted Harshberger is vice president and director of Project AIR FORCE at the nonprofit, nonpartisan RAND Corporation.

This commentary originally appeared on RealClearDefense on April 7, 2020. Commentary gives RAND researchers a platform to convey insights based on their professional expertise and often on their peer-reviewed research and analysis.