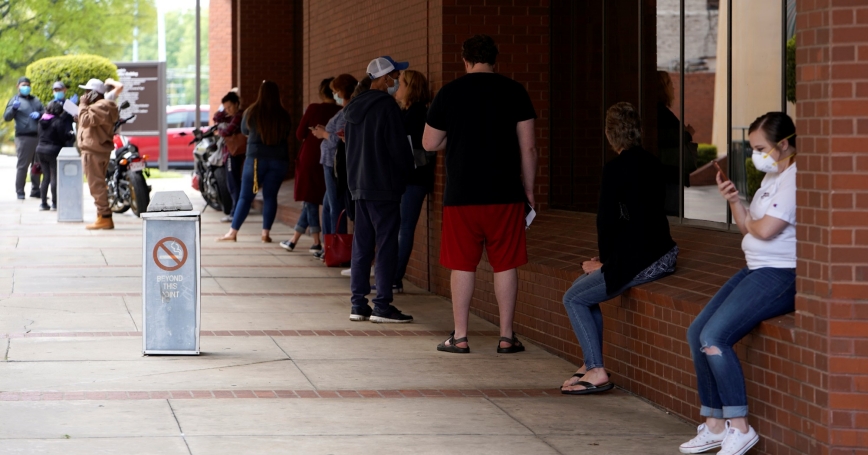 People wait in line to file for unemployment following an outbreak of COVID-19 at an Arkansas Workforce Center in Fort Smith, Arkansas, April 6, 2020

More than 10 million Americans filed for unemployment insurance in March as businesses shut their doors in response to the COVID-19 pandemic. The stay-at-home orders now covering most of the country could, economists project, idle 20 percent or more of the workforce in the weeks ahead.

Washington responded to this catastrophe with a $2-trillion stimulus package that included expanding unemployment benefits. The problem is, the antiquated unemployment insurance program is full of gaps and rules that could still leave unemployed people out in the cold.

In normal times, only about 28 percent of unemployed Americans receive unemployment benefits—either because they quit their job (and aren't eligible) or they don't apply. That rate ticks up during recessions, when more eligible, laid-off workers apply. Yet only about 40 percent got benefits at the peak of the 2008–09 recession.

The new stimulus package expands unemployment insurance to cover workers not normally eligible, such as gig workers and freelancers, as well as individuals who are not able to work due to COVID-19. It provides an additional $600 a week for four months to supplement state unemployment checks and extends the duration of benefits by 13 weeks from the typical 26 weeks.

These are welcome measures to tide people over, but they're temporary fixes that don't address the structural problems that will continue to plague unemployment benefit programs after the infusion of cash runs out.

Unemployment insurance is funded by each state through employer taxes that are set aside in a trust fund. Workers are eligible for benefits only if they meet minimum requirements for length of employment and earnings, lost their job through no fault of their own (they didn't quit or get fired for cause), and are currently looking for work. An eligible worker can receive checks for up to half their former wages for as long as 26 weeks, paid out from the trust fund.

Since its creation in 1935, unemployment insurance has been neglected to the point of obsolescence.

This sounds straightforward enough. But in fact, states and employers have incentive to prevent laid-off workers from receiving unemployment benefits. The tax on employers is paid on each worker. The tax is also “experience rated,” meaning that a company with a lot of layoffs ends up paying a higher tax to cover its remaining employees. And if a lot of workers in a state seek unemployment insurance all at once, and the trust fund runs dry, then taxes on all employers can increase during a recession—clearly a bad outcome.

While the stimulus package increases benefits, it left many crucial questions about eligibility—which are determined by the states—unanswered. For example, can workers who have to drop down to part-time to take care of children whose schools have closed receive benefits? If a worker is sick but can't get tested to confirm the illness is COVID-19, would that person receive benefits? States are likely to answer differently, resulting in very different access to, or levels of, benefits depending on where you live.

It's already clear that these state programs are unprepared to process benefit claims from the huge flood of workers now affected by coronavirus-related shutdowns. Websites for applications crashed in several states, including Michigan, Florida, Ohio, New York, New Jersey, and Washington, D.C.

This current crisis will force state administrators to update their systems simply to get the money through the pipeline. But it should spur state and federal leaders to move toward comprehensive reforms that would benefit both workers and businesses.

At a minimum, the program needs to be federalized into a single unemployment system. This would remove the state variations in eligibility and benefits, stop penalizing workers who move across states, and end the race-to-the-bottom among states to have lower tax rates.

Bold reform would include broader use of “work-sharing” assistance. Under this concept, a business struggling financially can apply for assistance from the unemployment trust fund to temporarily cover a portion of payroll costs. Evidence from the few firms in the United States that use it show that this approach (PDF) is both effective in preventing layoffs and popular among employers. (If a business closes or carries out layoffs, then workers get the jobless benefits directly.) At the moment, only 28 states have any type of work-sharing program.

Since its creation in 1935, unemployment insurance has been neglected to the point of obsolescence. There has been no federal reform of the program since 1976, most unemployed people do not receive benefits, the generosity of benefits has eroded over time, and trust funds have not kept up with need. The COVID-19 pandemic shows why it's crucial to strengthen this program so it can help businesses and workers ride out economic shocks beyond their control.

Kathryn A. Edwards is an associate economist at the nonprofit, nonpartisan RAND Corporation. Her research focuses on education, labor, and unemployment.

This commentary originally appeared on Los Angeles Times on April 6, 2020. Commentary gives RAND researchers a platform to convey insights based on their professional expertise and often on their peer-reviewed research and analysis.