38 Million Have Applied for Unemployment—but How Many Have Received Benefits? 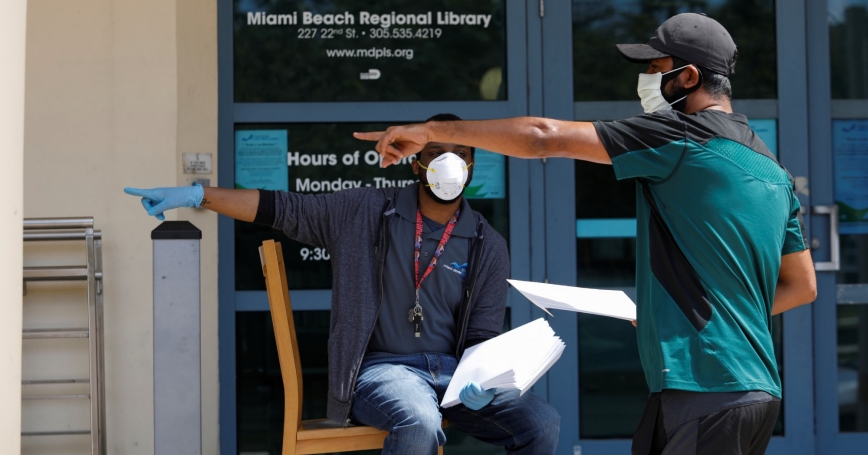 A man speaks with a library worker after receiving an unemployment form in Miami Beach, Florida, April 8, 2020

by Kathryn A. Edwards and Jeffrey B. Wenger

More than 38 million workers have applied to get Unemployment Insurance (UI) since March 15 (PDF), the onset of widespread school and business closures in the United States. The unprecedented labor market collapse overwhelmed state unemployment insurance systems and taxed their antiquated software, leading to difficulties while filing, delays in claim processing, and millions of people left waiting for their checks.

This has been the biggest stress test of the Unemployment Insurance system since it was created in the wake of the Great Depression. And UI entered the pandemic with a lot of problems, particularly related to its financing. But for the most part, UI got the job done: Cash benefits have been delivered to the vast number of workers who were laid off.

To see how UI has performed over the pandemic, we examined the number of continuing claims (current beneficiaries) in one week, and compared that to the number of initial claims (applications) over the preceding 10 weeks. (We chose 10 weeks because that is the maximum time an individual can stay on UI in Florida, the least generous state.) This is a crude estimate of what share of applicants are receiving benefits.

For example, in the first 10 weeks of 2020—the week ending Jan. 4 to March 7—146,502 workers filed an initial claim in Texas. Also as of March 7, there were 127,905 Texans receiving unemployment checks. This is a ratio of 1.1 of applicants over recipients. We call this the claims ratio.

The claims ratio is a rough approximation of how many applicants end up receiving UI. But approximating in this way has an advantage: Because this data is collected weekly by each state, we can see and compare states' progression as the crisis unfolded.

In Figure 1, we show the claims ratio for five large states (California, Texas, Florida, New York, and Michigan) and the average of the remaining 45 and the District of Columbia.

A claims ratio of 1 would mean that a state has exactly the number of current beneficiaries as 10 weeks of applicants. Even in periods of low unemployment most states have a claims ratio around 1.5 as seen in the early part of this year in Figure 1. But at the end of March, this ratio spiked as more people filed. Florida, for example, had only 35,076 continuing claims in the week ending March 28, but 345,796 initial claims over the previous 10 weeks; Florida's claims ratio was suddenly 9.85.

As states worked through the backlog and increased the number of payments going out, the ratios fell again. Most states' ratios today are still higher than they were at the start of the year, but much lower than in late March and early April. Even Florida's ratio has finally fallen, after continuing to spike longer than in other states.

The claims ratio is not a perfect or exact measure, but it does show that states have processed the historic number of claims and sent out payments.

To check if states are truly caught up, we also examined some Department of Labor statistics. Every month, states report to the Department of Labor (on what's called the 9050 form) the number of new UI recipients in their state and the length of time between a person's initial claim and their first check. Indeed, of all of the workers who started UI in March or April, 81 percent had waited two weeks or less for the first check, and 92 percent waited three weeks or less.

The foundations of the UI safety net are holding solid. The Depression-era disasters of mass hunger, foreclosures, and bankruptcies are being held at bay, at least for now, for those who are eligible.

The UI system passed this stress test. The program is delivering cash benefits that are timely and targeted to laid-off workers. The foundations of the UI safety net—near-universal worker and employer participation, published tax schedules and benefit eligibility rules, trust funds, and a federal-state partnership dating back 85 years—are holding solid. The Depression-era disasters of mass hunger, foreclosures, and bankruptcies are being held at bay, at least for now, for those who are eligible for UI.

Were news reports of significant delays and unprocessed claims wrong? No. All of the metrics we discuss here start when the claim is filed. There is no systematically collected measure of how long it took to get the claim in. Given the tech issues, it could have taken days or weeks to file in the first place. Moreover, despite three weeks being an acceptable speed for the Department of Labor (PDF), that is probably not fast enough for workers. A recent analysis of 6 million families' spending (PDF) found that 48 percent of families didn't have enough cash savings to weather an income dip for 2.8 weeks.

Frustration directed at UI might also be partly misplaced. Many unemployed workers are not eligible for regular UI benefits, but only for the newly created Pandemic Unemployment Assistance. PUA targets the self-employed, gig workers, and independent contractors, in addition to workers with insufficient earnings. Workers who are affected by pandemic lockdowns are told that they are “eligible for unemployment,” even if they are a contractor. These individuals are unlikely to distinguish between “regular” and “pandemic” unemployment benefits.

Many states have not even set up a system to pay out PUA funds. Twenty-three states have yet to pay a single benefit (PDF) since the program was created by the CARES Act in late March. As we enter June, that means many affected workers have been waiting months for relief. Some portion of those may have filed a UI claim, not realizing that they needed to wait until they could file a PUA claim.

Unemployment Insurance may need substantial reform to its application process (as well as its financing structure as we discussed previously), but it weathered this disaster. Pandemic Unemployment Assistance, the new program intended for workers who are not part of the employer tax base, has not. If the old policy adage is, “Don't wait till a hurricane to fix the roof,” from this crisis we should add: “Don't try to build a house during a hurricane, either.”

Kathryn Anne Edwards is an associate economist at the nonprofit, nonpartisan RAND Corporation and a professor at the Pardee RAND Graduate School. Jeffrey Wenger is a senior policy researcher at RAND.