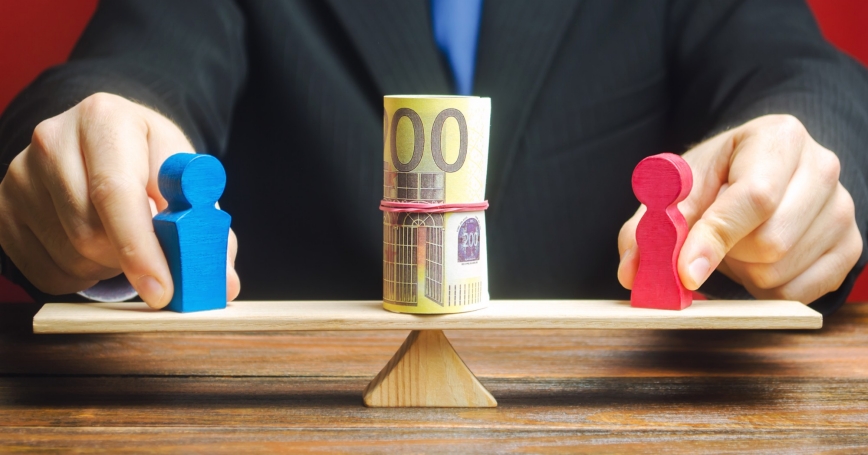 More than 60 years ago, the EU introduced the principle of equal pay for equal work for men and women. Yet, a gender pay gap—the difference between the average gross hourly earnings of female and male employees—persists in most countries. In some EU member states, it has been found that the gap even widened in recent years as a result of the 2008 financial crisis.

Reasons for the persistent gap are complex and interrelated. It has been argued that women may make different career choices than men, albeit their preferences are affected by structural factors that shape their choice regarding occupation and/or working pattern.

'Occupational segregation' is another well-cited factor as a cause of pay inequality. Women are overrepresented in low-paying sectors, such as teaching and nursing. Yet, in traditionally male dominated sectors where wages tend to be higher, women are still often lower paid, despite similar levels of education and experience.

How work is valued in societies also plays a role. Women are more likely to perform work that is unpaid or low paid, including housework and caring responsibilities. Lastly, there are stereotypes about gender roles and 'women's place in society' that can hinder women's progression.

One proposed solution to address the gender pay gap is pay transparency, and in 2014, a European Commission (EC) Recommendation (PDF) encouraged member states to implement measures to aid pay transparency. These include: the right to request information on pay levels; issuing gender pay reports; conducting gender pay audits; and discussing the issue of equal pay during collective bargaining.

Women are more likely to perform work that is unpaid or low paid, including housework and caring responsibilities.

The analysis found that arguments for pay transparency measures include their potential to help identify and address unjustified or discriminatory pay gaps. Availability of information on pay can enable employees and/or their representatives to take legal action and demand equal pay. Similarly, pay transparency can support employers to review pay at their organisation and take steps to remedy any apparent discrepancies.

Most of the arguments against pay transparency measures include employer concerns about how the sharing of pay information may lead to tension and conflict among staff. For many, money is still a private and sensitive issue. In addition, requiring the publishing of pay reports will place additional administrative burden on employers—with an estimated additional cost of up to 2,028 EUR per organisation per year for larger employers (PDF).

It is perhaps unsurprising that making pay-transparency measures 'binding', rather than relying on recommendations would help their greater implementation.

If we look at the key facets for effective pay transparency, it is perhaps unsurprising that making pay-transparency measures 'binding', rather than relying on recommendations would help their greater implementation. That being said, the ability to enforce the measures, such as mandatory reporting, is crucial.

Further, member states need to ensure that a relevant enforcement and monitoring agency has the necessary resources and mandate to ensure employers comply with any binding measures. Also, both employers and employees need to be made aware that measures exist.

To help ease employer concerns, our study shows that there should be support to help reporting, including training sessions, and guidance on how to develop clear action plans for when pay discrepancies are detected. Such support will help ensure that binding pay-transparency measures can achieve their greatest impact. It is important that measures are not seen as a tick-box exercise, but rather as a meaningful process to bring about long-desired change.

On a positive note, though adoption of the 2014 EC recommendations by member states has been limited, some notable examples exist. Out of 31 European countries (EU28 plus Norway, Lichtenstein, and Iceland), 10 countries implemented at least one core pay transparency measure. Finland and France have both implemented three out of four recommended measures. Both countries have adopted a pay reporting duty, a pay auditing duty and collective bargaining measures. In addition, Finland has also implemented an employee's right to obtain pay information.

It is hoped that this year's planned legislative proposal for binding pay-transparency measures by the EC, as part of a new European Gender Strategy, will help support implementation, and accordingly make progress towards ensuring equal pay for equal work. However, to ensure success and achieve the greatest impact, sufficient support should be given to both employers and employees.

Michaela Bruckmayer is an analyst in the area of home affairs and social policy at RAND Europe.

This commentary originally appeared on Encompass on May 12, 2020. Commentary gives RAND researchers a platform to convey insights based on their professional expertise and often on their peer-reviewed research and analysis.