For the U.S., South Korea, and Japan, It’s the North Korean Regime, Not Kim Jong Un Per Se, That Is the Threat 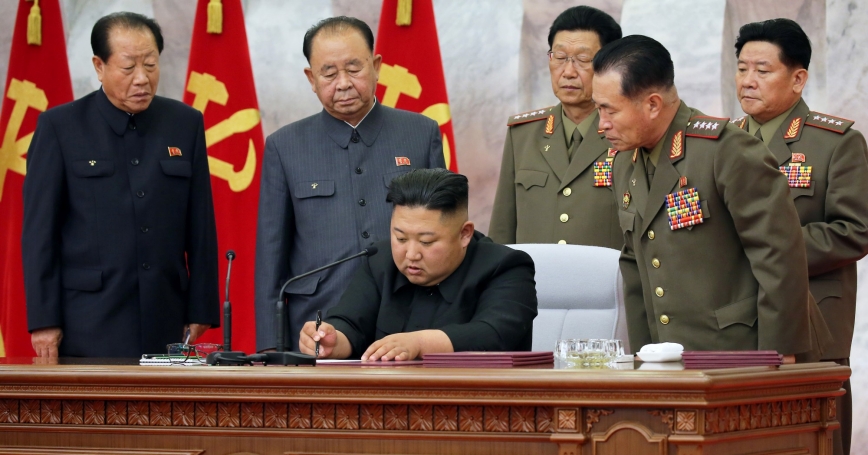 North Korean leader Kim Jong Un presides over a meeting of the Workers' Party of Korea Central Military Commission, May 24, 2020

Would Kim Jong Un's death improve U.S., South Korean, and Japanese security? Maybe not. Across two prior leadership changes, the Korean Workers' Party has remained steadfastly committed to strengthening the North's nuclear, conventional, and asymmetric military capabilities; has consistently refused to abandon the illicit activities it relies on to fund itself; and has never stopped threatening its neighbors and the United States. North Korea's advancing nuclear and other military capabilities are driving an expanded set of problems, and while Kim's sudden death might constitute a destabilizing factor for the regime—possibly even a prerequisite to positive change—the available evidence suggests the regime itself is the problem. Indeed, the heavily personalistic approach to negotiating with the North that the United States and South Korea have adopted in recent years may make diplomacy with the North even more difficult if Kim does die.

To be sure, Kim's reappearance at the ribbon-cutting ceremony of a new fertilizer production facility in Sunchon on May 1st, after having disappeared for nearly three weeks, quelled much of the speculation surrounding his health, the regime's stability, and possible succession scenarios. But since that appearance, he has not been seen again. Moreover, just two days after his May 1 appearance, the North Korean military fired multiple shots at South Korea's guard post across the demilitarized zone. And even while Kim was absent, North Korea proceeded with construction of a facility large enough to accommodate an elevated Hwasong-15 ICBM located next to an underground facility large enough to fit all known DPRK missiles and support vehicles. Over the course of seven decades, the North has cultivated a group of elites who appear primed to carry on the general line of developing the regime's WMD capabilities and other coercive tools, as well as its practice of using these to threaten its neighbors, whether Kim is there or not.

The solution for the United States, South Korea, and Japan may be continued vigilance and diplomatic coordination in preparation for a long-term period of deterrence and confrontation with Pyongyang. This could require broad-gauge trilateral cooperation, continued commitment to direct intelligence-sharing agreements, and a return to regular military exercises so as to maintain a high degree of readiness and deterrence. It could also include a coordinated “maximum pressure 2.0” (PDF) campaign targeting the regime's funding and legitimacy in tandem with other allies and partners. It may also be important to reach out to regime-linked elites and prepare them for unification, signaling to them that their safety and security will be guaranteed and may even have meaningful roles to play in a reunified Korea should they abandon the Kim family regime. Messages by Washington and Tokyo reassuring Seoul that both capitals remain committed to and support Southern-led unification as the “solving long division” approach may also be important.

The solution for the United States, South Korea, and Japan may be continued vigilance and diplomatic coordination in preparation for a long-term period of deterrence and confrontation with Pyongyang.

While the security interests and threat perceptions of the United States (PDF), Japan, and South Korea are not identical, they are nonetheless similar in key respects, most notably their shared values as liberal, democratic, rule of law capitalist countries, and their exposure to the North Korea threat. For decades, North Korea's strategy has been to intimidate Seoul and Tokyo while striving to reduce Washington's regional influence. Sometimes Pyongyang has employed threats, and at other times peace offensives designed to lull Washington, Seoul and Tokyo into dropping their guard, but its ultimate goal has always been to fuel the withdrawal of U.S. troops from South Korea and Japan, break the alliances, and achieve unification on Pyongyang's terms.

Disturbingly, despite its shaky economic base, the North's ability to exercise coercion has been growing more sophisticated in recent years. America and its allies in Northeast Asia are exposed not only to North Korea's nuclear (PDF), chemical, and biological weapons (PDF); its ballistic and cruise missiles; and its sizable, if largely, technologically outdated conventional capabilities, but also to the regime's diversifying portfolio of gray zone tools for intelligence-gathering, coercion, and cybercrime. In addition, the DPRK's illicit trafficking in narcotics (PDF), arms, slavery, prostitution, counterfeiting, online bank heists (PDF), and other cyber-enabled economic warfare, oil bunkering (PDF), and sanctions evasion (PDF) greatly erode the safety and security of the region and the world.

Resolution of the issues posed by North Korea, not only its pursuit of WMD, ballistic missiles, and cyberattacks but also its domestic human rights abuses amounting to crimes against humanity, could require coordination between the United States and its regional allies, backstopped by steady, purposeful diplomacy. Now more than ever, it could be critical for Washington, Seoul and Tokyo to send a clear message to Pyongyang that they stand side-by-side.

Scott W. Harold is a senior political scientist and Soo Kim is a policy analyst at the nonprofit, nonpartisan RAND Corporation.

This commentary originally appeared on RealClearDefense on June 6, 2020. Commentary gives RAND researchers a platform to convey insights based on their professional expertise and often on their peer-reviewed research and analysis.