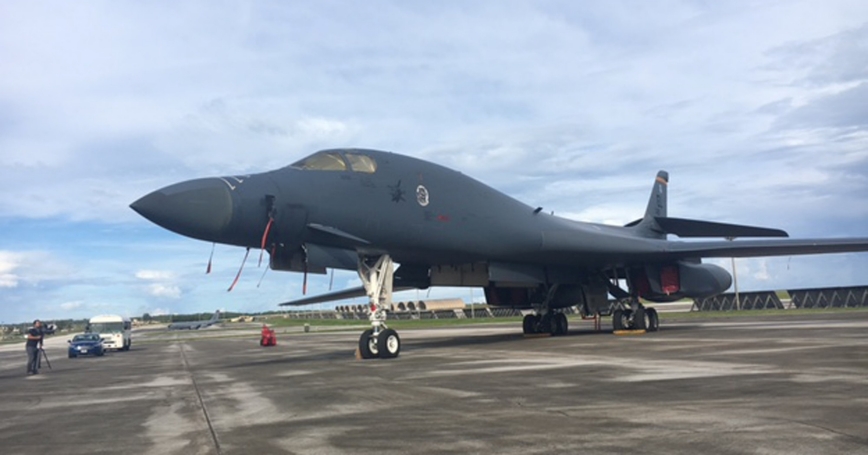 A U.S. military B1B Lancer on the tarmac of Andersen Air Force base, on the island of Guam, August 17, 2017

Since 2004, the United States Air Force has maintained a rotational bomber force to the U.S. territory of Guam. This was referred to as the Continuous Bomber Presence (CBP) and included U.S. strategic bombers the B-52, B-1, and B-2. The purpose of the CBP was twofold. One was to provide a rapid strike and extended deterrence capability. Another was to reassure regional allies through a visible U.S. commitment. From 2004 until April 2020, the CBP meant there was always some number of U.S. bombers in the Indo-Pacific region, signaling to both allies and adversaries alike that the United States was committed to defending its interests by being capable of striking quickly should a contingency arise.

From April, the CBP ended, replaced with what is termed Dynamic Force Employment (DFE), a concept introduced in the 2018 National Defense Strategy. Rather than a permanent presence, under DFE these bombers are housed back in the United States but make periodic deployments to the region. This challenges adversaries because the United States can fly these bombers to the region from multiple locations when it chooses, making these bomber flights more operationally unpredictable.

The move has caused some concern in Japan. One concern is that it signals a reduced U.S. commitment to regional security, particularly the defense of Japan. Another concern is that it reduces America's deterrent ability because the move of these critical strategic assets means the United States no longer can rapidly respond to a regional conflict. While both concerns are understandable, they may be mistaken. The transition to DFE does not negate the original objectives behind the CBP. In fact, it could work to strengthen them.

Given that Chinese and North Korean missiles have grown in both range and accuracy, the move of bombers to the United States increases U.S. resiliency by keeping these critical U.S. assets safer than if they remained on Guam.

Although the DFE is not a permanent bomber presence, it may not be detrimental to Japan's security. While the optics of losing a permanent bomber presence in the region causes concern, the argument that the geographic distance reduces U.S. deterrent capabilities is overblown. Not only does the United States retain other assets that continue to hold adversaries at risk, such as nuclear submarines and its missile arsenal, making bomber flights to the region more operationally unpredictable forces U.S. adversaries to expend more resources to track and respond to different flights originating from different locations, thereby increasing operational advantages. Importantly, given that Chinese and North Korean missiles have grown in both range and accuracy, the move of bombers to the United States increases U.S. resiliency by keeping these critical U.S. assets safer than if they remained on Guam.

Similarly, the argument that DFE signals a reduction of U.S. commitment to Japan's defense may also be mistaken. Although the permanent bomber presence is gone, U.S. presence in Japan remains the largest of all regional allies. In Japan alone, over 50,000 forward deployed military personnel representing all four services of the U.S. military are present. This includes sizable U.S. units, such as the Navy's Seventh Fleet and America's only foreign deployed Carrier Strike Group, the U.S. Marine Corps' III Marine Expeditionary Force, and the Air Force's 18th Wing, that service's largest combat wing.

Often overlooked is the fact that the U.S. bomber fleet is much more than what was on Guam, consisting of B-52s, B-1s and B-2s, allowing the United States to respond to global events anywhere. Within the first two weeks after CBP ended alone, the United States already returned to the region three times, first with B-1s to train with over a dozen Japanese aircraft, then B-1Bs to fly over the South China Sea, and then a deployment of four B-1Bs and about 200 airmen back to Guam on a short bomber task force rotation.

Looking ahead, the shift to CBP could serve to enhance interoperability between the U.S. Air Force and the Air Self-Defense Force, something in Japan's interest. Because of the unpredictable rotations, bombers coming to the region will need to coordinate with allies' forces. This will provide increased opportunities to train together, which bolsters the alliance's collective ability to be operationally unpredictable. What is more, should the United States occasionally deploy its non-nuclear bombers to Japan, such as Kadena or Yokota, not only would American and Japanese forces be able to work together in new ways, the optic of U.S. bombers temporarily deployed to Japan could signal a new sign of commitment from the United States

Taken together, while the removal of a permanent bomber presence in the region has caused some in Japan to worry, U.S. commitment to Japan's defense shows no sign of changing nor does America's deterrent capability.

A version of this commentary originally appeared on yomiuri.co.jp on June 23, 2020.