An Uncertain Future for Jail Reform in Los Angeles 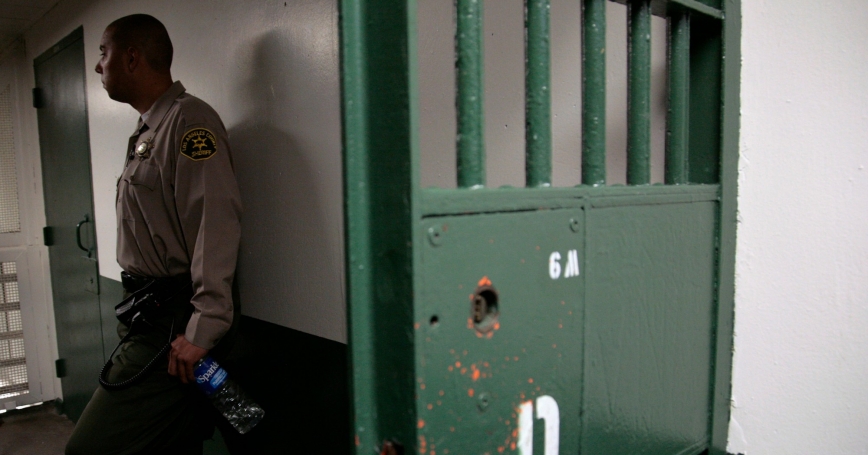 As a step toward reform, the county planned to replace Men's Central Jail with a Consolidated Correctional Treatment Facility—colloquially referred to as a “mental health jail”—designed to treat more than 3,800 incarcerated individuals with mental health concerns. Over the course of 2019, however, priorities for this population shifted towards diversion and community-based alternatives (e.g., behavioral health treatment, supportive housing, other psychosocial services), culminating in the decision to cancel the contract (PDF) to replace the jail in August 2019. And on July 7, 2020, the Los Angeles County Board of Supervisors voted to close Men's Central Jail (PDF) within a year.

Though the culture in Los Angeles has been shifting towards community-based alternatives to incarceration over the past several years, the events that have taken place in the first half of 2020 have accelerated these efforts. In early March, Measure R was passed by an overwhelming majority, compelling the county to investigate community-based behavioral health treatment options for this population and what resources would be needed to support them.

When Los Angeles County became the epicenter of the COVID-19 outbreak in California, the life-saving potential of diversion became even more clear. Since March, the county has reduced the jail population (PDF), marking the first time in at least 15 years that the number of people incarcerated in the jail system has been below the BSCC-established capacity. And in the midst of the pandemic, the death of George Floyd caused the entire nation to confront the reality long known to criminal justice researchers and community advocates: People of color, specifically African Americans, are disproportionately at risk (PDF) for involvement in the justice system. Together with the commitment of the Board of Supervisors and other county and community-based stakeholders, these events may provide the catalyst needed to permanently reduce the jail population in the county.

As many as 68 percent of the Los Angeles County jail mental health population might be appropriate candidates for diversion to community-based services.

But how to safely accomplish this task? There are several promising avenues already in place in the county. A RAND study published earlier this year found that as many as 68 percent of the jail mental health population might be appropriate candidates for diversion to community-based services operated by the Office of Diversion and Reentry (ODR). As highlighted in another recent RAND commentary, the ODR Supportive Housing program has been associated with high rates of stable housing and low rates of felony re-arrests. But a key limiting factor has been funding and the capacity of existing programs. Though the Board of Supervisors moved to make a substantial investment (PDF) in their work, a long-term plan may be needed.

The Alternatives to Incarceration Workgroup has also had an important role in identifying opportunities for reform. Using a racial equity lens, this group developed a set of 114 recommendations for ways Los Angeles County can better implement a “care first” approach. In a motion passed in early March (PDF), the Board of Supervisors established a county office to coordinate and oversee the implementation of these recommendations. However, many of their recommendations will require substantial funding to expand existing services and address gaps.

Though the county is taking steps to provide “care first, jail last,” there remain gaps in services. First, ODR diversion programs are designed to serve individuals with serious mental health disorders. The jail mental health population now comprises roughly half of the overall jail population (PDF), but some of those individuals are not clinically eligible for ODR diversion programs because their mental health needs are less severe. However, other existing programs in Los Angeles may provide avenues of support for these individuals. The Los Angeles City Attorney's Office operates the Los Angeles Diversion, Outreach, and Opportunities for Recovery (LA DOOR) program, a Proposition 47–funded program that includes a pre-booking diversion pathway to treatment for individuals with an eligible misdemeanor drug or drug-related arrest. A preliminary analysis found that participants were less likely to be reconvicted (PDF).

Similarly, the Los Angeles Mayor's Office operates the Proposition 47–funded Project imPACT, which provides comprehensive employment, behavioral health, and legal services to individuals with a history of behavioral health concerns who were recently involved in the justice system. Early data has demonstrated significant demand for this program (PDF), and many sites have implemented waitlists because demand exceeds capacity. These types of programs may also address racial disparities in the jail system: Both Proposition 47–funded programs focus their efforts in historically disadvantaged areas of Los Angeles. However, Proposition 47 grant funding is time-limited, further highlighting the need for sustainable funding for such programs.

Community-based options for individuals with felony charges are especially needed, as they constitute most of the Los Angeles County jail population.

There is also a need to consider options that serve individuals who do not necessarily have diagnosed mental health concerns, which remains a substantial proportion of the jail population. Law Enforcement Assisted Diversion (LEAD) is a pre-booking diversion pilot program developed with the community to address low-level drug and prostitution crimes. Adapted from a program in Seattle, a recent evaluation (PDF) in Los Angeles suggested that participants were satisfied with the program. However, outcome data were not yet available, so it remains to be seen if this will be an effective option. Community-based options for individuals with felony charges are especially needed, as they constitute most of the county jail population.

There is strong momentum in Los Angeles County to do this difficult work of criminal justice reform. Recent events have made all too clear that our current system is unsustainable and inequitable. The county is positioned to make tremendous steps forward—but it will take considerable investments of time and resources, and a commitment to implementing and evaluating the effectiveness of new strategies along the way.