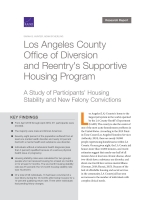 A Study of Participants' Housing Stability and New Felony Convictions

by Sarah B. Hunter, Adam Scherling

Los Angeles County is home to the largest jail system in the world and has one of the most acute homelessness problems in the United States, with nearly 59,000 people experiencing homelessness there. Because of the lack of affordable housing and social services in the community, LA County jail has seen an increase in the number of individuals with complex clinical needs. A recent initiative designed to tackle these issues is the Department of Health Services' Office of Diversion and Reentry's supportive housing program, which provides housing coupled with case management. This report presents early interim findings about this program. Researchers found six-month and 12-month housing stability rates of 91 percent and 74 percent, respectively. Of the cohort that had been placed in housing more than a year ago, 14 percent had new felony convictions.

Felony rates were measured for the 12-month cohort

The research described in this report was funded by Brilliant Corners and conducted by the Justice Policy Program within RAND Social and Economic Well-Being.