Arts and Cultural Workers Are Especially Vulnerable to the Pandemic 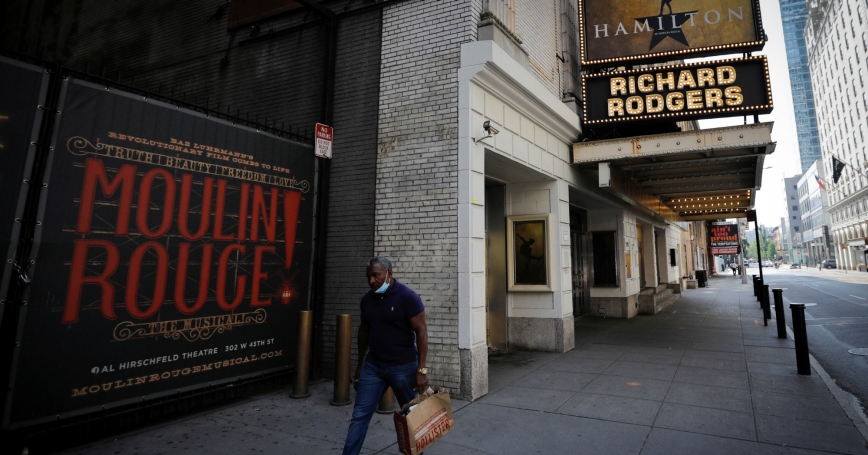 A man walks past the shuttered Richard Rodgers Theatre, home of the popular musical “Hamilton,” in New York, July 2, 2020

It may not be obvious at first why the challenges that COVID-19 presents to arts and cultural workers—those involved in the visual arts, movies, skilled craftsman, literature, performing arts, and recorded music—should matter. First, arts and cultural workers occupy a unique place in our society. It's estimated that more than five million workers (PDF) are employed in arts and cultural industries and that these industries contributed nearly $880 billion to the U.S. economy in 2017 (as compared to the sports industry which contributed just under $70 billion). Second, the arts provide opportunities for both individual and community innovation, enjoyment, learning, and healing. For example, elements within the Department of Defense and the Department of Veterans Affairs recognize the value of art and music therapy; through a successful partnership between those agencies and the National Endowment of the Arts called Creative Forces, music and art are used as therapeutic prescriptions to help those who have suffered brain and other injuries.

Moreover, after a societal shock such as a natural disaster or public health crisis, reopening the doors of a major community cultural anchor, or engaging in cultural traditions can provide both a sense of normalcy and a short-term boost to the community's psychological well-being. During this pandemic individuals have sought to incorporate cultural traditions into life events, whether it be a funeral or a college graduation. These opportunities, which can occur in the home, schools, museums and performance venues, streets, protests, online—simply everywhere—forge bonds that have been shown to lead to greater community engagement and investment—moreso even than some other community services.

Members of the arts industry are especially vulnerable to economic shocks, such as those created by the pandemic.

Yet members of the arts industry are especially vulnerable to economic shocks, such as those created by the pandemic. As discussed in a forthcoming RAND report about the arts in Puerto Rico after Hurricane Maria, although the decentralized and largely unregulated nature of the cultural sector is a driving force behind its diversity, it is also one reason for its vulnerability. Arts industry analysts Crossick & Kaszynska (2016) note that, “It is an error to see publicly-funded and commercial arts and culture as separate worlds, one dependent on the taxpayer and the other on the market. They operate as part of a complex ecology of talent, finance, content, and ideas (PDF). The nonprofit cultural sector contributes research and development for commercial cultural providers, while public funding enables them to take risks with creative content and ideas.” Visual artists and museums, and performers and performance venues mutually depend on each other, for example. RAND's work in Puerto Rico exposed many vulnerabilities that arts and performers have in obtaining aid either because they don't meet criteria for government funding or are difficult to connect with other limited or decentralized funding sources.

To highlight why artists are more vulnerable than many other occupations, we turned to pre-pandemic employment data. We analyzed historical data from the Current Population Survey (CPS) for three groupings of arts industry workers—performing artists (directors, musicians, composers, actors, dancers, choreographers, and other kinds of performers), who generally rely on venues for opportunities; nonperforming artists (visual artists, designers, writers) who may more readily work independently; and architects, librarians, and archival specialists who are more likely to be salaried. Moreover, artists and performers often work two jobs, frequently in the retail and food industries, so these occupations were included for comparison.

Further, since the Great Recession performing artists have experienced higher unemployment rates than have other occupations, as shown in Figure 2. Artist-heavy service and retail occupations also had higher unemployment rates, although architects, librarians, archivists, and nonperforming artists had lower unemployment rates than others. Additionally, results from a 2013 survey of artists and performers indicated that 43 percent did not have health insurance, largely because they could not afford it. This is more than double the estimate for the general population, which at that time was estimated to be 17 percent. And arts and cultural workers, who likely have less of a financial cushion to fall back on, have been hard-hit by the current pandemic, with many expecting these industries to take longer to fully reopen.

For all of the above reasons, workers in the arts and cultural industries could be especially vulnerable to shocks such as the current pandemic. As America reopens and decides its future, the vulnerabilities, as well as the intrinsic and cascading benefits that the arts and cultural industries offer individually and to communities should be recognized.

Susan Resetar is a senior operations researcher, James Marrone is an associate economist, and Daniel Schwam is a quantitative analyst at the nonprofit, nonpartisan RAND Corporation.