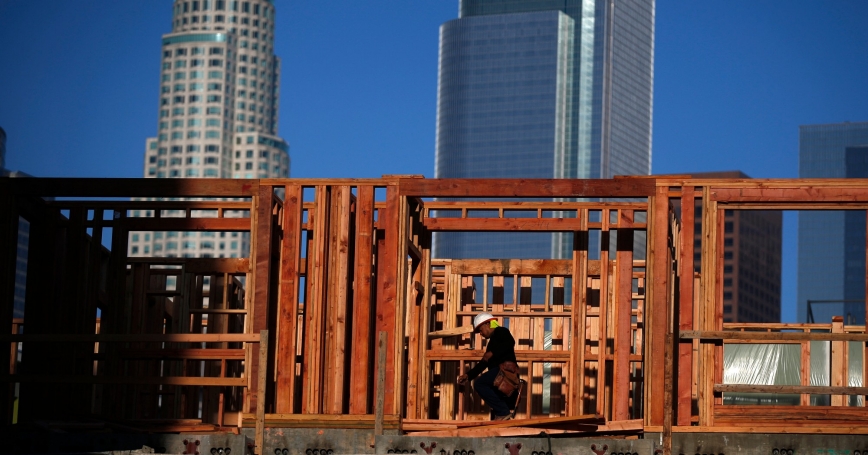 A construction worker on a building site in downtown Los Angeles, California, March 10, 2015

The COVID-19 pandemic has led to an estimated 175,000 business closures this spring, and the delinquency rate on commercial mortgage–backed securities has increased more than fivefold in recent months.

According to a recent RAND survey, an estimated 40 percent of those remaining employed are working from home full-time, and employers are signaling that this may become the new normal.

All of this suggests a significant decline in commercial real estate demand. This could be regarded as yet another negative economic effect of the pandemic, but it could also represent a once-in-a-lifetime opportunity to reallocate portions of the built environment away from declining commercial demand and toward the urgent demand for affordable housing.

Attempts to “upzone” areas zoned for single-family use—a designation covering 75 percent of residential land in Los Angeles— have repeatedly failed in the Legislature. One of the few bright spots in housing policy has been the city's 20-year-old “adaptive reuse” program, which played an important role in the creation of more than 14,000 new housing units in downtown Los Angeles (PDF), as well as in other parts of the city.

A recent regional plan developed by the Southern California Association of Governments has called for adding more than 1 million new housing units—primarily in jobs-rich coastal areas in L.A. and Orange counties—in order to reduce sprawl and improve quality of life in Southern California.

Developing new policies and incentives required to foster timely conversion of underutilized commercial and retail space to much-needed residential use may be one of the best opportunities Angelenos, and Californians more broadly, will have to meet this goal.

To give a concrete example of the potential role that repurposing commercial properties might be able to play, the West L.A. Community Plan Area (PDF) represents 1.74 percent of the land in the city of Los Angeles, but holds about 10 percent of the total office space in all of Los Angeles County (PDF); and employment in this area comprises a high proportion of jobs that are amenable to remote work.

“Commercial real estate” comprises a wide range of property types and classes, and how decreased demand may play out across offices, retail spaces, and other properties such as hotels, is not yet clear. But many such properties are modern buildings in good repair with many necessary amenities for residential use already in place, such as parking and modern utility services.

This could be a once-in-a-lifetime opportunity to reallocate portions of the built environment away from declining commercial demand and toward the urgent demand for affordable housing.

Repurposing such properties may sidestep some of the factors that have contributed to a near-doubling of the cost of building housing in California in less than 20 years, a trend that—coupled with years of legal challenges—has increasingly led to even small-scale affordable housing projects becoming financially infeasible before ground is ever broken.

Project Roomkey—the state program to house homeless persons at high risk of acquiring COVID-19—includes a clause allowing the state to negotiate with owners to subsequently purchase these properties and convert them permanently to housing for the homeless. The extent to which this provision is utilized may provide evidence on the feasibility of this concept. Recently proposed state legislation, Assembly Bill 3107, would ease restrictions on rezoning underutilized commercial properties for residential use.

Some form of state or local subsidization (PDF) may be required to effectively incentivize such a reallocation. Fully realizing such an opportunity would also likely require significant federal fiscal aid, as both dedicated funding sources like L.A. County's Measure H, and broader state and local revenues have been dramatically affected by the economic shocks from the pandemic, though the likelihood of any such aid remains unclear.

Whatever the new housing mix arising from such an effort, recent research suggests that even new market rate or affordable housing eases pressure on the broader housing market. Both the exodus of residents seeking more affordable housing and the relentless increase in the number of individuals experiencing homelessness in Southern California highlight the importance of exploring this potentially historic opportunity to address California's housing crisis.

Jason Ward is an associate economist at the nonprofit, nonpartisan RAND Corporation.

This commentary originally appeared on CalMatters on July 18, 2020. Commentary gives RAND researchers a platform to convey insights based on their professional expertise and often on their peer-reviewed research and analysis.