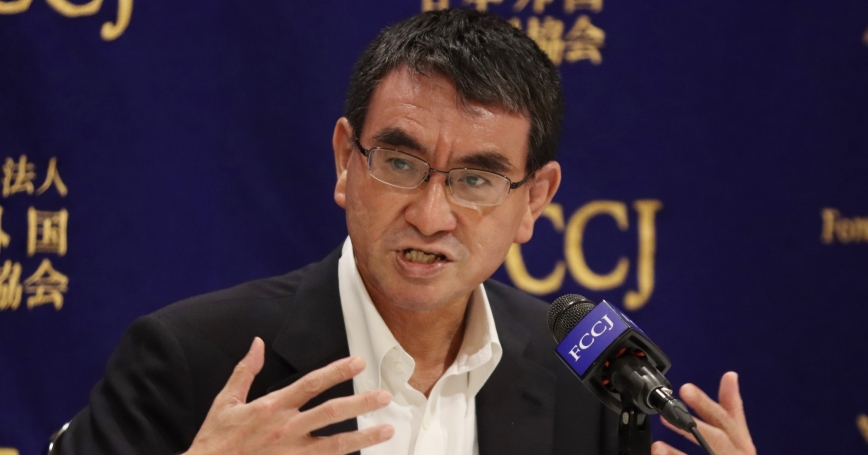 Last month, Japan canceled its planned deployment of two Aegis Ashore ballistic missile defense systems. The news came as a surprise to many in the national security establishments of both Washington and Tokyo. Japan's decision is understandable—the effort was expensive and faced technical issues—but that does not negate the problems it could pose for Japanese security and its relationship with the United States. Like past tensions the alliance has faced, however, this too will likely pass. Whether the alliance is stronger or weaker because of it, though, remains to be seen.

Defense Minister Taro Kono, who announced Tokyo's initial decision to suspend the project, said Japan had two primary concerns: cost and technical issues. Japan was not confident that it could prevent the rocket boosters from the interceptor missiles from hitting local communities after separation from the interceptor. According to Kono, although software modifications could ensure correct booster separation, attempted modifications have not been successful, which means that the missile hardware would likely need to be redesigned. Such efforts would, in turn, cost $1.8 billion and take roughly a decade. Considering the cost and time involved, Kono said, there was no choice but to suspend the plan, which the National Security Council eventually approved, effectively canceling the system.

It is true that the expense of the Aegis missile project had grown beyond what Japan had signed on to. The system was initially estimated to cost $2.15 billion to purchase, operate, and maintain over its 30-year operating period, but the total had eventually ballooned to $4.1 billion—even before the $1.8 billion in additional costs. On top of that, Japan's defense budget will likely see cuts due to the government's response to the COVID-19 pandemic, putting an extra premium on resources. From that perspective, a quick exit strategy is understandable.

There were also political considerations, although these should not be overstated. There has been opposition in the communities slated to host the two systems. In Akita, for example, opposition was so strong over concerns of the health effects of electromagnetic waves emitted by the radar (and anger at the way the geographical survey to select the hosting site was conducted) that the Ministry of Defense was forced to abandon its preferred site in May and search for another. Although there was opposition in Yamaguchi, too, it was never as strong. It is possible that Prime Minister Shinzo Abe wants to avoid further damage to his administration at a time of falling approval ratings. This is relevant because, if the technological issues are as severe as Tokyo says and it had been leaked that the government knew of these dangers and did nothing, there would be an even steeper political price to pay.

These concerns, however, do not negate the still-relevant operational considerations that Japan had given for why the system was necessary in the first place. Japan's ballistic missile defense system consists of two layers. The sea-based tier, managed by the Maritime Self-Defense Force, consists of seven—soon to be eight—Aegis-equipped destroyers with interceptors that can target incoming missiles. The ground-based tier, managed by the Air Self-Defense Force, consists of fire units using the Patriot Advanced Capability-3 interceptor dispersed throughout Japan, intended to destroy missiles should they leak through the first layer of defense.

Beyond the boost to Japan's defenses, the missile system was also designed to benefit the alliance. It would have helped protect the over 50,000 U.S. armed forces personnel in Japan and enhanced U.S. homeland defense capabilities.

Aegis Ashore was meant to add support to the Aegis-equipped destroyers. Under the plan agreed to in 2017, Japan planned to buy two systems from the United States and deploy them by 2025 in Yamaguchi and Akita prefectures. Beyond the boost to Japan's defenses, the missile system was also designed to benefit the alliance. It would have helped protect the over 50,000 U.S. armed forces personnel in Japan and enhanced (PDF) U.S. homeland defense capabilities. It also would have helped free up U.S. Aegis-equipped destroyers otherwise tied to defending Japan so they could be sent to other parts of the region, if needed, without degrading Japan's defense.

The Abe administration argued (PDF) that this new layer of defense was critical because of North Korea's arsenal of several hundred ballistic missiles and because the current system severely stresses Japan's Aegis destroyers. Furthermore, rough seas or rough weather, as well as refueling or routine maintenance of the destroyers, meant that the Aegis-equipped destroyers were not able perform their ballistic missile defense functions 24 hours a day, 365 days of the year. Aegis Ashore would address the shortfalls.

All that remains true today, and one could argue that some things have gotten worse. North Korea has become increasingly provocative. As Japan's 2019 Defense of Japan (PDF) suggests, with North Korea possessing ballistic missiles capable of reaching every part of Japan, “military trends in North Korea continue to pose a serious and imminent threat to the security of Japan.” And along with having to cope with tight budgets, the Maritime Self-Defense Force is struggling with low recruitment rates—and thus limited crew—which means that pressures on the Aegis-equipped destroyers are not easing. Even if the force could recruit enough new sailors to fill more ships, at roughly $2 billion per ship, this is not a cheaper alternative. Nor does it solve the coverage gaps problem. The head of Japan's Maritime Self-Defense Force, Adm. Hiroshi Yamamura, said that if the solution is not Aegis Ashore, it is still necessary to introduce some new ballistic missile defense capability that is not influenced by the weather and the climate.

Tokyo has thus far failed to clarify an alternative to Aegis Ashore; instead, it has moved the discussion into a broader examination of Japan's deterrent capabilities, including the ability to strike enemy bases readying missiles to strike Japan.

As important as it is to understand the factors driving Japan's decision, it is also important to clarify what Tokyo's cancellation does not represent. Critics of Abe will likely argue that the cancellation of the project indicates a divergence in strategic objectives between the United States and Japan, but the cancellation is better characterized as simply a different approach toward a shared objective. Even if Japan seeks to acquire a different weapons system for its defensive needs, it has maintained a highly consistent North Korea policy, even as the United States' own policy has changed.

Similarly, Tokyo's suspension is not a repudiation of U.S. President Donald Trump. Although it is true that Tokyo decided on the system in 2017, Japan did not do so to accommodate Trump, as some have argued; rather, the idea had been percolating in Tokyo long before Trump became president early that year. Japan's 2013 National Defense Program Guidelines (PDF), in reference to the country's ballistic missile defense system, spoke of the need to “enhance readiness, simultaneous engagement capability, and sustainable response capability to strengthen the capability to protect the entire territory.” This “sustainable response capability” referred to a ground-based tier of missile defense. In turn, the Ministry of Defense began to research the Aegis Ashore and THAAD systems. Japan has been interested in Aegis Ashore since 2014, after the United States began developing the capability for two sites in Europe. By the time of Trump's call to buy more American-made products and weapons, Japan had already decided.

Just because Japan's decision may be understandable does not mean that the alliance will avoid damage.

Just because Japan's decision may be understandable does not mean that the alliance will avoid damage. If something as necessary as Aegis Ashore could fall apart, there are likely to be questions about Japan's commitment to other systems it has declared an interest in acquiring. In addition to purchasing U.S. F-35 fighter jets, Long-Range Anti-Ship Missiles, and Joint Air-to-Surface Standoff Missiles-Extreme Range, Japan has committed itself to developing a future fighter, disruptive capabilities (PDF) in space and cybersecurity, and a host of standoff missile capabilities (PDF). All of these are costly endeavors but ones that promise to modernize the alliance through new roles and missions. If Japan could pull out of Aegis Ashore, despite how critical that system was supposed to be to Japan's security, there could be concerns whether it will do the same for any of these programs, particularly because they are costly and will likely involve technological issues as well.

Meanwhile, Japan has already paid about $112 million of its contract for Aegis, but there will need to be discussions about what to do with unfulfilled contracts worth 70 percent of its estimated total cost procurements and whether Japan is liable for any of the remaining costs or penalized for breaking the contract. The United States is unlikely to be in a generous mood. Trump has already criticized Japan as being a free-rider that does not contribute enough to the alliance, and he reportedly wants Japan to quadruple the amount it pays for keeping U.S. soldiers on its territory.

The allies are left facing a challenging situation, but it may not be a proxy for the overall health of the alliance, because this one issue does not define it. Bilateral disagreements are not new. In the 1980s, trade and currency issues took center stage. In the late 1980s and early 1990s, it was about the development of a future fighter, and it's been about ways to get Japan to put “boots on the ground” and “show the flag” since the turn of the 21st century. And for a good two-and-a-half decades, they have struggled with relocating the Marine Corps Air Station Futenma. Aegis Ashore is yet another challenge, but it's one that can be overcome as long as it does not consume the partners.

Perhaps the cancellation could not have come at a better time. Whether it be burden-sharing discussions under Trump or the opportunity that a new U.S. administration could represent after the upcoming election, the allies may have a historic opportunity to discuss new ways to collaborate and explore new roles and missions that consider both the regional security environment and domestic realities. This could include integrated air and missile defense or even ground-based intermediate-range missiles. At a minimum, they could discuss ways to improve U.S. foreign military sales to Japan to prevent a similar situation from occurring again, something Kono is reportedly interested in.

The Aegis Ashore cancellation seems to be a challenge to the alliance, but it's not a mortal blow. As much as Japan's concerns seem understandable and the impacts on the alliance real, it is nothing the two countries cannot overcome.

Jeffrey W. Hornung is a political scientist at the RAND Corporation.

This commentary originally appeared on Foreign Policy on July 2, 2020. Commentary gives RAND researchers a platform to convey insights based on their professional expertise and often on their peer-reviewed research and analysis.