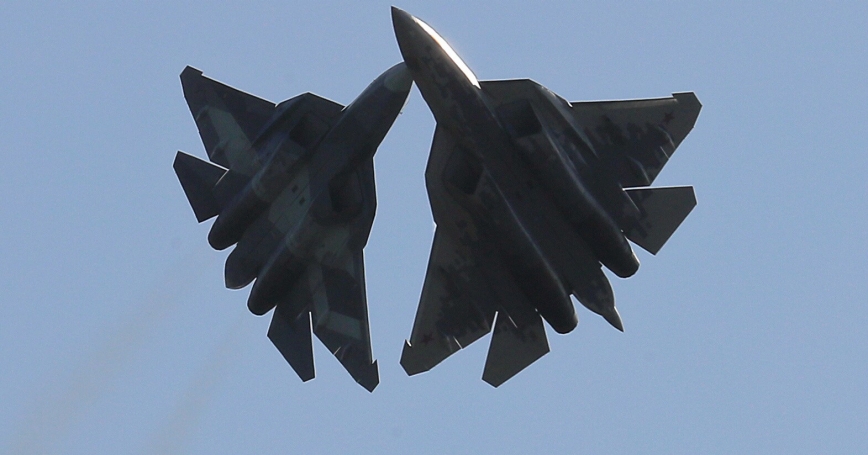 by Ryan Bauer and Peter A. Wilson

The Su-57 aircraft has been in development since 2002 and is considered a key part of Russia's arms export industry as a fifth-generation fighter to compete with rival systems such as America's F-35 aircraft. The jet made its first flight approximately ten years ago, yet the widely advertised system has not yet been incorporated into the Russian military or any foreign militaries despite Russian promises to the contrary. There have been a series of recent test flights of the aircraft, including the deployment of a handful of prototypes to Syria in 2018 and 2019. Apparently the jets did not conduct any live firing or strike missions, while the Kremlin has claimed otherwise without offering evidence. Furthermore, development challenges and recent crashes have continued to delay the advanced fighter bomber's initial operational capability (IOC) until the mid-2020s at the earliest. The head of the Sukhoi Aviation, which develops the Su-57, resigned earlier this year because of development delays, including the December 2019 crash of the first “operational” Su-57 aircraft during a test flight.

The RAND Corporation, a nonprofit research organization, has assembled and analyzed open-source information on Russian arms sales around the globe at the request of the U.S. government to support foreign assistance training and awareness. One of the repeated findings from the analysis is the variety of challenges and setbacks that the Russian Su-57 jet has experienced, decreasing the likelihood of Russia exporting the aircraft before the mid-2020s.

A primary challenge is the development of the jet's second-generation engine. Though designed to incorporate the second-generation Izdeliye 30 engine, current prototypes have been outfitted with an older engine. According to a former aircraft engineer for Sukhoi who later became an independent aviation expert, the 76 “operational” models that the Russian Federation Air Force is expected to receive during the 2020s will not have the intended second-generation engine. It remains unclear when the second-generation engine will be completed. Aside from the advanced engine, the Su-57 is touted as having an all azimuth, a.k.a. 360 degree sensing capacity similar to the F-35. After all, what makes a fifth-generation fighter bomber is not just its low observable (LO) features but also the advanced all azimuth sensor suite. At the present time, only the F-35 has both of these features and is in mass production.

Successful development of these very advanced avionics has and will continue to be a major challenge for the Russian A&D industries. The Russian Federation's A&D industries have a legacy of unsuccessful attempts to absorb the full fruits of the post–Cold War revolution in information technology. This has been further exacerbated by Western sanctions and the divorce of Russian and Ukrainian A&D industries in this regard. Since the Crimea crisis that began in the winter of 2014, the Russian political military leadership has talked the talk about the renationalization and reform of the Russian A&D sector, but results have been modest at best.

A major part of the problem flows from the way the Russian A&D sector is financed. The big conglomerates must borrow from the Russian banking sector to finance the development of the next generation of high-technology combat vehicles, such as the Su-57 fighter bomber. These conglomerates have repeatedly gone into debt to the Russian banks after major weapon development programs have run into difficulties. From time to time the Putin regime has had to “bail-out” these industries, especially since overall defense spending has been tied to income generated by the export of oil and natural gas. That income stream was constricted during the 2015 Saudi-initiated market share war with the introduction of North American fracking energy industries. Recovery from that period of relative defense spending austerity was severely set back by the recent decline of the Russian economy that has been damaged due to drops in oil and gas prices prompted by the global economic shocks caused by the emergence of the COVID-19 pandemic.

Not surprisingly, the Russian government has sustained a robust pitch to sell its current-generation combat vehicles and gain financial support through various advanced weapon co-development projects. The marketing and co-development of the Su-57 has been a poster child of this phenomenon. India was the one country that had previously expressed interest in purchasing the aircraft and had entered into a joint development program with Russia in 2007. By 2018, however, India pulled out of the program due to continued delays in development, most notably the failure to develop a second-generation engine, as well as disagreements over the transfer of technology.

Though Russia has continued to court India, the Modi government announced plans to develop its own fifth-generation aircraft, demonstrating that it had no plans to purchase the Su-57. India has indicated that it plans to develop its engines based on French, British, and American models, given that Russia lags behind in engine technologies. This is not to say the Indian market for advanced combat vehicles and weapons has dried up for the Russians. Recently, the Russians were able to sell a relatively small number of Su-30 MKIs and MiG-29s to India, a sale prompted by the summer's violent border clashes between India and China.

Russia has continued to look for other Su-57 markets or co-development partners. These include China, Turkey, Vietnam, and Algeria. At the present time, these overtures have been unsuccessful. In December 2019, there were various reports indicating that Algeria had signed a contract for 12 Su-57 jets, which would make Algeria the first export customer. Several sources, however, have expressed skepticism about whether the deal will occur. One reason is that given how far behind Sukhoi is in delivering Su-57s to the Russian military, Russia will likely struggle to meet the 2025 deadline for Algeria. Another reason is that Algerian law requires imported military aircraft to first be flight-tested in the country, which according to Tom Cooper, an expert on Russian warplanes, is something the Russians would never allow.

Despite continued Russian efforts to sell the aircraft, it is unlikely that a fully developed and full production–ready Su-57 will be available for sale before the late 2020s. Even fully developed, the Su-57 will likely have attributes of another modernized fourth-generation heavy fighter bomber, the F-15EX, lacking in the LO features of the F-35 but having an all azimuth sensing capacity of that fifth-generation combat aircraft.

Ryan Bauer is a defense analyst and Peter Wilson is an adjunct senior international defense researcher at the nonprofit, nonpartisan RAND Corporation.