The West's Role in Belarus 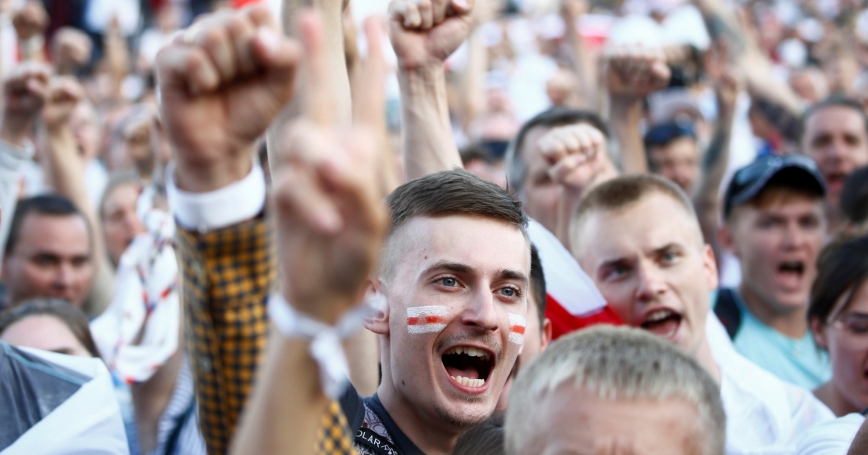 Protestors gather in Minsk, Belarus, to demand the resignation of President Alexander Lukashenko and the release of political prisoners, August 16, 2020

Belarus may be moving to the verge of political change. Mass demonstrations and labor strikes protesting President Alexander Lukashenko's re-election, which is widely seen as fraudulent, along with police brutality are powering the shift. Whether any transition is peaceful and improves governance may depend in part on the West. If allowed to help, the West might facilitate dialogue and a stable power transfer while defusing geopolitical risks.

Despite belonging to the European Union's Eastern Partnership, Belarus has had strained ties with the EU, although the relationship improved some in 2016 when Brussels lifted most sanctions following the release of some political prisoners. Relations with the United States have similarly been troubled. Last February, however, U.S. Secretary of State Michael Pompeo visited Belarus, and the first U.S. ambassador to Belarus in over a decade has been nominated.

Brussels and Washington have reacted cautiously to the Aug. 9 election and the street protests that followed. Pompeo and EU foreign policy chief Josep Borrell said the election was “not free and fair,” and the European Union has called on the regime to begin a dialogue with civil society.

The European Union has announced plans for renewed sanctions. This is understandable. Perhaps more helpful will be offers such as the one made by neighboring Latvia, Lithuania, and Poland to mediate a reduction of tensions.

Past governance crises in Central and Eastern Europe offer possible insights into how the West might facilitate a peaceful solution in Belarus.

In 2003 in Georgia, after a flawed parliamentary vote, tens of thousands of protesters filled the streets. President Eduard Shevardnadze resigned. The European Union, United States, and United Nations provided technical aid, such as to rectify voter lists and train exit pollsters. These contributions and international monitoring helped ensure the integrity of a presidential election.

Past governance crises in Central and Eastern Europe offer possible insights into how the West might facilitate a peaceful solution in Belarus.

A decade later, Ukrainian President Viktor Yanukovych's refusal to sign a promised EU Association Agreement led thousands to occupy Maidan Square during the cold winter of 2013-2014. When police killed about a hundred protesters, EU leaders rushed to Kyiv and mediated a settlement. The next day, Yanukovych fled Kyiv.

Another successful EU mediation—this time in strong partnership with the United States —occurred in 2001 in Macedonia (now North Macedonia). An ethnic Albanian insurgency stopped short of exploding into a full-scale civil war thanks to the U.S. and EU-brokered Ohrid Framework Agreement. It expanded the linguistic and cultural rights of ethnic Albanian citizens.

In Belarus, it is uncertain whether the authorities would allow the West to play such roles. To lessen Moscow's concerns, the West could emphasize that its only aim is a peaceful power transition, not a geopolitical realignment. Whereas in Georgia and Ukraine the opposition sought pro-Western affiliations, such as EU Association Agreements or NATO membership, this seems not to be the case in Belarus. An end to autocratic corruption need not bring about a geopolitical shift.

A more democratic, Eastern Slavic state on Russia's border might be difficult for the Kremlin to accept, but the European Union and the United States could make clear that any improvement in relations with Moscow would depend on its not intervening coercively in Belarus. This risk became evident on August 15 when Lukashenko and Russian President Vladimir Putin voiced confidence that the crisis would “be resolved soon.”

How could the West support peaceful change in Belarus?

The West might consider calling for a new presidential election in Belarus with credible monitoring. The West and the Organization for Security and Co-operation in Europe could provide technical assistance to help ensure fair campaigning and honest balloting. After an election, the Belarusian authorities and opposition might ask for further help, avoiding Yanukovych's mistake in waiting too long to request mediation support. For now, police repression may clear the streets. But longer-term political stability—and Lukashenko's personal future—may require a government that enjoys more popular support.

Lukashenko may not welcome Western mediation unless he fears being overthrown, a greater risk if security forces begin to defect. If and when asked, the West could be ready immediately to assist with free and fair elections and the formation of a legitimate government.

William Courtney is an adjunct senior fellow at the nonprofit, nonpartisan RAND Corporation and was U.S. ambassador to Kazakhstan, Georgia, and a U.S.-Soviet commission to implement the Threshold Test Ban Treaty. Michael Haltzel, Chairman of the Transatlantic Leadership Network and Senior Fellow at the Foreign Policy Institute at Johns Hopkins University, is former European Policy Advisor to then-Senator Joseph R. Biden, Jr.

This commentary originally appeared on RealClearWorld on August 17, 2020. Commentary gives RAND researchers a platform to convey insights based on their professional expertise and often on their peer-reviewed research and analysis.