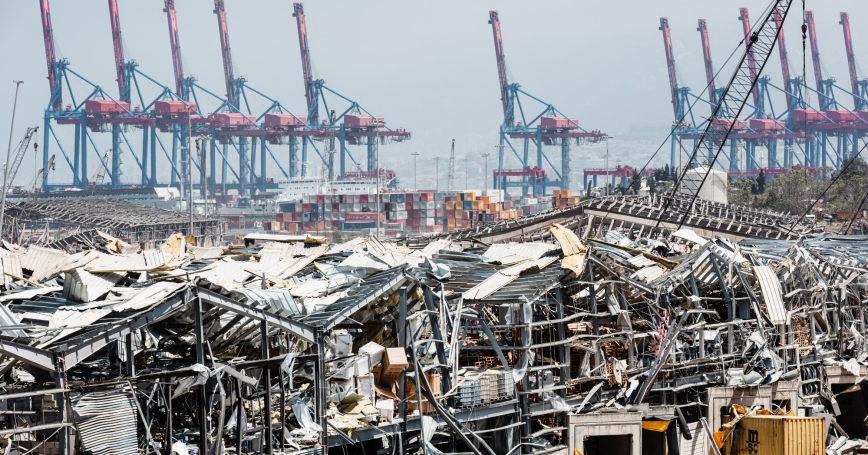 The port of Beirut and its construction cranes, destroyed by an explosion of ammonium nitrate on August 4, 2020

by Krishna B. Kumar and Louay Constant

A recent explosion in Beirut captured headlines all over the world. It killed hundreds of residents and injured thousands more, and it has led to yet another round of calls for political and economic reforms in Lebanon. While such reforms are long overdue, it is hard to see how Lebanon, on its own, can repair the problems deepened by this latest catastrophe. A donor conference organized by French President Emmanuel Macron drew pledges for much-needed short-term assistance. But sustained global investment is also necessary if the country is to recover over the long run.

The situation in Lebanon was already explosive. Its economy was in shambles, corruption was endemic, job opportunities were scarce, and a brain drain (PDF) sapped the country of skill and human resources. Government profligacy in an era of low growth and capital inflows left the country's national debt at 150% of its GDP, the third highest in the world. All the while, Lebanon's confessional system, which divides the exercise of power among the country's religious groups, has furthered the damage of sectarian divides.

Add to this volatile mix an influx of 1.5 million Syrian refugees—the largest number (PDF) per capita in the world—and social tensions and economic anxiety had already escalated in recent years. When we visited Lebanon to study how labor markets were coping with the refugee influx, a U.S. official we interviewed likened the situation to a population the size of Texas suddenly moving into the United States. The Lebanese experts we spoke with saw the country providing a “public good” to the world by hosting this many refugees. They hoped the global community would, in return, invest in Lebanese industries and infrastructure to create jobs and growth. Indeed, despite tensions including sharpened competition for jobs, there were no systematic reprisals against refugees, and all 150 firms we surveyed had employed Syrian refugees.

Protests broke out in October 2019 with demands (PDF) for political, social, and economic change resulting in the resignation of then-Prime Minister Saad Hariri. They were quelled only by the powerful force of a pandemic that wrought even more economic devastation. The IMF forecast that COVID-19 would cause Lebanon's economy to shrink by 12% in 2020. Poverty has increased, with three-quarters of the population estimated to need aid. With these crises dealing one blow after another, the explosion effectively delivered a knockout punch. Predictably, Lebanese have reacted with anger, bringing down another prime minister and the entire government.

Few disagree with the need for economic and political reforms. European officials we spoke with warned it was highly unlikely that private investment would arrive without substantive reforms, and even assistance conditional on improvements over time was unrealistic. Given the current frustration and anger directed at politicians of all stripes, sudden and sweeping structural changes may well be possible. However, it is difficult to see how an economy in such dire straits that has been so badly managed for years can reform overnight and fulfill the preconditions set by global investors and multilateral institutions.

Governance and economic performance are intertwined, and investors and donors do need to maintain the pressure for meaningful reforms. However, the global community also needs to think creatively about getting much-needed investment to Lebanon with speed, perhaps learning from past experiences in managing aid (PDF). For instance, a neutral, multinational body could be set up in cooperation with the next Lebanese government to oversee the disbursement of foreign funds and ensure accountability and speedy implementation. Such a body would increase the confidence of global investors, who could provide investment in tranches upon completion of implementation milestones.

The foundations of such a mechanism exists within CEDRE, the $11 billion pledge made in Paris in 2018, which is linked to Lebanon's capital investment plan. Recommendations (PDF) for improvement include conducting public investment assessments, strengthening the High Council for Privatization and Partnership to oversee public-private partnerships, and establishing (PDF) a National Anti-Corruption Commission, which has already been legislated. A cautionary note (PDF) emphasizes the limited capacity of the government to enact some of the tougher tenets of CEDRE, and pressures ministries to pass laws and enact policies rather than pursue changes requiring multi-party consensus. Our study also identified a need for building government capacity in planning and execution—a need made more acute by recent developments.

Waiting for Lebanon to completely reform before investing in the country could push it further into chaos, increasing regional instability. As we discovered, the need for livelihoods is as urgent as humanitarian assistance, which investment in large scale infrastructure and construction projects can provide. The people of a country that provided a timely and much-needed public good, to the world as well as to the refugees they host, might deserve the same kind of support from the global community.

Krishna B. Kumar is director of international research at the nonprofit, nonpartisan RAND Corporation and director of the Initiative for Global Human Progress at the Pardee RAND Graduate School. Louay Constant is a senior policy researcher at RAND.

This commentary originally appeared on RealClearWorld on September 1, 2020. Commentary gives RAND researchers a platform to convey insights based on their professional expertise and often on their peer-reviewed research and analysis.