For Leisure and Hospitality, Weak Recovery Still Looks Like Recession 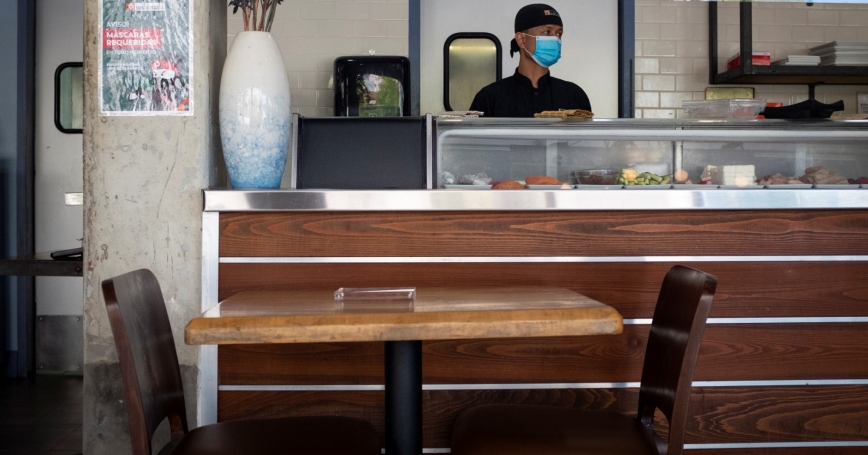 A sushi chef waits for diners as Miami-Dade county allows indoor servicing in restaurants after easing some lockdown measures in Miami, Florida, August 31, 2020

September marks a full six months since the recession began in February—so long that many emergency assistance measures have already expired. After the eviction ban under the CARES Act ended in July, the CDC put a moratorium on them as a public health measure through the end of 2020. The USDA, which had ended a free school lunch program, was pressured into restarting it. The president responded to the expired $600 weekly add-on to unemployment benefits with an executive order.

These moves are all evidence that there are many families still in need of aid. Even as the U.S. unemployment rate dropped from a peak 14.7 percent to 8.4 percent, the recovery is still leaving many workers behind.

By most measures, the workers hardest hit by the pandemic shutdowns were those in the leisure and hospitality sector, which includes arts, entertainment, recreation, accommodation, and food services. Back in February there were 16.8 million of these jobs; by April, there were only 8.5 million. Among all of the people working in leisure and hospitality in March, 47 percent were not working at all in April.

Among all of the people working in leisure and hospitality in March, 47 percent were not working at all in April.

Leisure and hospitality jobs are also some of the lowest paid out there. The leisure half—who work in arts, entertainment, and recreation—post median hourly wages of $13.88. The hospitality half, who work in accommodation and food services, have median wages of $11.64. Working full-time at such wages pays just $24,500 to $29,000 a year.

Further, these jobs—still affected by government social distancing regulations—are not all likely to come back before the pandemic truly ends.

In a previous post, I explained that there are two large segments within the unemployed. If someone is furloughed (PDF) or thinks they will be recalled within six months to their past job, they are on temporary layoff. Individuals on permanent layoff, on the other hand, are looking for a new job. Transitions between these statuses can be telling.

For example, as seen in Figure 1, just 53 percent of the workers employed in leisure in hospitality in March were still working in April. Of the 47 percent no longer working, about half (23 percent) were on temporary layoff—twice as many as those who'd been permanently laid off (12 percent). Another 12 percent left the labor force. This was far worse than the average in all other industries, where 82 percent of people working in March were still employed in April.

Although the data do not support a single analysis for the entire spring–summer, we can observe month-to-month transitions.

Figure 2 shows what happened to that segment of workers in leisure in hospitality who thought they'd be called back to work. For example, 19.6% of those on temporary layoff in April were working again in May—much lower than the 35.5% figure in other industries. That trend held through June and July. At the same time, in each successive month, a higher share of temporary layoff workers transitioned to permanent layoff overall, and it was worse in leisure and hospitality than other industries.

Even as the unemployment rate dropped in August, that month saw several large layoff announcements from leisure and hospitality employers. These companies are bracing for a prolonged downturn with much reduced demand (or allowance) for travel, conference services, and in-person entertainment. That means many jobs that were “on hold” in the belief that the pandemic would pass are now disappearing for good.

Some will suggest that these workers just need to change industries to find a new job. But keep in mind that other industries are not recovered either—they just did not decline as sharply as leisure and hospitality. The economy still had 11.5 million fewer jobs in August than it did in February at the start of the recession.

Across all industries, the number of workers on temporary layoff is decreasing monthly—but, in part, that's because so many workers downgrade their status to permanent layoff or to out of the labor force (see Figure 3).

In July we crossed an unfortunate benchmark: more workers downgraded their employment status than upgraded. Of the 7.6 million people on temporary layoff in June, by July 2.4 million were working, but 1.7 million moved to permanent layoff and 1.2 million left the labor force.

Inferring what such transitions mean for the economy is difficult. There's no precedent for comparison. It could be that because these categorizations come from a survey questionnaire, they aren't economically meaningful. However, they do cohere with the outlook of firms that are permanently laying off furloughed employees, as well as the sentiment captured in the most recent outlook from the regional governors of the Federal Reserve system.

This recession has already proven to be steep. These transitions may be indicating that it will not be short.