The Islamic State in Afghanistan Is Down, but Not Out 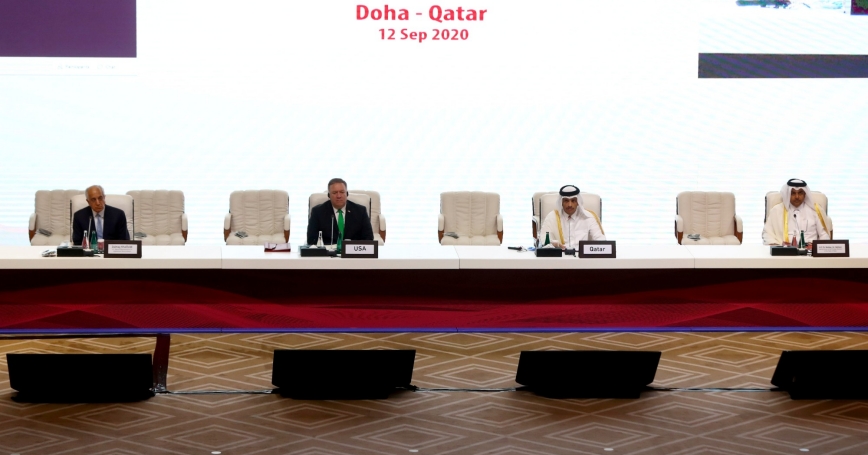 Nineteen years after the al Qaida attacks of September 11, 2001, American troops are still deployed in Afghanistan, although there is a new enemy that has emerged to destabilize the country—the Islamic State Khorasan Province, or ISKP. The Afghan Taliban—the same group that provided sanctuary to al Qaida as it planned the 9/11 attacks—is on the verge of entering into a power-sharing agreement with the Afghan government in a peace deal facilitated by the United States.

President Donald Trump seems determined to draw down the U.S. troop presence in Afghanistan to 4,000 soldiers before the presidential election in November. This would be the lowest number of U.S. troops in Afghanistan at any point since just after 9/11. The United States seems to be holding out hope that a potential peace deal will stabilize Afghanistan. Giving the Taliban partial responsibility in governing the country, so the logic goes, could make the group a vested stakeholder in ensuring a de-escalation of violence.

But ISKP remains a growing concern, even as U.S. CENTCOM Commander Gen. Frank McKenzie is optimistic that the Taliban will actually help the United States fight against ISKP militants, as he said back in mid-March. But even as the Taliban and ISKP might remain adversaries, for the United States to rely on the Taliban—a group it has fought against for the past two decades—as a cornerstone of its counterterrorism strategy, seems a risky proposition.

ISKP in Afghanistan is strongest in the strategically important provinces of Nangarhar and Kunar. However, it still retains the capability to conduct spectacular attacks with near impunity in the Afghan capital, as demonstrated by the deadly attack on a Kabul maternity ward in May. To be sure, ISKP has experienced its share of struggles, including the recent killing of its top judge, Abdullah Orakzai.

Even as the Taliban and ISKP might remain adversaries, for the United States to rely on the Taliban as a cornerstone of its counterterrorism strategy seems a risky proposition.

Yet despite having its leadership targeted and losing territory, ISKP has proven remarkably resilient. Even without large swaths of territory under its control, ISKP retains a robust cadre of committed fighters dispersed throughout Afghanistan. As demonstrated by the Kabul maternity ward attack and an attack that same day on the funeral of a local police commander in Nangarhar, cells of ISKP fighters have the operational space and resources necessary to launch devastating terrorist attacks. Last month, ISKP militants attacked a prison in Jalalabad in an effort to free imprisoned fighters, in one of the group's deadliest attacks to date, in addition to being sophisticated from a tactical and planning perspective.

Following the arrest of Aslam Farooqi, also known as Mawlawi Abdullah Orakzai, ISKP appointed Shahab al-Muhajir as its new regional chief, and many suspect he arranged the prison break to signal an increased operational tempo for the group moving forward. Indeed, in a 20-minute-long audio tape, ISKP spokesman Sultan Aziz Azzam claimed the attack on behalf of the group, provided details of the operation, and stated that al-Muhajir planned and supervised the attack. “The attack is also part of an effort by the newly-appointed ISKP leader to prove his credentials, boost the morale of his followers and possibly attract new recruits,” according to Dawood Azami of the BBC.

However, to revive ISKP fully, its new leader will have to overcome a litany of challenges. In neighboring Pakistan, the revival of the Tehrik-i-Taliban (TTP), or Pakistani Taliban, adds another potential enemy to what is already a growing list that includes the Afghan Taliban, al Qaida, and the Haqqani Network.

A recent report (PDF) of the United Nations Security Council suggested that more TTP members could join ISKP as a result of shifting political dynamics in Afghanistan, although TTP leadership quickly refuted this claim. Through a press release, the TTP used strong language against ISKP, accusing the jihadists of being a proxy of regional intelligence agencies. Initially a splinter group of the TTP, there are longstanding relationship between members of ISKP and the Pakistani Taliban. Since the split, the TTP supported the narratives of al Qaida and the Afghan Taliban, issuing a detailed religious verdict nullifying the legitimacy of ISIS's claims of a caliphate. Since its re-emergence under the leadership of Muhajir, ISKP has not yet claimed any attacks against the Afghan Taliban, though many suspect these attacks are forthcoming, given the historical animosities between the groups.

For its part, al Qaida in Afghanistan has sought to mostly avoid direct confrontations with ISKP. Still, the recent issues of al Qaida in the Indian Subcontinent's (AQIS) magazine Nawai Ghazwa Hind reveal that their members have played significant roles under the command of the Afghan Taliban in removing ISKP fighters from their strongholds in Nangarhar. These revelations are telling in a number of ways, particularly since peace negotiations between the United States and the Taliban have progressed, al Qaida and AQIS have tried hard to conceal their presence in Afghanistan.

Since the killing of ISIS leader Abu Bakr Baghdadi in October 2019, AQIS leadership has attempted to poach disillusioned ISKP footsoldiers no longer confident about the group's future. Cognizant of the retention challenge, ISKP recently issued a special package of general amnesty for their militants who surrendered to the Afghan government after setbacks in Nangarhar and Kunar, guiding them on how to renew their oaths. Aware of its limitations, ISKP has focused less on holding physical territory and more on spectacular attacks designed to destabilize Afghanistan and draw attention to the group, in an effort to improve morale and keep its name in the headlines. An attack earlier this week against Afghan Vice President Amrullah Saleh killed ten but failed to take out Saleh. So far, the attack has gone unclaimed, but the Taliban have denied involvement, which leaves ISKP as the only other culprit capable of conducting such a high profile attack. The attempt on Saleh's life comes at a time when the Afghan government is attempting to rejuvenate negotiations with the Taliban.

The withdrawal of U.S. troops will likely impact conditions on the ground in Afghanistan. And the presence of terrorist groups is not a reason in and of itself for the United States to maintain a permanent presence, which is neither feasible nor desirable. But depending in any significant way on the Afghan Taliban to fight ISKP seems foolhardy—American and Taliban interests might temporarily overlap in countering the Islamic State, but the Taliban is not a trustworthy partner. Unless a coherent counterterrorism strategy is laid out, ISKP will continue to recruit, mobilize, and plot new attacks. The Islamic State in Afghanistan may be down, but it's not out.

Abdul Sayed has a master's degree in political science from Lund University Sweden and works as an independent researcher. His research is on jihadism and the Af-Pak region. Colin P. Clarke is an adjunct senior political scientist at the nonprofit, nonpartisan RAND Corporation, a senior research fellow at the Soufan Center, and an assistant teaching professor at Carnegie Mellon University's Institute for Politics and Strategy

This commentary originally appeared on Newsweek on September 11, 2020. Commentary gives RAND researchers a platform to convey insights based on their professional expertise and often on their peer-reviewed research and analysis.