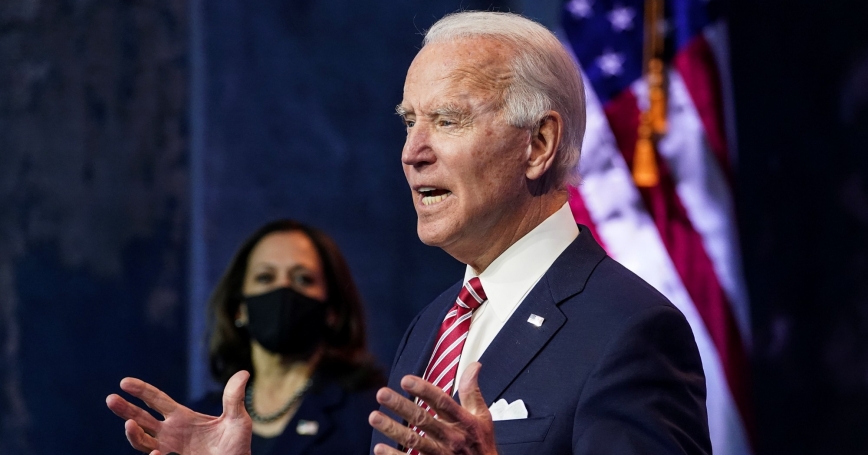 President-elect Joe Biden has been clear about his agenda: control the pandemic, recover economic stability, advance racial equality, and confront climate change. To accomplish any of these, however, another pressing issue will have to be tackled. The Biden administration must begin rebuilding Americans' trust in their government and public institutions.

Public trust is deeply intertwined with the reliance on facts and analysis as the basis for political discourse—and research finds that has been on the decline for about two decades, a problem we refer to as “Truth Decay.” Today, large numbers of Americans question the science behind vaccines, are skeptical of government-reported economic and crime statistics, and are more accepting of conspiracy theories such as the baseless one concerning QAnon.

Much like our bridges and roads, America's civic infrastructure—the practices and policies that enable a nation to solve its communal problems—has been allowed to crumble. This has allowed Truth Decay to set in. Reconstructing this infrastructure will require concerted effort across many areas, starting with increasing government transparency, promoting expertise in the executive branch, assembling an inclusive administration, and investing in civic education.

To demonstrate a true commitment to informing and working for the American people, elected leaders and their appointees need to clearly disclose government deliberations, plans, and actions—and then provide honest accounts of both successes and failures. This begins with comprehensive collection and sharing of data and continues with direct reporting to the public by senior officials. Where possible, these standards and reporting requirements should be codified and formalized to ensure they endure beyond the next four years.

Much like our bridges and roads, America's civic infrastructure has been allowed to crumble.

Historical experience underscores the power of this type of transparent accountability for rebuilding trust. For example, the Church Committee hearings in the 1970s investigated domestic spying and covert plots by national intelligence agencies—and that accountability began the process of rebuilding public trust after its Watergate-era nadir.

Transparency also extends to interaction with the news media. Being more forthright and responsive to journalists and, wherever possible, treating the news media as a partner in the responsibility of informing the public also could—by leading through example—help restore confidence in the news media more generally.

Perceived competence is central to public trust, so qualifications must be the deciding factor when the new administration identifies individuals to take on positions of national authority. Ensuring that appointees and agency heads are among the leaders in their fields—and that they assemble similarly qualified teams—would demonstrate a commitment to using facts and analysis as the foundation for tackling challenges facing the country.

History shows us that such an approach could work. In the early 1930s at the start of the Great Depression, federal economic policymakers ignored key pieces of evidence, and as a result the Depression got worse. As the crisis deepened, a reversal ensued. New government agencies were set up to collect and analyze data and launch evidence-based approaches for getting the economy restarted. Individuals with genuine expertise and training were brought in to develop and implement new policies. Over time, trust in government rose. The same approach could work today.

Rewarding expertise—and letting qualified individuals publicly explain the value of fact-based analysis—may also rebuild trust in other areas, such as science. Finally, an executive branch filled with the foremost experts might generate excitement among young people about serving their country through civil service employment.

Research suggests that feelings of trust stem, in part, from feeling included and represented. As a result, ensuring that the next government “looks like America” will be crucial to a civic infrastructure project. Already, President-elect Biden has built diverse transition teams; that will be even more important to the construction of the future cabinet and to appointing the thousands of staffers who will serve across the federal government. This commitment should extend to all levels of the administration, down to the internship programs that serve as feeders for future leaders. Furthermore, diversity should be conceived of in the broadest possible terms—race, gender, economic status, religion, sexual orientation, education, and experience.

Invest in Civic Education and Development

Civic education (PDF) and development activities can help children and adults better understand the foundations of democracy, how the government works and what it provides. It can also bridge divides, creating a sense of belonging and responsibility among people of all generations.

In a 2019 survey, many teachers reported lacking resources and materials to effectively provide civics instruction to children—and our adult population has fewer and fewer common civic experiences or opportunities for civic development.

The new administration might set out to address this by funding student activities or coursework oriented toward encouraging civic responsibility. At the same time, it could convene a bipartisan commission to set standards for civic knowledge and understanding at various grade levels.

The new administration can begin to repair the deep fissures in our society by explicitly and implicitly rehabilitating the nation's civic infrastructure.

A national service requirement for young people could also be valuable in this respect, providing common experiences that break down societal barriers between citizens. Serving the country could also foster a sense of involvement that might bolster feelings of trust in a democratic system of self-governance.

Restoring trust won't occur quickly, nor will progress follow a straight line. But the new administration can begin to repair the deep fissures in our society by explicitly and implicitly rehabilitating the nation's civic infrastructure. The health of America's participatory democracy depends on it.

Michael D. Rich is president and chief executive officer of the nonprofit, nonpartisan RAND Corporation. Jennifer Kavanagh is a senior political scientist at RAND and leads its Countering Truth Decay initiative, which explores the diminishing reliance on facts and analysis in the United States.

This commentary originally appeared on Los Angeles Times on November 19, 2020. Commentary gives RAND researchers a platform to convey insights based on their professional expertise and often on their peer-reviewed research and analysis.