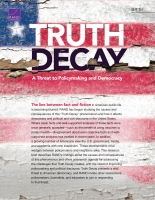 A Threat to Policymaking and Democracy 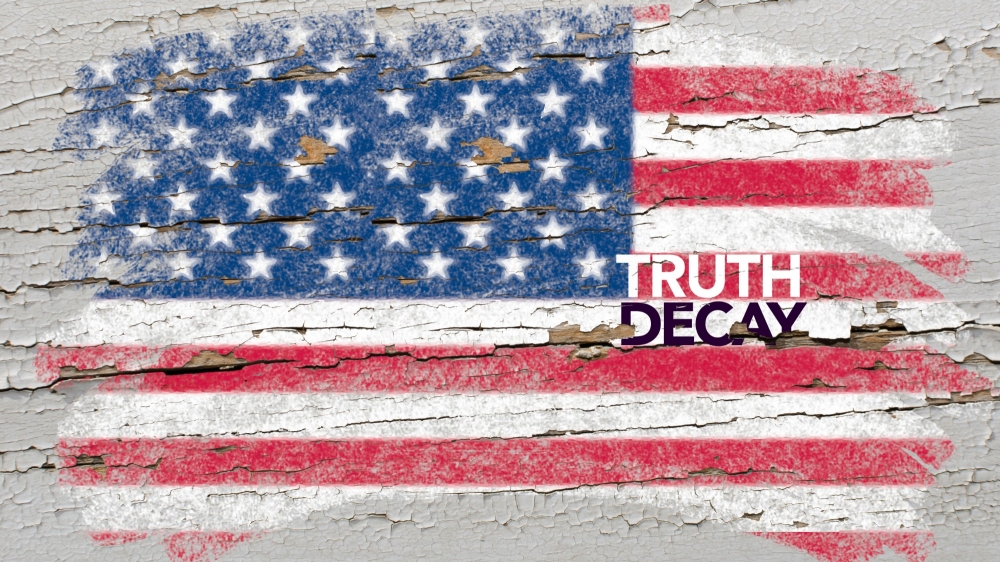 The line between fact and fiction in American public life is becoming blurred. RAND has begun studying the causes and consequences of this "Truth Decay" phenomenon and how it affects democracy and political and civil discourse in the United States. Where basic facts and well-supported analyses of these facts were once generally accepted — such as the benefit of using vaccines to protect health — disagreement about even objective facts and well-supported analyses has swelled in recent years. In addition, a growing number of Americans view the U.S. government, media, and academia with new skepticism. These developments drive wedges between policymakers and neighbors alike. This research brief describes RAND’s findings about the causes and consequences of Truth Decay and offers a research agenda for addressing the challenges this phenomenon creates, with the intent of improving policymaking and political discourse. Truth Decay presents a vital threat to American democracy, and RAND invites other researchers, policymakers, journalists, and educators to join in responding to that threat.

Heightened disagreement about facts and analytical interpretations of data
There have always been differences of opinion within the American electorate. But disagreements about objective facts and topics for which data are reasonably definitive have become increasingly common. Examples include the benefits of vaccines and the safety of genetically modified foods.
The Blurred Line Between Opinion and Fact
Changes in media content and the media business model have contributed to the jumbling of fact, fiction, and opinion. Examples include journalistic content that fails to distinguish between opinion and fact, news programs that rely on commentary rather than factual reporting without clearly labelling them, and social media platforms that allow anyone to become a source of information.
Increased Volume and Influence of Opinion and Personal Experience Across the Communications Landscape
The growth in the volume of subjective content relative to factual information increases the likelihood that audiences will encounter speculation or downright falsehoods. That makes it more difficult to identify key pieces of factual information.
Diminished Trust in Formerly Respected Institutions as Sources of Factual Information
Polling data from across the country show a significant drop, and continuing decline, in public trust in such institutions as the government and the media. Amid confusion about what is fact and what is falsehood, where people should turn for objective, factual information also becomes unclear.

Is This New, or Déjà Vu?

The Gilded Age, known for “yellow journalism” that trafficked in exaggeration, scandal-mongering, and sensationalism.

The Roaring Twenties and the Great Depression, featuring the advent of radio and “jazz journalism,” in which tabloids published sensationalized stories of sex and violence.

The Vietnam War, with “New Journalism” that conveyed writers’ subjective impressions, and widespread adoption of television news as a primary information source.

In all three of these periods, new forms and styles of communication coupled with social, political, and economic unrest contributed to the emergence of at least two of Truth Decay’s key trends: the blurred line between fact and opinion and the increased relative volume of opinion over fact. RAND researchers also found some evidence of declining trust in institutions as sources of factual information in two of these historical periods.

But the current era of Truth Decay stands alone in at least one key way. Researchers found no evidence of fundamental disagreements over objective facts in any of the three historical periods. The present period stands alone in possessing all four trends. New technologies, social media, 24-hour news coverage, and political polarization accentuate the effects of the four trends in the present period, as well.

The good news: Past periods similar to Truth Decay all drew to a close. RAND researchers found that each of the previous Truth Decay periods ended when institutions, such as the government, increased transparency and Americans attached more value to objective facts within political and civil discourse. Further investigation of these eras may lead to lessons on how to rein in some aspects of the current version of Truth Decay.

RAND researchers have identified four main drivers of Truth Decay, conditions that contribute to the phenomenon.

Characteristics of human information processing, such as cognitive biases
Cognitive biases reflect mental patterns that can lead people to form beliefs or make decisions that do not reflect an objective and thorough assessment of the facts. For instance, people tend to seek out information that confirms preexisting beliefs and reject information that challenges those beliefs.
Changes in the information system, such as the rise of 24-hour news coverage, social media, and dissemination of disinformation and misleading or biased information
The volume of information overall has increased dramatically — especially content based on opinion, personal experience, and even falsehood. At the same time, social media and search algorithms can create self-reinforcing feeds of information by winnowing out competing perspectives. Together, these changes drown out facts, data, and analysis.
Competing demands on the educational system that challenge its ability to keep pace with information system changes
The growing number of demands and fiscal constraints on the educational system have reduced the emphasis on civic education, media literacy, and critical thinking. Without proper training, many students do not learn how to identify disinformation and misleading information, and are susceptible to disseminating it themselves.
Polarization in politics, society, and the economy
Segregation across the American electorate along economic, political, and social lines contributes to the development of insular and isolated communities, each with its own narrative, worldview, and, increasingly, even "facts."

People, organizations, or foreign entities can also intentionally or unintentionally amplify the effects of Truth Decay drivers for their own political or economic gain. RAND researchers identified four groups of possible agents:

What Are Truth Decay’s Consequences?

Truth Decay inflicts substantial damage on America’s civic and political institutions and its societal and democratic foundations. Researchers identified four of the most damaging effects:

Unchecked, Truth Decay causes a vicious circle of mistrust among citizens. It can lead them to narrow their sources of information, cluster with people who agree with them, avoid meaningful discussions about core issues, and feel alienated from local and national policy debates. Politics drifts into dysfunction when debate lacks a shared factual basis. In governance, that can lead to delayed decisions, deferred economic investment, and reduced diplomatic credibility.

Where to Go From Here?

Research alone cannot resolve the complex problem of Truth Decay. Research can, however, provide a framework and factual foundations upon which to design, implement, and evaluate responses. RAND calls on other research organizations, policymakers, educators, journalists, and interested individuals to join in shining a light on Truth Decay — and finding solutions. RAND researchers have mapped out four streams of inquiry, and identified questions that need to be answered.

Truth Decay poses a threat to the health and future of U.S. democracy. Reining it in will require concentrated and interdisciplinary effort. RAND is issuing these initial findings and this research agenda as a launch point for those endeavors.