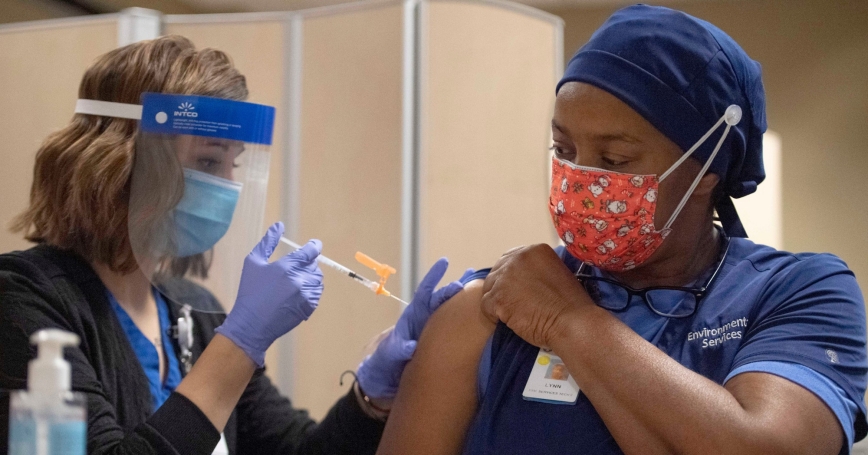 The search for a vaccine against COVID-19 has dominated the 2020 news cycle. Thankfully, research in this area has been accelerated by an unprecedented global effort that has exemplified human ingenuity. With vaccine production and administration underway, the national conversation is turning to deploying an effective immunization campaign to bring an end to the pandemic.

Despite such progress, recent polls suggest that a substantial fraction of the U.S. population is reluctant to roll up their sleeves for a COVID-19 vaccine. Concern about potential side effects and their consequences, no matter how remote the possibility, may be contributing to these reservations. If people assume that they will be shouldering the full financial and personal risks of any adverse side effects, even with the understanding that these are typically rare events, they may decide that the overall risks of volunteering exceed the benefits of vaccination. Evidence from the rollout of a smallpox vaccine in 2003 suggests that health care workers who declined to be vaccinated were more likely to have concerns over adequate compensation (such as money for lost work days or medical expenses) for any side effects than those who volunteered.

The United States currently has two methods for individuals to seek compensation for serious vaccine-related injuries without the need to resort to traditional litigation: the National Vaccine Injury Compensation Program (NVICP), which covers most routinely administered vaccinations for children and adults, and the Countermeasures Injury Compensation Program (CICP), covering certain “countermeasures” against bioterrorism events and pandemics. As of this writing, any person who believes that they may have been injured by a COVID-19 vaccine and is seeking to be compensated for those injuries must first file a claim with CICP.

A substantial fraction of the U.S. population is reluctant to roll up their sleeves for a COVID-19 vaccine.

In both programs, a vaccine is the presumed cause of an adverse medical condition if the description and the time of onset of the condition matches up with criteria listed on “vaccine tables” created by the Department of Health and Human Services (HHS). This presumption greatly reduces the burden upon the claimant to prove causation, an often difficult task in traditional litigation. Under the NVICP, for example, if a recipient of a rubella vaccination (PDF) first develops chronic arthritis between 7 and 42 days after the injection, it is presumed that the injury was caused by the vaccination. At that point the inquiry turns to calculating the size of the compensation award based on the claimant's financial losses and the benefit rules for the program. A similar table for CICP claims involving COVID-19 vaccinations has not yet been published, but presumably one will be issued in the future. Until such time, HHS advises claimants that they will have to “demonstrate” that the injury occurred as the direct result of the administration or use of a COVID-19 vaccine “based on compelling, reliable, valid, medical, and scientific evidence.”

One major difference between the two programs lies in the benefits potentially available to claimants, though both cover all reasonable medical expenses. The NVICP (PDF) places no limitations on lost income, whereas the CICP caps such claims at two-thirds of the loss and limits recovery to $50,000 for each year out of work.

The CICP does not provide any compensation for pain, suffering, emotional distress, or similar damages, while the NVICP allows up to $250,000 for such losses. The NVICP also allows “good faith” claimants to recover reasonable attorney's fees and legal expenses regardless of the outcome of their claim; in contrast, the CICP requires all claimants to cover their own attorney's fees and costs. The CICP does offer more generous benefits for surviving family members if the vaccination resulted in death, but fatal vaccine injuries are extremely rare.

A second difference involves transparency and infrastructure. Little is known about how the CICP works in actual practice as its decisions cannot be reviewed by the public, and detailed statistics have been available only by submitting a Freedom of Information Act request. In contrast, the NVICP publishes monthly updates on its claim processing and compensation decisions. The NVICP has handled more than 20,000 (PDF) vaccine injury claims since its inception, while the CICP, as far as can be determined, has processed about 500 since the law that created the program was enacted in 2005.

These distinctions may be related to the origins of the two programs. The CICP is the outgrowth of a very similar process created to address compensation concerns of smallpox vaccine recipients during the invasion of Iraq. That vaccination campaign was primarily intended to protect civilian first responders and military personnel if the smallpox virus was used as a weapon of war or terrorism. Such events would be rare occurrences, and arguably the target population of the vaccine would almost certainly have access to employer-provided health insurance and workers' compensation coverage to take care of medical expenses and lost work time. As the successor to the smallpox program, the CICP offers essentially identical benefits to current claimants. In contrast, the NVICP was designed to compensate individuals receiving vaccinations related to routine health needs, such as protection from measles, hepatitis, or seasonal flu. These vaccinations are offered to hundreds of millions of Americans each year as part of “one of the most spectacularly effective public health initiatives this country has ever undertaken,” and to maintain that success Congress intended to create a compensation program marked by “certainty and generosity” (H.R. Rep. 99-908).

The question here is whether the current compensation approach will impact the willingness of some Americans to sign up for COVID-19 vaccinations. There is certainly a potential for inequitable treatment, in which some people with similar injuries and losses from a vaccination will receive different benefits depending on which compensation program applies to them. Similarly, a CICP that is unprepared to process claims arising from even a very small subset of the possibly 300 million vaccinations may find itself with a considerable backlog. Instances where compensation payments stemming from COVID-19 vaccinations are limited compared to those for an ordinary flu shot under the NVICP or where there are lengthy delays in determining eligibility might receive considerable attention from the media which, in turn, could reduce participation in the vaccination campaign.

Policymakers might consider two options to address possible concerns on the part of the campaign's target population. The first would be to amend the benefits available under the CICP for COVID-19 vaccine adverse effects so that they mirror those available under the NVICP, thus addressing any disparity in compensation.

Policymakers and the public should carefully consider what types and levels of compensation for any adverse effects of vaccination are truly fair and appropriate.

A second option could take that idea a step further by moving COVID-19 claims processing to the NVICP, reducing the possibility that such claims would overwhelm an unprepared decisionmaking process. While the NVICP is by no means a perfect alternative to litigation, its infrastructure is established, its activities are transparent and its decisions are predictable.

In the campaign that will soon unfold, Americans may be asked to volunteer their immune systems not simply for their own health, but also for the welfare of the larger community, despite the possibility that some recipients will experience side effects. To enhance the effectiveness of the campaign as well as to address equity for any of those who might unfortunately suffer serious injuries, policymakers and the public should carefully consider what types and levels of compensation for any adverse effects of vaccination are truly fair and appropriate.

Nicholas M. Pace is a senior social scientist at the nonprofit, nonpartisan RAND Corporation. Lloyd Dixon is director of the RAND Kenneth R. Feinberg Center for Catastrophic Risk Management and Compensation, and a senior economist at RAND. Bethany Saunders-Medina is a policy analyst at RAND.

This commentary originally appeared on The Hill on December 17, 2020. Commentary gives RAND researchers a platform to convey insights based on their professional expertise and often on their peer-reviewed research and analysis.