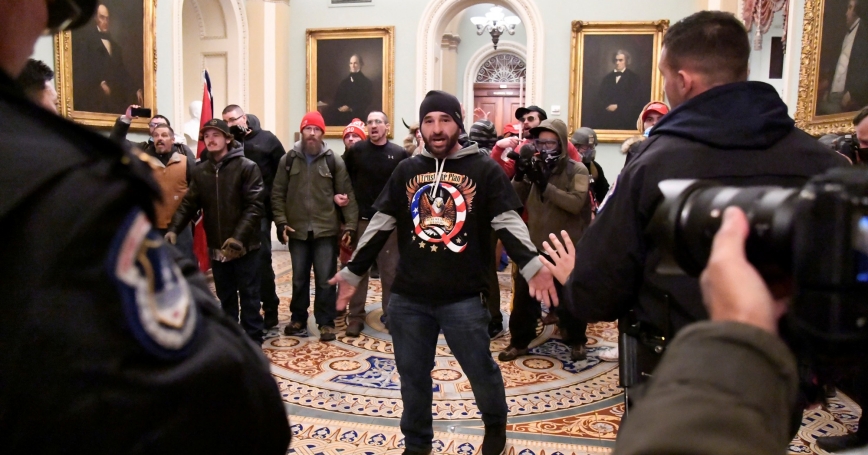 Supporters of President Donald Trump confront police in the U.S. Capitol near the entrance to the Senate, in Washington, DC, January 6, 2021

The history of politically charged violence in and against the United States can be read in the reports of its national commissions. The Warren Commission investigated the Kennedy assassination. The Kerner Commission looked at the causes of urban uprisings in the 1960s. Terrorist attacks from the 1983 Beirut bombings to 9/11 prompted the creation of commissions aimed at coming to grips with the growing threat.

The takeover of the U.S. Capitol on January 6 demands such an inquiry. Last week, a bill to establish a national commission to investigate the attack was introduced in the House.

A single determined shooter could have turned the attack on the Capitol into a massacre. Hostages could have been taken. Bombs could have been planted. Fires set. A branch of the federal government has not been so seriously threatened since 9/11. Already inspectors general of four federal agencies have begun investigations of security and intelligence.

A January 6 Commission would be different. Accountability needs to be addressed, but it would do more than affix blame.

Security failed spectacularly—perhaps the one point Democrats and Republicans can agree on. Insulated from the partisan passions that sunder our politics and our society, a January 6 Commission created by Congress or the Biden administration could analyze whether this was an isolated uprising or the harbinger of more to come. It could make recommendations to prevent such attacks in the future in Washington or at statehouses throughout the country.

Commissions conduct impartial inquiries, assemble experts, level hard criticism when warranted, and express opinions that others (including members of Congress) may want to make but cannot state publicly. They are temporary and have no authority beyond the persuasiveness of their findings. Required to produce a public report, commissions come to see the American people as their primary constituency, the national interest as their sole guide.

Insulated from the partisan passions that sunder our politics and our society, a January 6 Commission could analyze whether this was an isolated uprising or the harbinger of more to come.

They assume a nobility as they try to provide an accurate historical record of events. The 9/11 Commission report is still the most authoritative source on the attacks. A 1/6 Commission could provide a detailed chronology that looks at the political setting before November's presidential election and the contentious atmosphere that followed it leading up to January 6. It could attempt a minute-by-minute account of what happened from the time a crowd gathered at the White House to when the Capitol building was cleared hours later.

A factual account can counter the inaccuracies of instant reporting, the mythology that often follows such events, and to a limited extent, the inevitable conspiracy theories that arise. However, the Warren Commission's detailed investigation of President John F. Kennedy's assassination reassured an apprehensive nation but did not prevent the emergence of a robust conspiracy-theory industry. Within hours of the January 6 attacks, conspiracy theories raged across the internet.

The home of the U.S. Congress was invaded by Americans, many of whom describe themselves as patriots—a significant point. If they were merely vandals, devoid of intellectual or spiritual impetus, this would be an easier security and law enforcement problem. It's unclear, however, if this was merely a disorganized horde or whether at least some of the mob was following a preconceived plan. Was the ultimate intent a disruption, a demonstration of contempt, a warning?

A commission might help unravel this too. Some have argued the invasion meets the official definition of terrorism—using violence to intimidate or coerce a government toward social or political objectives. Some have used the word “insurrectionists,” a 19th century-sounding term, to describe the attackers; some of those who led them have been charged as conspirators. Still others describe what happened January 6 as an “attempted coup.” All of these may be correct, but which will best guide future security needs, or be the most useful legal framework for prosecution?

Examining the astonishing inadequacy of security on January 6 would be a commission's primary mandate. Regardless of whether there was a discernible warning, violent demonstrations at the Capitol should have been anticipated. They followed a year of protests in Washington, and groups with known histories of violence were again gathering there. Internet chatter about smuggling guns into the capital had been reported by the news media. Those who falsely asserted that the November election was fraudulent saw Congress meeting January 6 to certify electoral college votes as the last opportunity to change the outcome. Yet “no one” thought the Capitol building might be a target?

Examining the astonishing inadequacy of security on January 6 would be a commission's primary mandate.

Jurisdictional issues may have gotten in the way because the Department of Homeland Security decides what qualifies as an event requiring the highest level of security. The department comes under the executive branch while the Capitol Police operate under congressional authority. Political biases or pressures may have come into play. Having an acting DHS secretary may have inhibited planning as well.

Many in the Capitol Police performed bravely under dire circumstances, despite being badly outnumbered—a fact reflecting a disastrous command decision that may have discouraged resistance. But disturbing reports suggest some officers may have had affinity with the invaders. This raises further questions about the leadership, recruitment, and training of the Capitol Police—and about the adequacy of oversight. Did members of Congress simply assume they would be adequately protected? At least one member raised the issue before January 6.

The mass demonstrations and riots of the 1960s, the terrorist takeovers of the 1970s, and the truck bombs of the 1990s each required changes in security measures and response. Facing large, potentially violent groups requires rethinking how to protect officials and enforce the law without escalating the situation.

No commission can be expected to heal the deep divisions in American society and politics. But it could address a fundamental question: How do we maintain the reality and appearance of open government that guarantees the public access to their officials while protecting those officials—physically and psychologically—from intimidation and terror?

Brian Michael Jenkins is a senior advisor to the president of the nonprofit, nonpartisan RAND Corporation. He has been researching terrorism for RAND since 1972.

This commentary originally appeared on Los Angeles Times on January 19, 2021. Commentary gives RAND researchers a platform to convey insights based on their professional expertise and often on their peer-reviewed research and analysis.