Afghanistan: Give Peace a Chance 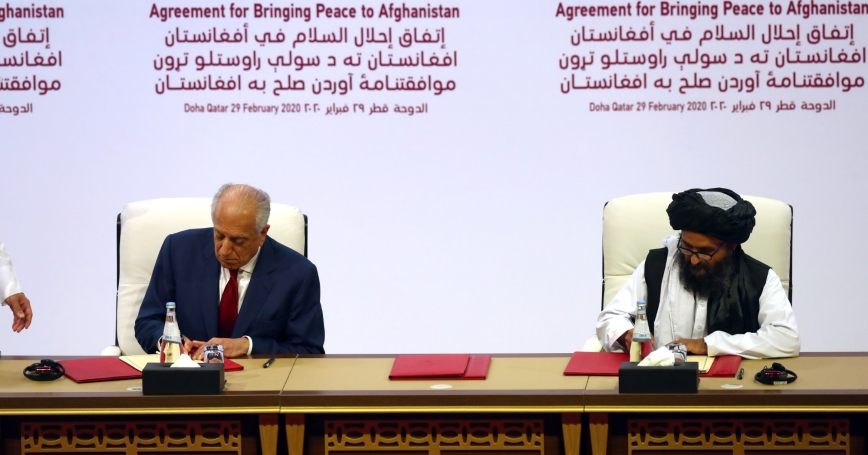 Among President Trump's few foreign policy achievements was brokering the opening of face-to-face peace talks between the Taliban and the Afghan government, a goal that had eluded the Obama administration. The price for this success, however, was U.S. agreement to an accelerated timetable for a full military withdrawal unlinked to the outcome of these talks. This agreement was concluded on February 29th of last year. In it, the United States promised to withdraw all its forces from Afghanistan within 14 months, that is by this coming May, by which time, it was hoped, the two Afghan sides would have concluded a peace agreement.

So far, predictably, these negotiations have progressed very slowly. A preliminary exchange of prisoners, supposed to take a week, took several months. As a result, the two sides did not sit down together until September. The rest of 2020 was spent negotiating principles and procedures for the talks. In January, the two sides exchanged proposed agendas. The contents were similar, but the order of preference was not. The Afghan government wants a general cease-fire to be the first item agreed. The Taliban wants it to be the last.

Given the gulf that separates the two sides, this pace is not unusual. Peace in Afghanistan is not simply a matter of allocating provinces and ministries among the various government and Taliban factions. It requires accommodations between modernity and fundamentalism, between governance based on popular sovereignty and on divine inspiration, and most of all it requires agreed means of forging two warring armies into a unified national security establishment. Closure on such fundamental issues will require wrenching concessions from both sides.

Peace in Afghanistan is not simply a matter of allocating provinces and ministries among the various government and Taliban factions.

The timetable set out in the U.S.-Taliban agreement was always unrealistically ambitious. The two Afghan sides have not yet even agreed on a common agenda, yet the United States is expected to fully remove its forces within four months. The American military presence is the principal source of U.S. influence over these negotiations and the only hope of leaving behind a stable government capable of denying sanctuary to al Qaeda and the Islamic State. That leverage also represents the Afghan people's only hope of a peace that preserves their economic, social, and political gains of the last 20 years.

U.S. officials are not satisfied that the Taliban have fulfilled their commitments to cut ties with al Qaeda and lower the overall level of violence. None of the other deadlines contained in the U.S.-Taliban agreement have been met. As the congressionally mandated Afghanistan Study Group has recommended, the date for the final U.S. military withdrawal should be slipped as well.

As noted, the two Afghan sides are nowhere near agreement on any issue of substance. Given the looming May deadline, there is a temptation to postpone addressing the many issues which separate the two sides and move instead to the divvying up of portfolios for an interim coalition government including Taliban participants. This would require jettisoning the existing constitution without agreement on another, overturning an election without holding another, and sharing with the Taliban control of the Afghan national armed forces while leaving Taliban forces at large. Such an interim government would be highly prone to collapse under the weight of its many unresolved differences.

When it did so, the Taliban would likely emerge intact, but the other factions would have a harder time reestablishing the national government they had dismantled. Major components of the Afghan National Army, police and intelligence service could begin transferring their allegiance to regional warlords and ethnically based factions. Conflict could become multisided with the Taliban emerging ascendant.

If the Biden administration agrees with the Afghanistan Study Group's recommendation to postpone the May U.S. withdrawal, this could provide the two Afghan sides more time to address the core issues that must be resolved if any settlement is to stick. These issues include modifications to the current constitutional order, arrangements to monitor and enforce a permanent cease-fire, procedures to amalgamate the two opposing armies, and provisions to reintegrate former fighters back into civilian life. This will not go quickly, but experience with many other peace processes suggests that this is the only way to assure a durable result.

James Dobbins, a senior fellow and distinguished chair in diplomacy and security at the nonprofit, nonpartisan RAND Corporation, is a member of the Afghanistan Study Group. He served as President Bush's special envoy for Afghanistan in 2001–2002 and the Obama administration's special representative for Afghanistan and Pakistan in 2013–2014.

This commentary originally appeared on The Hill on February 9, 2021. Commentary gives RAND researchers a platform to convey insights based on their professional expertise and often on their peer-reviewed research and analysis.