Domestic Violent Extremists Will Be Harder to Combat Than Homegrown Jihadists 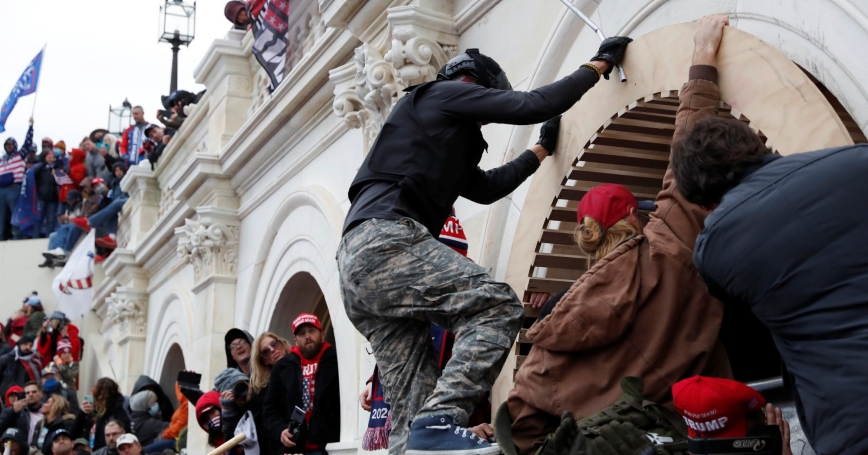 Trump supporters scale a wall during an attack on the U.S. Capitol, Washington, D.C., January 6, 2021

The Biden administration has said it will take steps to combat domestic violent extremism. While the move comes close on the heels of the January 6 attack on the Capitol Building, the nation has witnessed recent acts of violence stemming from both far-left and far-right extremists.

The announced actions—conducting a comprehensive threat assessment, coordinating intelligence sharing, disrupting networks, trying to prevent radicalization—might have a familiar ring. They're similar to the post-9/11 response to thwart terrorist attacks launched from abroad and later homegrown jihadists, which have been largely successful. While these are solid steps, for a variety of reasons shutting down domestic extremists will prove far more difficult than combating homegrown jihadists.

Jihadist ideology, with few exceptions, gained very little traction in America's Muslim communities. In contrast, the beliefs driving today's domestic extremists are deeply rooted in American history and society. Precisely for that reason, some law enforcement officials argue against coming down too hard on those involved in the 1/6 assault, perhaps fearing that doing so might provoke the kind of bloody confrontations witnessed in the early 1990s.

The jihadists never had a supportive constituency in the United States. They responded as individuals to exhortations from groups abroad. Indeed, many of the tips that led to arrests reportedly came from within the Muslim community. There were no continuing terrorist campaigns. Plots and attacks were one-offs. But domestic extremists have a sympathetic base.

Hindered by FBI infiltration, far-right extremists long ago adopted a strategy of “leaderless resistance,” avoiding a hierarchical structure and instead relying on local autonomous cells to carry out attacks on behalf of the cause. What is new about today's domestic extremists is their mobility—moving across the country to participate in action. This creates contacts and coalescence. It requires coordination and logistics. Social media has added a new and dangerous dynamic. Organizationally, these groups may be maturing.

The Nation Has Not Been Galvanized

The unprecedented 9/11 terrorist attacks bound the country together in a fervent national effort to prevent further attacks. But domestic extremist attacks thus far have not unified the nation. The 1995 Oklahoma City bombing—the second-worst terrorist attack in the United States—did not generate a similar response nor has the January 6 assault on the Capitol Building. Indeed, political differences appear to have become more intense and will hamper federal efforts to counter violent domestic extremism. Any attempt to legislate new counterterrorism statutes or expand the list of terrorist groups—already an arbitrary designation—will prompt fierce arguments about the definition of terrorism and who is a terrorist.

They are part of an American gun culture. Their acquisition and display of personal arsenals reflect their defiance of any effort to limit what they see as their Second Amendment right to bear arms. The jihadists never had this, although they also could get guns and carry out deadly attacks. Gunning down unarmed civilians requires fanaticism, not advanced training, but to move beyond a lone shooter will require operational skills.

Many Right-Wing Extremists Have Military or Police Training

A few American jihadists had served in the military, more sought to join the army, but for the most part they were untrained. There are concerns that extremists have recruited veterans, and that extremist ideologies have penetrated the armed services and police departments. It's unclear how pervasive the problem is, but it could undermine trust and cooperation between federal authorities and local police departments.

Preventing Radicalization May Not Work

The idea of intervening before a crime is committed was promoted by the Obama administration as an alternative to a purely law enforcement approach—preventing radicalization instead of incarceration. These efforts provoked resentment in Muslim communities and it is not clear how effective they were. The idea of the federal government patrolling ideology to identify dangerous beliefs will provoke outrage and raise civil-liberties concerns on both the left and the right.

The Environment for Intelligence Collection Will Be Less Permissive

Domestic intelligence collection in a democracy is always a delicate undertaking. Material support statutes and the fact that the public and courts viewed jihadists as part of a foreign threat (even though a majority were U.S.-born citizens) gave authorities unprecedented latitude in their investigations. Containing jihadist terrorism was an intelligence success, although many aspects of the Patriot Act remain controversial. Law enforcement will have less latitude in monitoring domestic extremists.

Prosecutions Will Be More Difficult

Jihadist defendants were brought before judges and juries, but that did not prevent bias. The fact that many of them were named Mohammed may have made it harder for them to get a fair hearing in court. Many pleaded guilty to avoid even longer sentences. Things will be different in dealing with domestic extremists who may be able to count on at least one sympathetic juror.

Co-Option Strategies May Not Work This Time

Historically, the American political system has been adept at co-opting issues and addressing these grievances, thereby separating violent extremists from potential constituencies. Government, of course, should deal with the conditions underlying the hostility on display. But government cannot, under threat, compromise with those whose views are antithetical to unalienable rights and American values.

We must be realistic in our expectations. It took more than a decade to shut down the terrorist groups of the 1970s and decades to break up the Ku Klux Klan. The threat posed by homegrown jihadists is still ongoing after 20 years. The domestic extremists now threatening the peace are the latest incarnation of beliefs and quarrels reaching back to the 19th century. They may be contained, but never entirely rooted out.

Brian Michael Jenkins is a senior adviser to the president of the nonprofit, nonpartisan RAND Corporation. He has been researching terrorism for RAND since 1972.

This commentary originally appeared on The Hill on January 31, 2021. Commentary gives RAND researchers a platform to convey insights based on their professional expertise and often on their peer-reviewed research and analysis.