Stabilizing China-India Relations in 2021: Is This Possible? 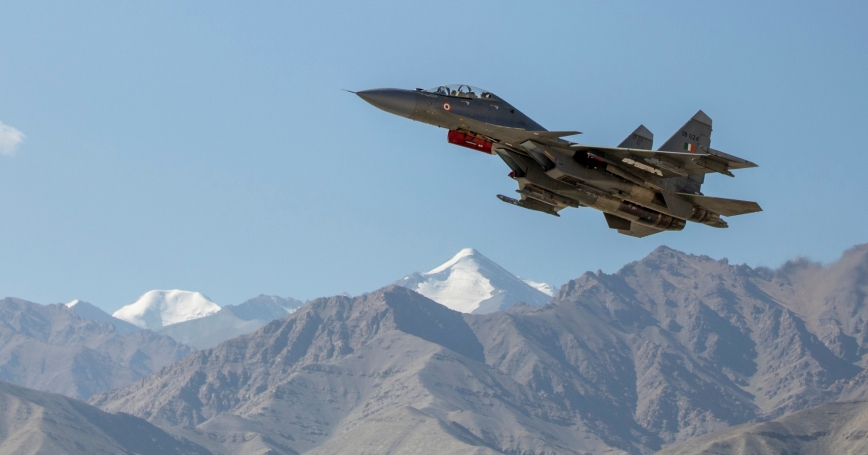 An Indian fighter plane flies over a mountain range in Leh, in the Ladakh region, India, September 15, 2020

China-India relations seem to be at their lowest point in decades. To head off the risk of escalation, it could be in the interest of both nations to look for ways to improve a relationship that is at once one of the world's most important and most dangerous.

In June 2020, Chinese and Indian soldiers confronted each other in the disputed area on their western border known as the Galwan River Valley. Although not publicly admitted by either side (presumably, for fear of domestic political repercussions within India), China is believed to have taken control of at least twenty square miles of Indian controlled territory following the incident. Implicitly, this is recognized by India which has made repeated requests to China to pull back its troops to the Line of Actual Control (LOAC) that preceded the incident. There has been no progress since, despite eight rounds of military-to-military level talks at the disputed site. India subsequently imposed economic sanctions on China, leading to lost contracts worth several billion dollars, again to no avail.

The immediate provocation for the incident was India's construction of a feeder road to the LOAC in 2019. China had complained to India in May that it raised the likelihood of quick forward deployment of troops against China. India ignored the complaint suggesting that it had the right to build infrastructure in territory under its control, even if disputed. A month later, China sent troops to the disputed area and India responded by sending its troops to the area. There were casualties on both sides, marking a change from the decades of mutual understanding between the two countries that they would not use firearms or kill the personnel of the other side.

A similarly tense situation had been created in the region of Doklam in 2017, in an area of dispute between Bhutan and China and close to the border with India. Similar to the Ladakh incident, but with roles reversed, India had then intervened on behalf of Bhutan by sending troops to confront Chinese road-building crews working in the area. In response, China sent troops to the disputed site. Fortunately, the situation was resolved within a period of three months, with agreements at the level of ground military commanders on pulling back to earlier locations of deployment. However, China resumed its road-building program in Doklam. Prime Minister Narendra Modi and President Xi Jinping subsequently held meetings in 2018, wherein they agreed to a consultative process for resolving issues.

It seems that China and India took different lessons from Doklam that they have applied in Ladakh. The lesson for India was that its intervention in Doklam had no long-term effect on Chinese road construction and that it should therefore consolidate its hold on the disputed lands under its control quickly through road construction, troop placements and other means. The lesson for China was that the difference in military capacity between the two countries allows it to take actions, such as taking Indian-controlled territory in Ladakh, that India cannot take.…

This commentary originally appeared on The National Interest on February 2, 2021. Commentary gives RAND researchers a platform to convey insights based on their professional expertise and often on their peer-reviewed research and analysis.