The Pandemic Is Completely Changing the Way We Treat Unemployment 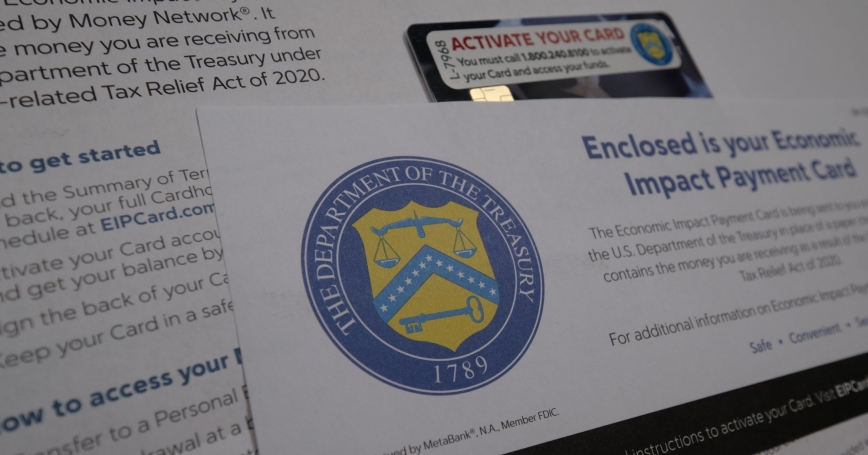 An Economic Impact Payment Card for money received as a result of the COVID-related Tax Relief Act of 2020 in Portland, Oregon, January 25, 2021

As Congress considers further coronavirus relief, most of the attention—and debate—has been focused on the stimulus payments sent to many American families. President Biden has proposed adding $1,400 to the $600 payments that were delivered in the relief bill signed by President Donald Trump in December. Some progressives want that additional check to be for $2,000.

That's an important discussion, but it has tended to overshadow the true policy innovation of this recession: The bold federal intervention in the state-financed and state-administered unemployment insurance program. The CARES Act, in March, provided $600 in federal money per week on top of state benefits to people who lost their jobs. The sequel bill, passed in December, extended the benefits through March 14 and included a lower, but still substantial, federal payment of $300 weekly (which Biden wants to bump up to $400).

Unemployment insurance is the most important fiscal response the United States has during a recession, because it sends timely, targeted, and temporary financial assistance to those directly affected by the downturn. What the CARES Act created—remarkably high benefits for more workers—was a short-term experiment born of necessity, but it could have a lasting influence on public policy. It adds some options to Congress's “recession toolbox.” What's more, the behavior of the people who received the benefit could reshape how we think about public assistance.

Policy experts have long known that the existing unemployment insurance system is not up to a national crisis.

Policy experts have long known that the existing unemployment insurance system—designed in 1935 and not reformed on the federal level since 1976—is not up to a national crisis. It comprises 53 separate programs run by the states, D.C., and two territories. The benefits they award are determined by state legislatures; they are intended to replace half of lost wages but vary widely. In Arizona, for example, the maximum benefit is $240 (PDF) per week, which replaces half of earnings only if you make less than $25,000 a year, and which could not cover median rent for a one-bedroom apartment in Maricopa County ($1,111). The maximum benefit, next door in New Mexico, is $442. Similar variability exists in terms of how much, or how long, you need to have worked to qualify for benefits and how long you can receive them—from less than 10 weeks to 26.

And the trust funds that finance them in many cases sit at dangerously low levels—19 of them are in the red. The Government Accountability Office (then called the General Accounting Office) warned in 1993 that poor state administration was causing the unemployment insurance program to fail to meet its basic objectives. Three recessions later, the GAO is still right: The subsidies are inadequate and the finances often shaky.

As the economic consequences of the pandemic were crashing down on the country last spring, Congress took stock of the situation and concluded that state programs would not be generous enough to meet the moment, but also not nimble (PDF) enough to quickly change. So Congress created a supplementary program and settled on the $600-per-week figure. It also established a parallel program (Pandemic Unemployment Assistance) for freelancers, gig workers, the self-employed, and others whom state programs left out.

The $600 weekly add-on meant that, for a time, many workers—more than two-thirds, by one estimate—earned more from unemployment benefits than they had on the job, probably a first (in any program) in U.S. history. That development taught us a great deal about benefits and incentive effects.

In the United States, we have a deeply ingrained belief that cash benefits disincentivize work, but this understanding tends to be one-dimensional: that any benefit, of any amount, reduces the incentive to work. Last summer, we got proof that there are multiple dimensions to the benefit-work trade-off—and that, in general, people want to be employed.

When businesses reopened, workers went back to their old jobs at the same rate, regardless of whether their benefits were less than or more than their previous earnings.

One important question was: Would a worker take her old job back if she was getting truly substantial unemployment benefits? To answer this, researchers at Yale (PDF) examined data from Homebase, a software used by small businesses to manage their staff schedules. It includes hundreds of thousands of workers. The researchers could see companies lay off and rehire employees, and found that when businesses reopened, workers went back to their old jobs at the same rate, regardless of whether their benefits were less than or more than their previous earnings.

There was a second, related question: Would firms be able to hire if they were competing with these high benefits? A separate study examined applications to job vacancies posted on Glassdoor. Those researchers found that the number of applications per vacancy increased during the period the $600 add-on was in effect; they concluded that the generous benefits did not prevent firms from hiring, if they were looking.

In a labor market with more than 150 million workers, there's little doubt that some people turned down their old jobs, and some businesses had a hard time filling openings. But this rigorous research found that wasn't the average experience.

Why didn't the workers who could have stayed home with no loss in income do so? Because, for the most part, they understood that a permanent job has a much higher value than a temporary benefit. A decision about a job, after all, is based not on next week's paycheck but on income for next year and beyond. This is the same calculation that millions make when they attend college—forgoing income and maybe taking on debt—instead of working full-time during those years. Or when people quit a job to go to graduate school. A temporary benefit, even a large one, has a lower value than a long-term job. The $600 bonus was akin to an extreme test of this theory, and it largely validated it.

Other research, predating the pandemic, has found that after a permanent job loss (as opposed to the temporary layoffs that largely characterized the 2020 downturn), more generous unemployment benefits lead to a better job match: Workers tend to stay on unemployment longer but find higher-quality and higher-paying jobs. This is additional evidence that workers' decisionmaking, even when they are unemployed, is driven by calculations about long-term income.

The changes Congress made to unemployment insurance have been temporary, but some of the features could endure. It seems unlikely that Washington will ever again rely solely on the rickety, state-based system during a recession.

The precedent of adding federal money to state benefits, however, creates unfortunate incentives. If states know that Congress will intervene to raise benefits when the economy is bad, they have even less reason to maintain the solvency or generosity of their own programs. This is one reason some policy experts think the system should be fully federalized. Congress must act during recessions to stabilize the economy, and it can do so either by pouring money into 53 ill-funded programs with differing benefit amounts and eligible populations, or by working through a single, top-down, efficient program.

The benefit paid to people who are out of work should not be higher than a wage, generally speaking, but it also need not be as low as possible.

The benefit paid to people who are out of work should not be higher than a wage, generally speaking, but it also need not be as low as possible, recent experience shows. One way to mitigate what disincentives exist is to put unemployment insurance on an “automatic trigger,” meaning that the amount and duration of benefits would change as economic indicators did (for example, decreasing as the unemployment rate dropped).

There's a reason unemployment insurance has been allowed to languish: The unemployed neither are a permanent constituency that can advocate for themselves, nor do they garner much sympathy in our work-driven society. (Want to recover economically? Get a job.) But in April 2020, unemployment reached nearly 15 percent, the highest since the Great Depression. Between then and June, the net number of jobs in the economy declined by 14.6 million (PDF). Given the circumstances, it was impossible to argue that these people were in any way at fault.

Tens of millions of people sought support from a program they might not have heard of before 2020—and what waited for them was so dysfunctional that they lined up and slept outside to get help processing claims, and heard politicians admit that the application process had been made difficult on purpose. An unfortunate few got lost in the shuffle to such a degree that they still haven't received a benefit. The federal intervention didn't solve these problems.

Many Americans have a fresh understanding of the need for robust unemployment insurance, while researchers have new evidence that there are few downsides to generosity during a recession. And policymakers have yet more proof that state programs alone are insufficient. What does that add up to? Little reason to keep the program as is.

This commentary originally appeared on The Washington Post on January 29, 2021. Commentary gives RAND researchers a platform to convey insights based on their professional expertise and often on their peer-reviewed research and analysis.